Is Telling the Truth a Good Enough Reason to Ruin Game Night?

Listen, game nights are sacred. There’s a social contract, I think, that if you’ve got a good enough group of friends to make game nights happen, on those nights you do your best to get along and not rock the boat, right?

That may be so, but I imagine there are things that are hard to let slide – like what happened on this particular night, when a game night went down in glorious flames.

A few nights ago, I hosted a game night for a small group of friends (we had all been quarantining and following the proper guidelines in my county). It was only going to be 5 of us (including me), but one of my friends texted me last minute that she was going to bring a coworker from work (Matt-fake name). Fine with me.

We started playing a card game where you answer questions about yourself; based on the level (Level 1, 2, 3), the question could be extremely surface level (ex. what’s your favorite color?) to something deeper (ex. what characteristic of yourself do you not like about yourself?). Everyone was enjoying themselves, and I was happy with the way things were going.

Cue a question I drew: “What’s the hardest thing you’ve ever had to go through?”

Some backstory: My sister passed away a few years ago when I was still in high school. I was pulled out of class and flew immediately to her college and watched her die in the ICU. Needless to say, this is probably the hardest thing I’ve been through. 3 of my friends in the group knew about this, the other 2 and Matt did not.

I didn’t want to bring the mood down, so I answered that the hardest thing I’d been through was transitioning going to a college in a different state where I knew no one. We were all ready to move on, but Matt immediately piped up and said, “Wow, if that’s the hardest thing you’ve ever been through, you live an extremely privileged life.”

Everyone got quiet. Now, if he had said it jokingly, I probably would have let it go and moved on. However, the way he said it was in a very condescending and patronizing tone, and I will admit, it rubbed me the wrong way. Instead of letting it go, I said “well, the hardest thing I’ve ever been through is seeing my sister die in the ICU and having to watch her being lowered into her grave when I was 17. I just didn’t want to bring the mood down.”

If things were quiet before, they were dead silent now. Matt mumbled an apology but game night ended shortly after. After my friends all left, my friend who had brought Matt texted me and told me I was a jerk for making Matt look bad, and I could have just let his statement go. I do feel bad about what I said and being the cause of game night ending so soon, but I also feel like I was just making a justified statement.

Cue the comments, the top one of which kept it simple but sweet. 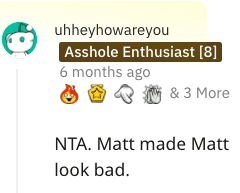 And this one, which agreed and said keeping the peace isn’t the be-all, end-all goal. Or, it shouldn’t be. 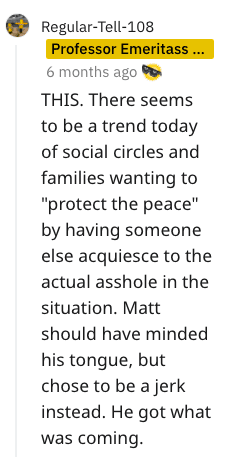 Most people pretty much agreed that Matt was the stranger, and he really should have acted accordingly. 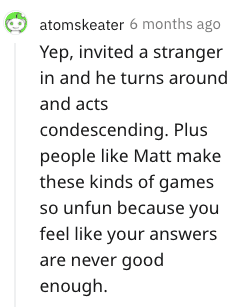 On the plus side, now they’ve got an inside joke? 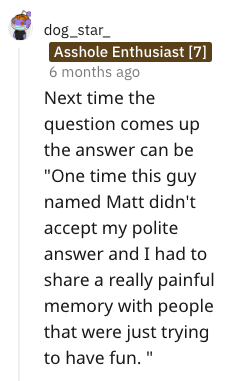 This person pointed out that Matt even had the change to apologize and didn’t, too. 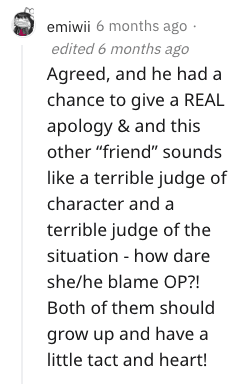 This one was a bit more borderline for me, but probably just because I’m from the Midwest and was raised to keep the peace.

What do you think? Share your own take down in the comments!