Is It Reasonable To Expect A Spouse To Manage Your Medical Condition?

There are a lot of misconceptions out there about love and marriage. They’re different for everyone, but suffice to say, whatever you believe, reality will never quite live up to what you expected.

For instance, some people think a spouse’s job is to care for you in the same way that your parents did, and well…that’s not always the case (nor should it be).

In this rather extreme example, OP states that her brother was diagnosed with diabetes as a child.

Rather than teach him how to manage it or let him see what the consequences could be if he didn’t, their parents simply did all of the hard work for him.

My brother “30” is diabetic. Has type 1 diabetes and got it from when he was young. As his older sibling I grew up watching my parents managing this condition for him, he has always been traumatized by this condition and never come to terms with it so what he used to and still does is act like his condition doesn’t exist.

The family (mom is now deceased) didn’t know how to handled it because if we let him act like that then there would major consequences so we took it upon ourselves to manage his condition for him.

We’d watch his eating habits and correct them, watch his insulin intake, and encourage him to live healthy.

When he got married they informed his wife how things had been and that she would need to help him manage his disease, but as time went on, she began to hate arguing with him over every little thing.

When he brought his now wife home, We told her how it is and that he can be reckless and ..in denial about his condition and so she needed to help and work with us and keep an eye on him.

She did her best at first but started caving in to his complains about not being able to eat this or that or when he complains about his insulin intake and having to pay for it.

Recently, the brother ended up in the hospital due to an episode that was no one’s fault but his own.

That said, OP thought berating his wife about how it was really her fault was the way to go.

He got increasingly worse the past 3 months. We didn’t know exactly what was going on til his wife called to tell us he was in the hospital because of a hyperglycemic episode. His blood-sugar levels were too high he almost went into a diabetic coma. The reason for this was because he wasn’t taking the right dosage of insulin.

I talked to his wife and had an argument with her, she said he deliberately kept stretching out his insulin dosage to be able to save insulin and not have to buy it. I told her still she should’ve had kept an eye on him.

It’s unfortunate that their insurance is screwed and financial situation is rough but she should have stopped him and not stood there watching.

She said I was being too hard on her but I told her that if he was doing this under the family’s watch we wouldn’t have allowed it and so she bears part of the blame for him staying in the hospital.

She started crying and asked for a minute for herself. I went home because I couldn’t see him after waiting for long.

His father told him he was too hard on the wife and that he should apologize, but OP says she knew the facts when she married him.

My dad called later asking about my conversation with sister in law. I refrained from talking about it but he said she called him and told him everything. He said I shouldn’t have said this to her and made her feel guilty.

I said I was just disappointed she let this happen and expected her to be the responsible one if my brother wasn’t.

He said I have to apologize but I’m unsure whether I was completely at fault here because I feel there’s a bit of neglect on her part.

How about we see how Reddit handles this one, yeah?

The top comment states the obvious, which is that the brother is the a$$hole here, first and foremost, and he needs to take responsibility for his own actions. 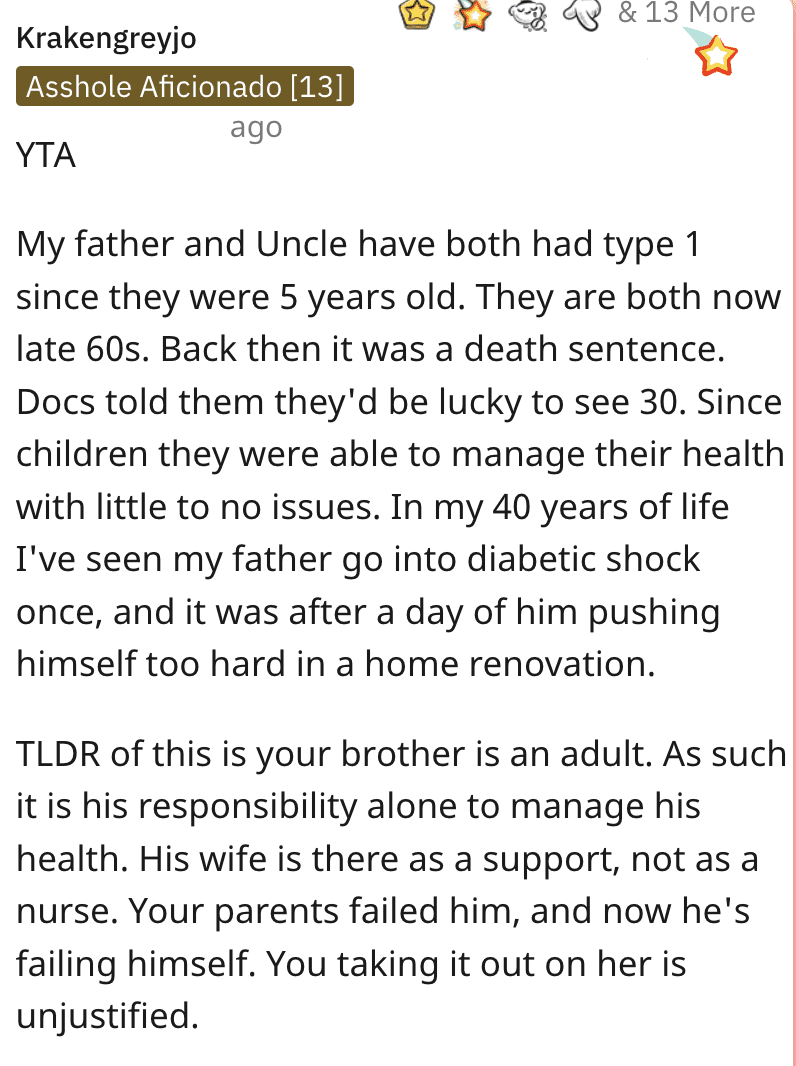 And then someone posted this killer analogy. 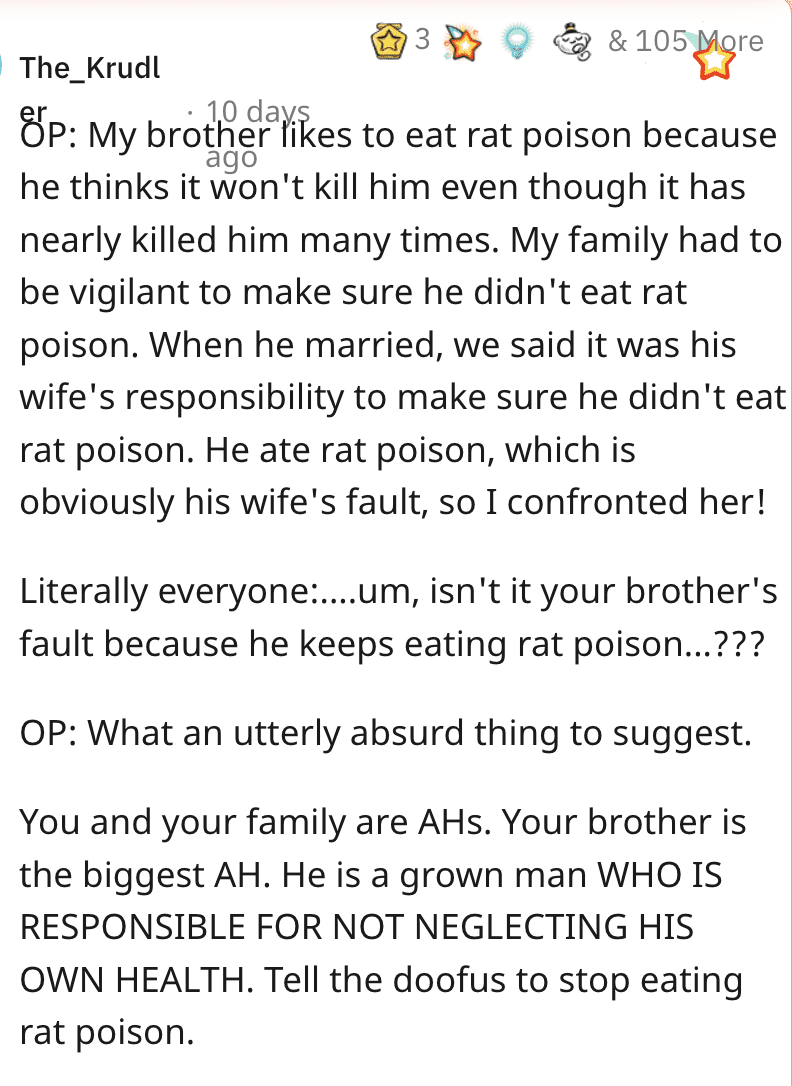 Enabler is definitely the word of the day. 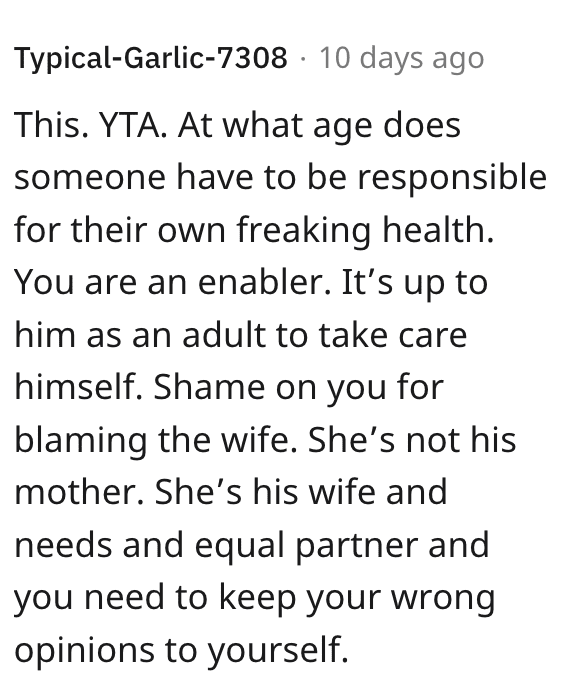 There is zero reason the brother cannot do it for himself. 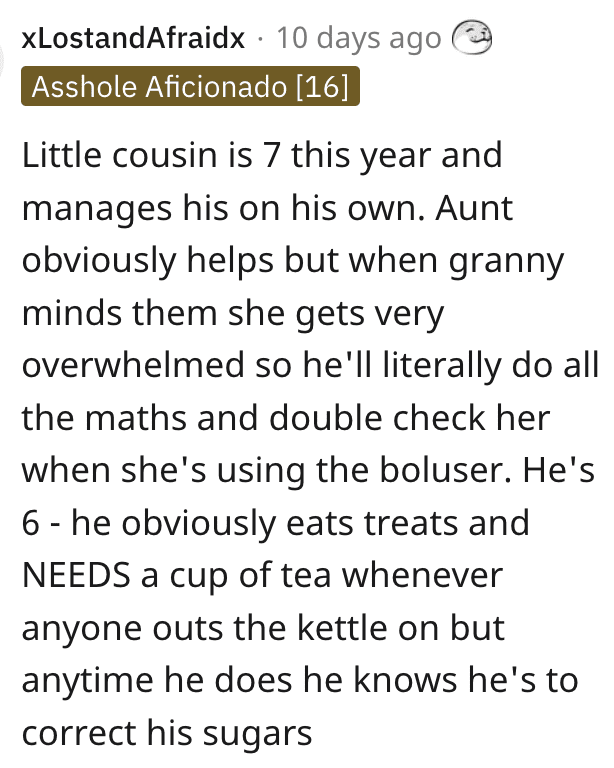 It’s all crap, if we’re being honest. 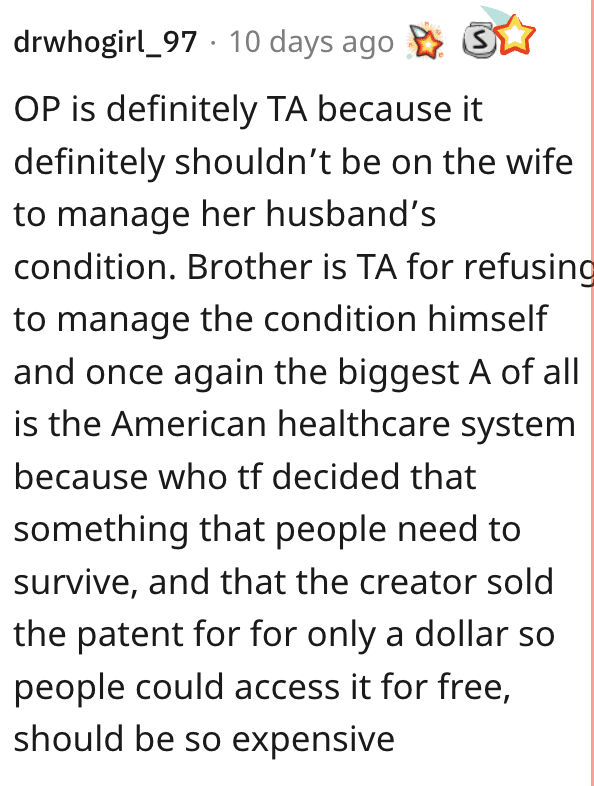 I mean sure, there are things that could be done better in America, but the truth of the matter is their parents set the brother up for failure. Instead of yelling at the wife, OP should be giving it to his brother straight.

How would you have handled this as the wife? I think I would have had some choice words!