Is It OK To Ask A Family Member To Give Up A Passion To Help Watch Your Kids?

As someone who has chosen to have kids, I suspected just reading this headline that a huge pile-on was about to occur…and I was right.

People who don’t have children generally assume (rightfully so) that people who do have children should be able to take care of them – but even though we acknowledge that “it takes a village,” it can be tough to find one these days.

This woman has four children and a husband struggling with depression. Her finances won’t allow for a regular sitter. She has no one to lean on other than her sister, who has in the past been ready and willing to help.

Okay just writing the title like that made me feel super guilty, but please hear me out before judging too harshly.

My sister (33F) is child free, but loves my kids and was happy to watch the older 2 or sometimes 3 to help me keep my sanity. This has been extremely helpful and I tell her all the time how grateful we are for her help.

Recently, she’s chosen to foster dogs that can’t be around children much or at all, so her ability to help her OP has been more limited – and OP is feeling the strain.

The thing is that the kids used to go over to her house, but right now they couldn’t because my sister was fostering an elderly chihuahua. My sister claims she couldn’t have them over for the time being because they would stress out the dog. Her dog was extremely frail and timid so I think this was a fair assessment.

This was the 4th dog she has fostered, all of which couldn’t be around my kids. This most recent dog took 8 months to find a home for, but most of her other dogs took even longer.

When she told me she found an adopter I knew I could finally breathe a sigh of relief and joked about how I was so glad she could babysit again.

When OP realized her sister’s most recent foster dog would soon be adopted she felt relieved…only to have that hope dashed when her sister said she would be taking in another high-needs dog immediately.

My sister proceeded to tell me that there was a second dog that desperately needed a new foster, so she planned to take in that one as soon as her current dog was gone. So, she couldn’t do anymore babysitting than she already is (sometimes she comes over to my house in the morning to help out).

I could literally feel my stress levels spike.

OP acknowledges that fostering animals is her sister’s passion, but still asked her to please skip another dog that would mean no babysitting time, because due to a host of reasons she feels as if her mental health is at a breaking point.

I haven’t ever done this before, but I opened up to her about how much I have been struggling since she got the dog. How little sleep I get each night, how my husband hasn’t been helping as much as he should, and some other deeply personal issues that I’ve been struggling with. Then I asked her, point blank, to not get another dog.

My husband is not a deadbeat dad. After our youngest was born he got severe depression. He isn’t out having fun while I’m working 24/7, he is miserable. I went to my sister instead of him for help because I don’t want to lose him.

He is in therapy and is on antidepressants. Anyone who has actually dealt with depression would know that that isn’t an instant cure all. Still my husband does the very best he can. I asked my sister because I needed more help than he can provide right now.

She comforted me, but ultimately didn’t agree on anything and said she needed some time to think.

Now she’s wondering whether or not it was wrong of her to even ask, even though she never demanded and says she realizes that her sister is not obligated to help her in any way.

I know I am asking a lot of her since rescuing dogs is her passion and that is why I feel so guilty. But I don’t have anyone else to help me. I can’t afford a babysitter long term, and my friends all have their own kids to look after.

Above all, my kids will always come before a dog and that’s the reason I was willing to request it. I’ve told a few different people about the situation and gotten a wide range of heavily biased opinions. So that’s why I decided to come on here and as you guys.

Was this unreasonable? I would never demand her to do this if she didn’t want to, but is it really so wrong to just be honest my situation and earnestly ask?

Reddit has some serious thoughts here, y’all, and if I’m being honest, most of them are not very kind and compassionate – though I do want to point out that OP didn’t bring up her husband’s struggle with depression until an edit, so many posters got hung up on him not helping her himself.

The top comment addresses the edit in her edit, and is a very empathetic response to OP’s issue – though she still believes it was wrong for her to assume her sister would put her nieces/nephews above her own passion. 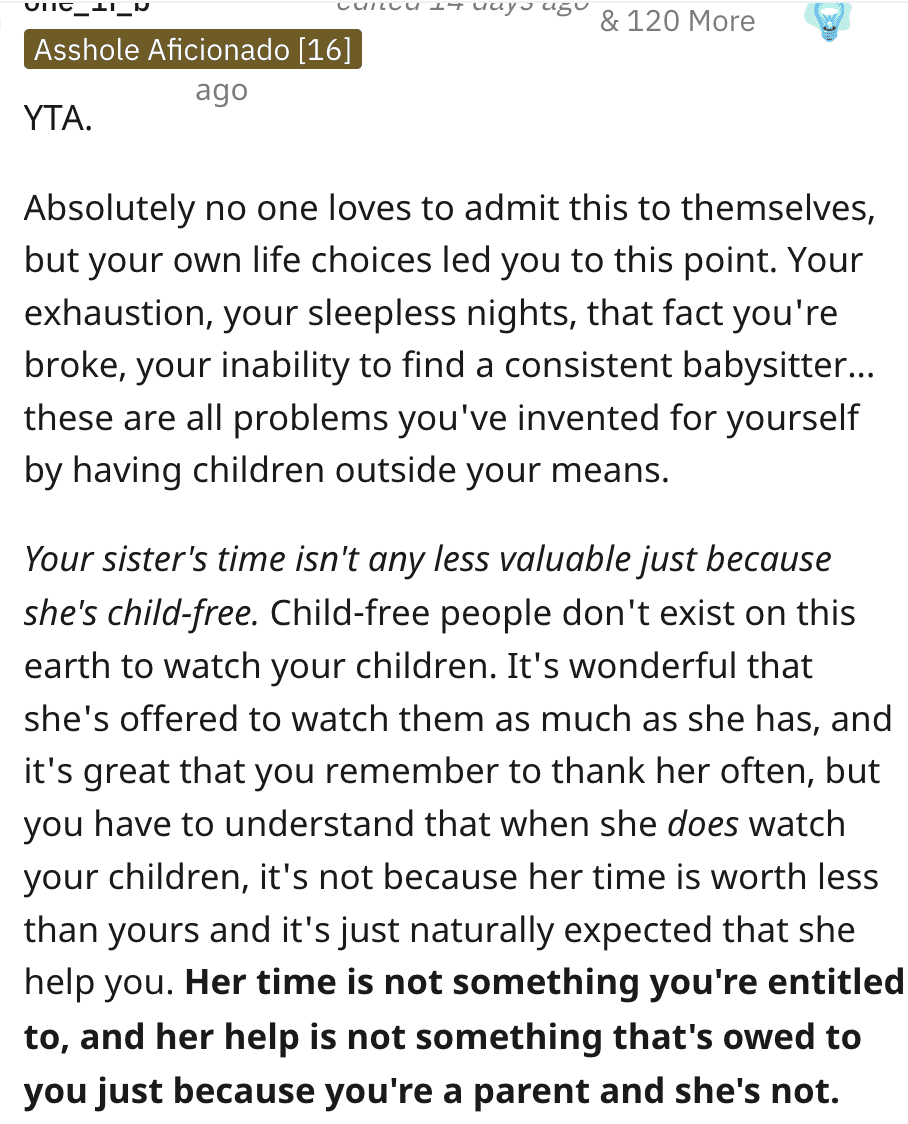 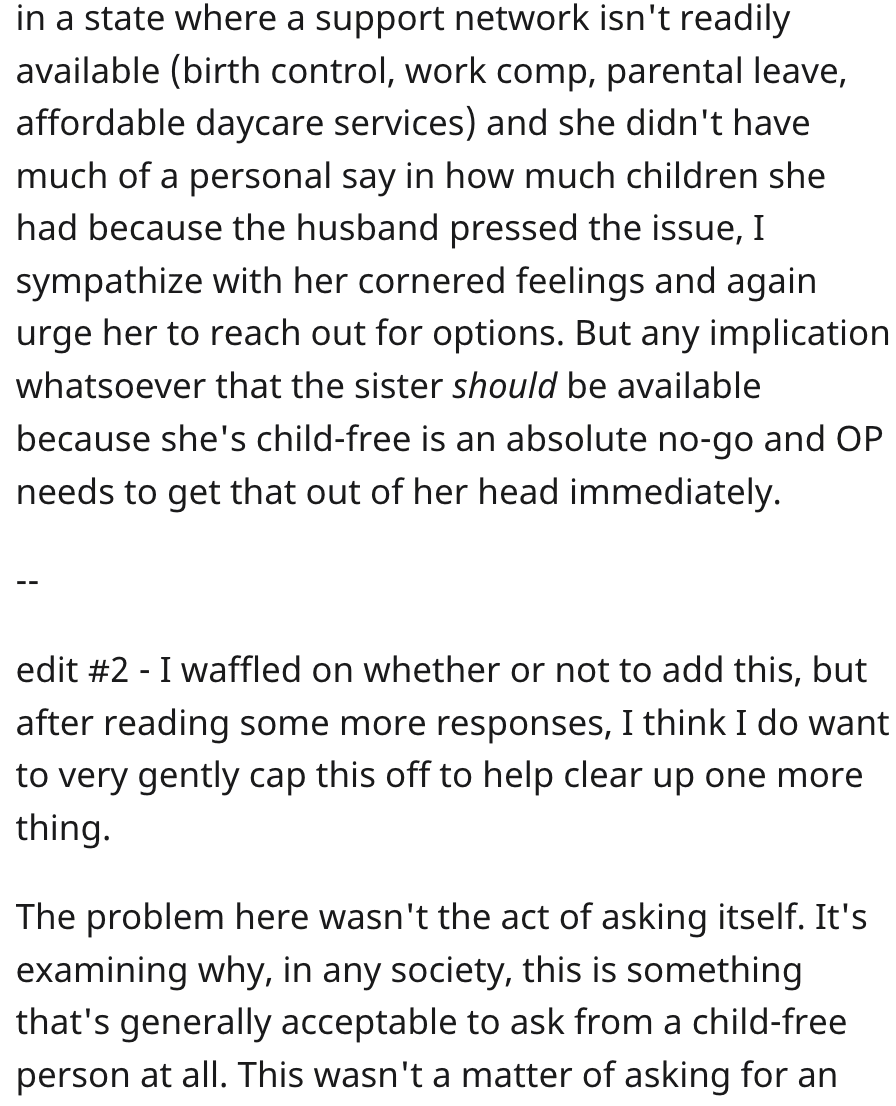 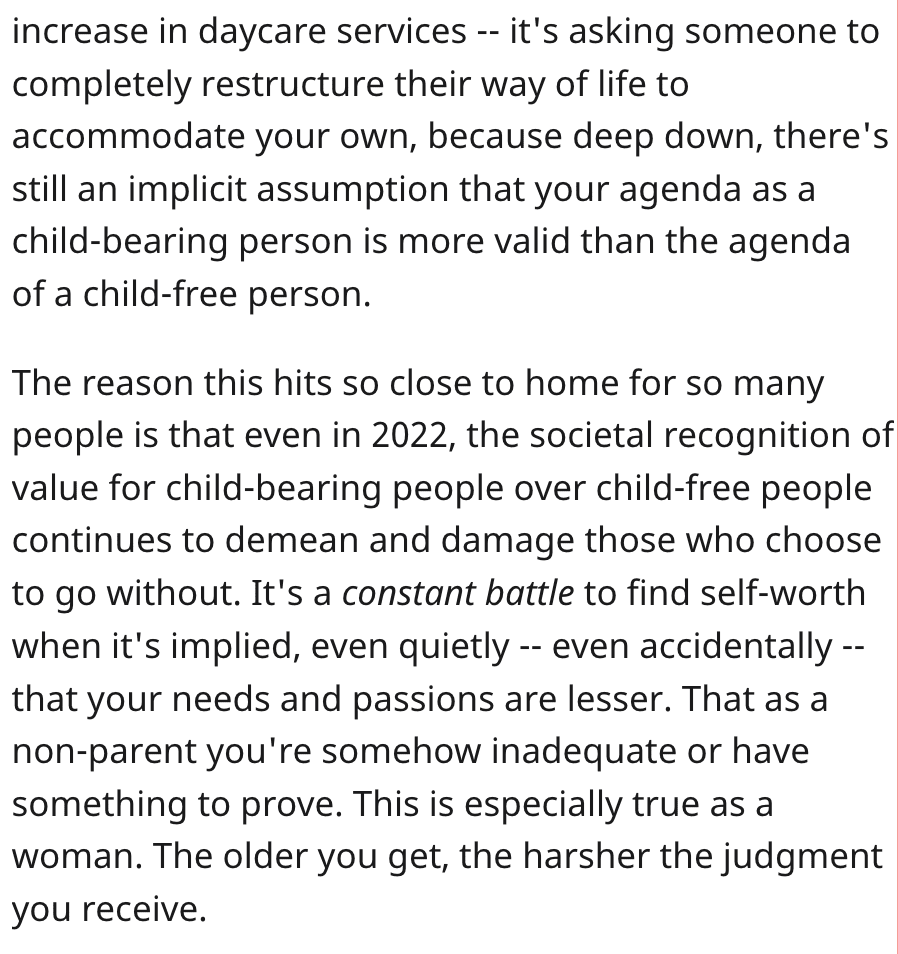 Many commenters wondered whether or not OP hadn’t realized a few children ago that she was in over her head? 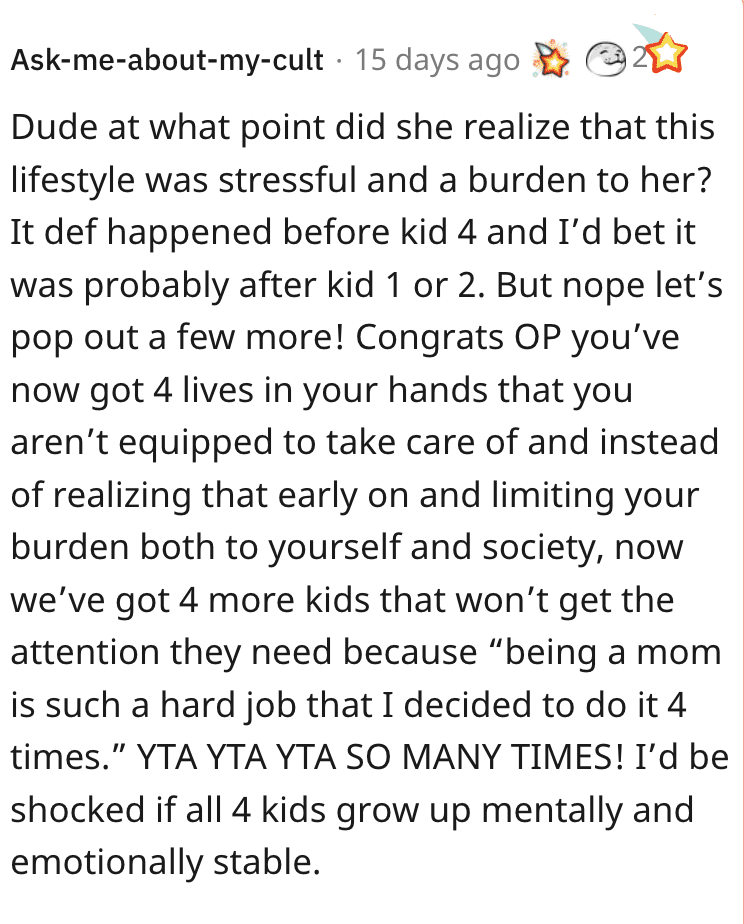 They’re also pretty sure that the sister knew exactly what she was doing the whole time. 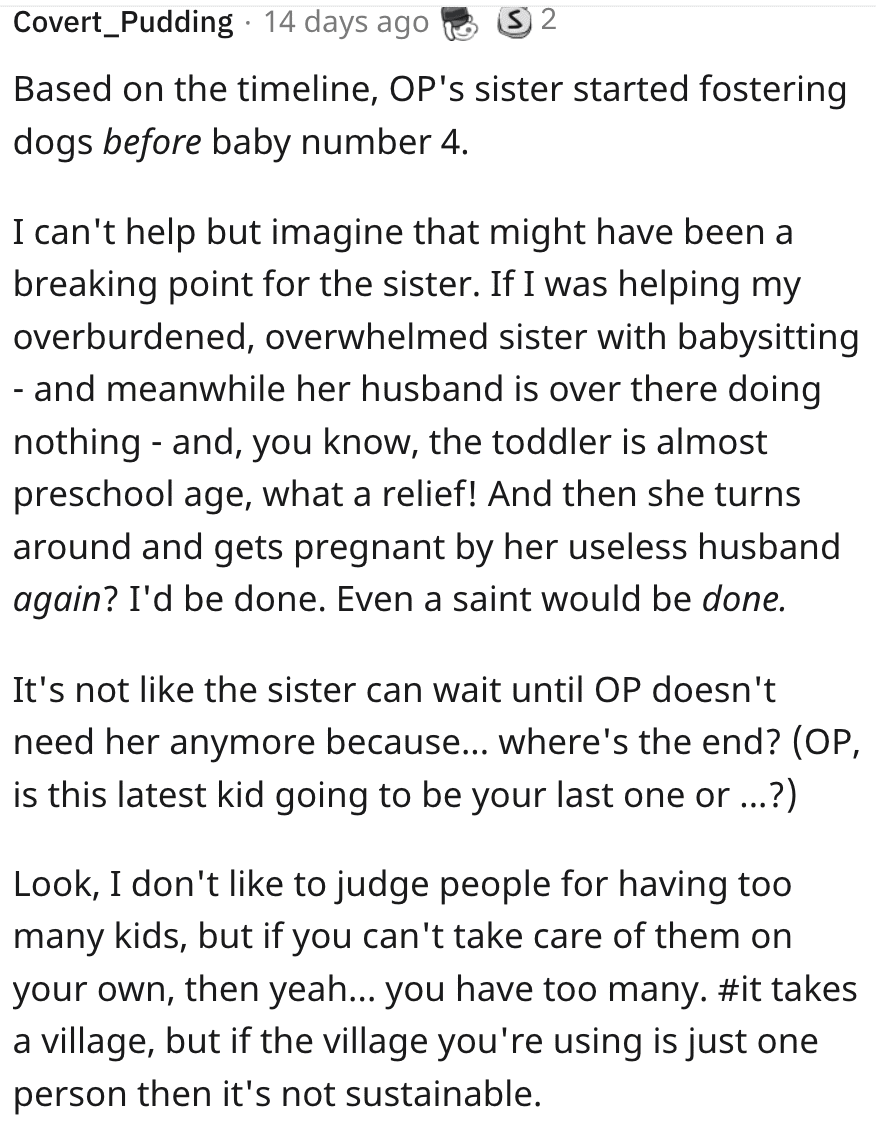 There just aren’t any winners in this situation. 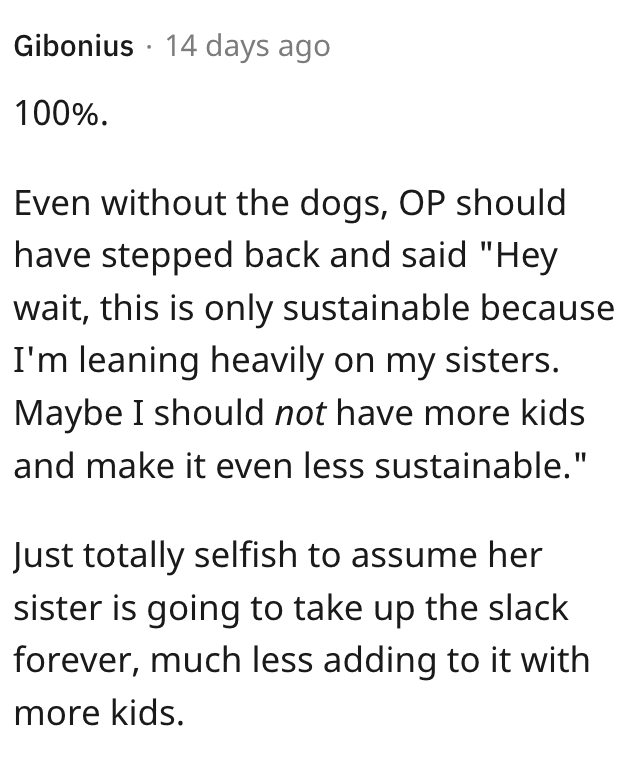 We all make our own choices in life, and we have to live with them. 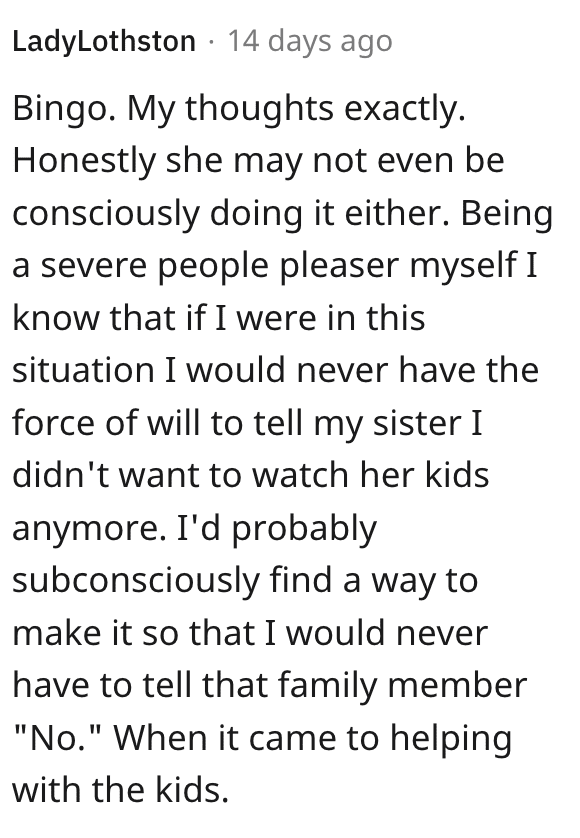 I agree that asking the sister to give up her passion was a step too far, but I definitely don’t lack empathy for OP’s situation, either.

Parents need more help, but with the way America especially is set up these days, it can be hard – if not impossible – to find it.

If OP was your sister/friend, what advice would you offer? Drop it in the comments!