Is It Ever OK To Exclude Close Family From A Wedding?

Weddings have a way of bringing out the worst in people. Days that are supposed to be about love and coming together too often turn into power struggles and competitions about who can serve the nicest catered meal.

This OP comes across as truly unhinged as she rants about excluding her partner’s twin brother due to his history of drug use.

I (30F) am supposed about to get married to my fiance (27M), but there’s a big problem concerning our wedding and that’s his twin brother. His brother is a drug addict and got in a lot of troubles in the past cause of it.

I obviously don’t want a drug addict invited at my wedding, but my fiance insists not only to invite him, but to make him his groomsman too.

Her fiancee says his brother is clean and sober and he wants him there.

In order to prove his point, he invited them for dinner only to have OP throw an absolute fit, insult his family to their faces, and then attempt to throw them out of her house.

He says that he went to rehab and he’s now “clean”, but I seriously doubt that, I know people like him, they never change.

We kept arguing about it for a couple of days, till yesterday when he invited his brother and his mom over to dinner to convince me to have a change of heart and let him attend the wedding.

I was furious that he would invite that drug addict and their nutcase of a mom to my house without consulting me first.

I told them that I’m not gonna make dinner for a dopehead and to please leave my house.

This upset the brother, who says he just wants to be there to support his brother on his big day.

Then the MIL got upset (obviously) and the evening devolved into a yelling match in which it sounds as if OP lobbed most of the insults.

His brother then started sobbing, saying that I’m unfair for not letting him support his brother on his big day just because of some stupid mistakes.

My future MIL started berating me about how heartless I am for doing this to their sons and being so hung up on something that’s in the past, but I told them to drop the act, these “stupid mistakes” literally landed him in jail and I’m not gonna allow a former offender at my wedding under any circumstances.

I also told my future MIL to stay in lane, as this is not her wedding and she’s also a big reason for why we’ve got into this situation, as she kept enabling his addiction for a long time. They started shouting at me, but I eventually managed to make them leave my house.

Her fiance is angry and sleeping on the couch but OP is nowhere near wanting to give in – if anything, she’s ready to double down.

My fiance was furious at me and told me he can’t believe how badly I treated his family, I told him that’s not my fault that his family is formed of a bunch of nutcases, which turned into another argument between us, with me saying that if I see his twin brother between the guests at the wedding, then I’m simply not gonna walk down the aisle.

My fiance slept on the couch that night and he’s still treating me coldly even today, but I’m still not willing to reconsider my decision, if anything, I’m now seriously considering to hire a security guard to keep that drug addict ( and possibly their crazy mom too ) away from my wedding.

AITA or I’m justified in my decision?

She wants to know if she’s in the wrong, because apparently this is a real post.

Reddit is stepping up for the fiancee below in a big way.

The top comment says they don’t think OP will have to worry, because after the way she’s behaved there likely won’t be any wedding anyway. 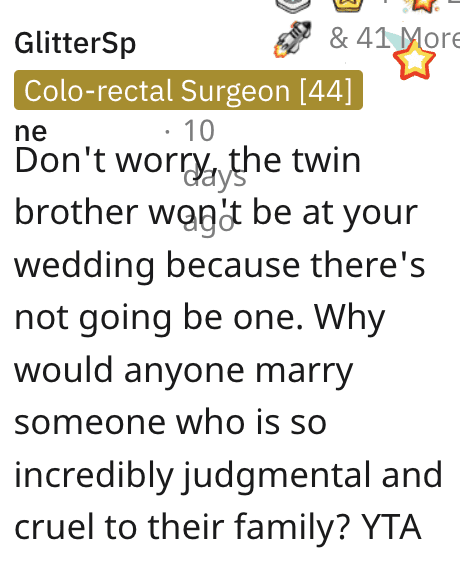 People make mistakes, and without the support of family, they’re destined to make them again. 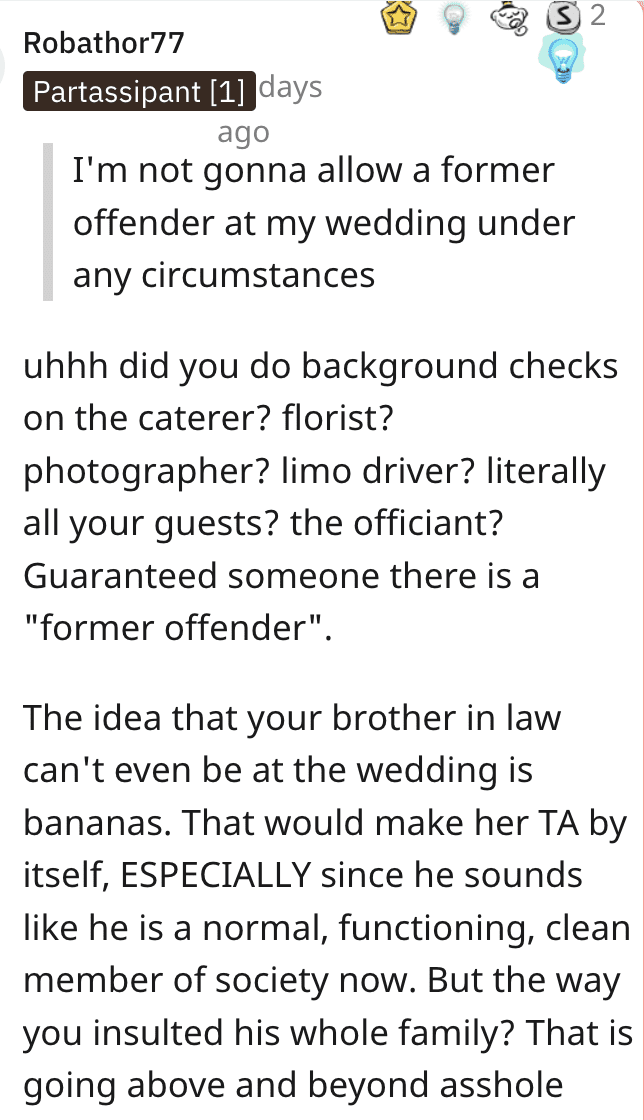 She’s so judgmental that maybe she did do background checks on everyone she hired. 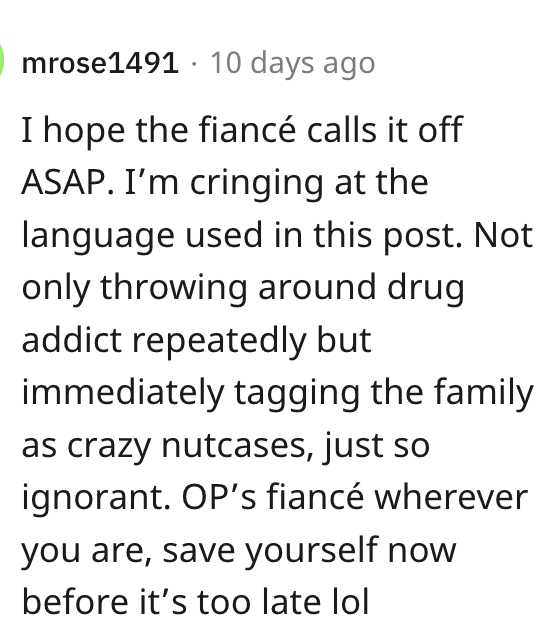 The general sense is that OP is the nutcase, not her fiancee’s family. 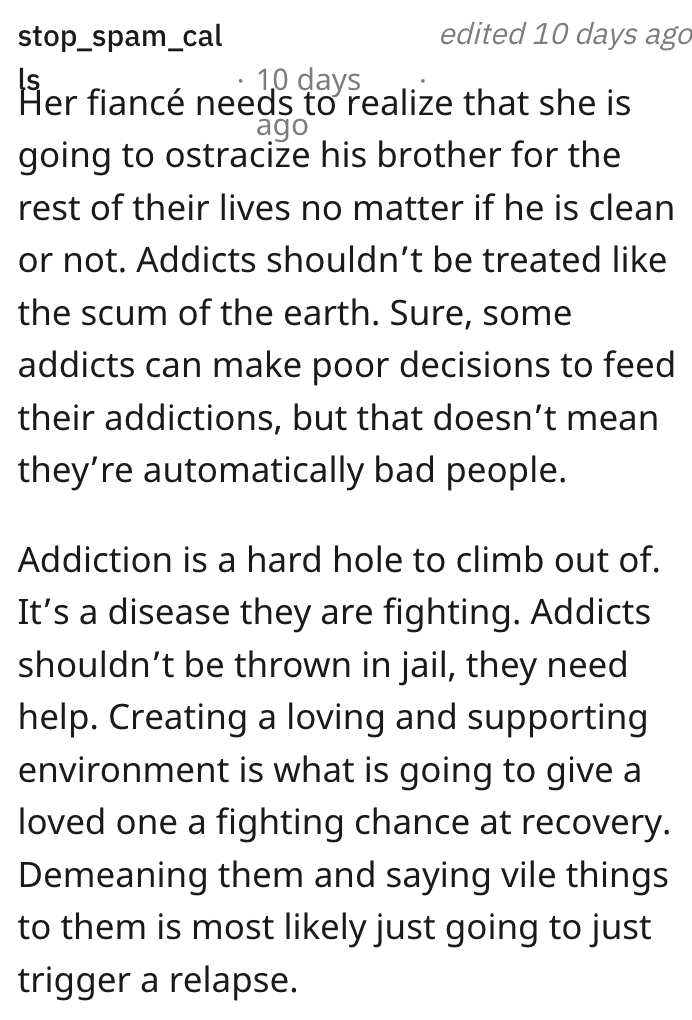 Everyone agrees the brother is the real victim here and hopes he comes out of this whole situation ok. 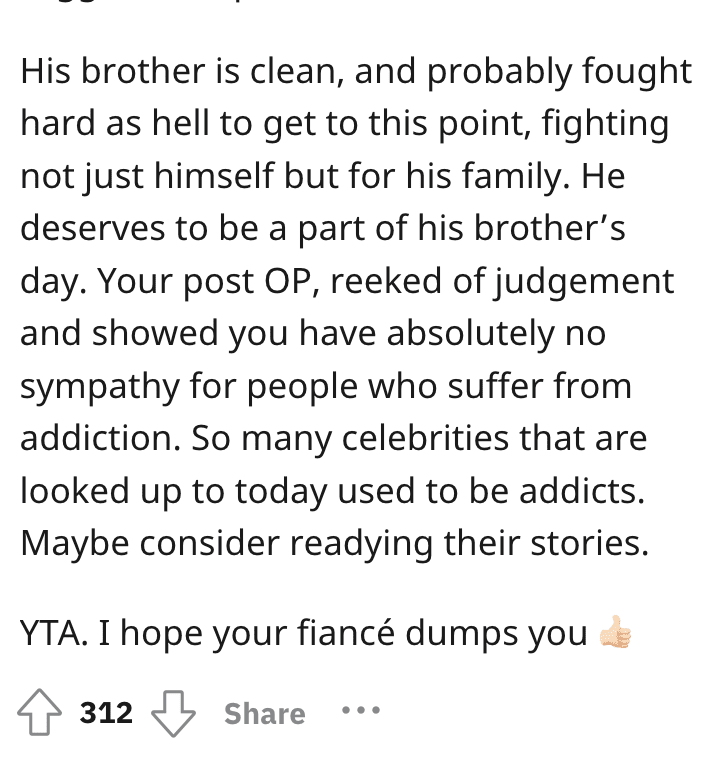 What would you say to someone like her if you met her in real life? Let’s do some cathartic ranting in the comments!