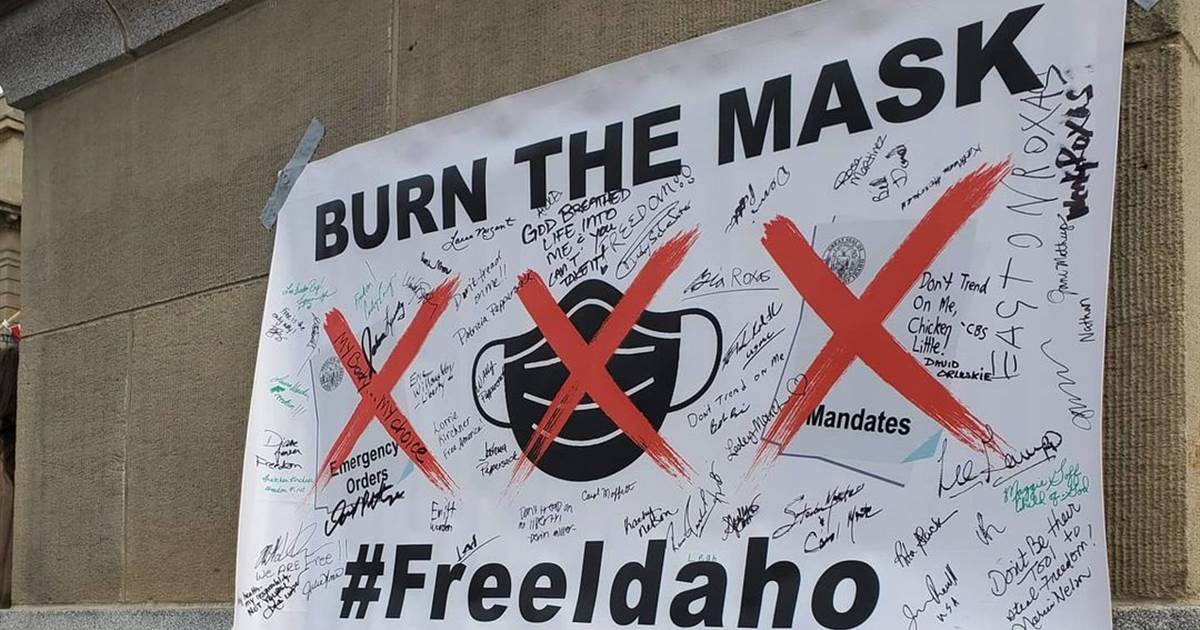 About 100 demonstrators burned masks outside Idaho’s Capitol in Boise on Saturday as a statement against pandemic restrictions, according to authorities and people who tweeted from the scene.

No one was arrested, and organizers had permits, but the rally was under review because a fire was started, Idaho State Police said in a statement.

“During the event, an open flame was ignited in a barrel,” police said. “Those involved with the event were informed both before and during the event that open flames are not allowed on State Capitol grounds.”

Video and photos showed children present and even participating.

A point person for the rally, conservative activist Darr Moon, the husband of Republican state Rep. Dorothy Moon, said it was one of multiple Burn the Mask rallies across the state Saturday organized by several groups. He posted photos on Facebook of a similar event in Rexburg.

Moon said because the state is mostly rural it has had low Covid-19 infection numbers, and masks and other pandemic restrictions aren’t always needed.

“Certain health districts are mandating or certain towns are mandating wearing masks and we just don’t have the numbers here,” he said. “The Covid numbers are very low. We’ve flattened the curve a long time ago and people want to go back to work, they want to have a normal life.”

According to the Johns Hopkins University Coronavirus Resource Center about 1 in 4 people who’ve tested for the virus in the past week in Idaho have turned up positive. That’s down from the state’s all time high the week of Dec. 6, when two-thirds of those tested were positive.

The state has recorded 1,876 pandemic deaths, according to NBC News’ tally.

The state “strongly recommends” masks, but they are not mandated, although some cities and counties require them. Both indoor and outdoor gatherings are limited to 50 or fewer people. Tables in bars and restaurants must be at least six feet apart, and all patrons have to stay seated.

On Tuesday Idaho’s House State Affairs Committee opened the way for debate on a bill that would prohibit mask mandates by government entities.

“We’re not against face masks,” Moon said. “You know, some people might need to protect themselves. There are certain portions of the population that are elderly … they have issues. For healthy-bodied people, we want to go back to work.

“Our livelihoods have been put in jeopardy because of all the executive orders and mandates.”