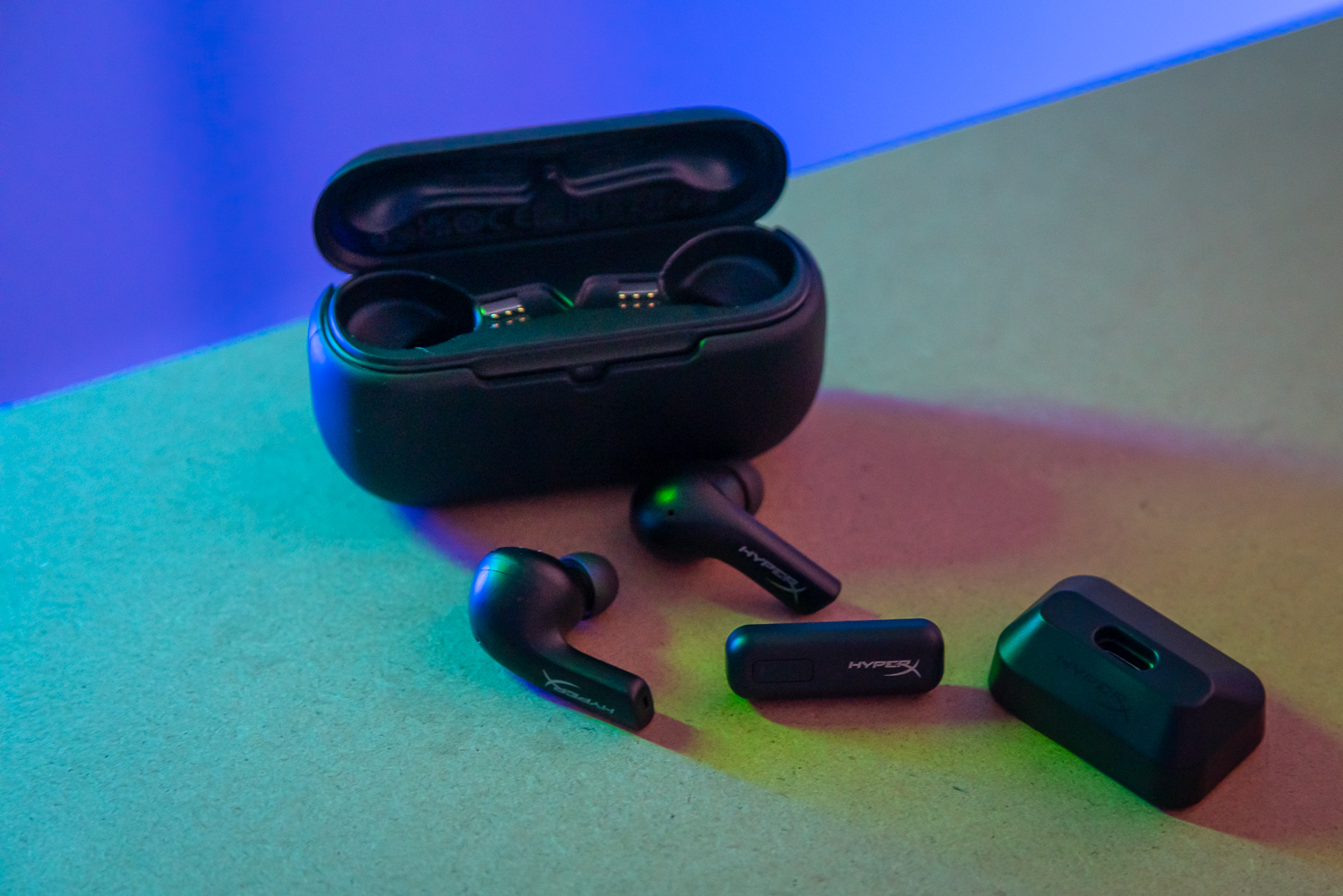 “HyperX Cloud Mix headphones are great for gamers with a ton of devices, but they’re a little more expensive than they should be.”

Excellent connectivity and battery life push the HyperX Cloud Mix Earbuds above previous attempts from Razer and Turtle Beach, bringing them closer to competing with the best true wireless earbuds. However, HyperX has yet to fully hit the mark. The Cloud Mix headphones cost $150 and lack some features like smart assistant support and active noise cancellation (ANC).

They look like headphones with the wires cut, similar to Apple’s AirPods, with elongated sticks that nestle in your ears to provide extra support. Unlike the AirPods, however, HyperX opts for a larger case that lays the earbuds flat inside. This makes the case much thinner than the cases you normally see.

In the box, you get the headphones, a charging case that extends battery life, a silicone cover for the case, and a low-profile USB-C adapter. This adapter is a big deal, allowing you to use the low latency connection on PC, Nintendo Switch, PS4, PS5 and even your phone. HyperX also includes adapter support, so you don’t need to pick up a USB-C port on your PC.

Pairing and switching between Bluetooth and 2.4 GHz is super easy.

These rigs all work with the 2.4 GHz connection, but they also work with Bluetooth 5.2, which is built into the Cloud Mix headphones. You can maintain a Bluetooth and 2.4 GHz connection at the same time, but you cannot use them simultaneously. I wish I had both available – for game audio from a console and Discord from a phone, for example – but pairing and switching between connections is extremely simple.

Switching is done via a button on the USB-C dongle, but the rest of the functions are done with touch controls on the side of the headphones. One press is for play/pause, two for skipping a track and three for rewinding. You can long-press to engage the microphone, and HyperX says you can remap the touch controls using its Ngenuity software (which I haven’t been able to test yet).

The touch controls aren’t great, though. There’s no volume control, which is essential, and I’m still struggling to find the exact spot that picks up touch inputs. It seems to jump every time I use the earbuds, sometimes triggering on top while other times only activating when I press in the middle. I constantly inadvertently activated the controls while adjusting the headphones and popping them out as well, which was frustrating.

While I’m not a fan of the touch controls, the broad platform support is what sets the Cloud Mix headphones apart. I’ve never had to worry about using the headphones on any particular platform, and I’ve swapped between the devices extensively due to their simplicity.

Despite best efforts, the Cloud Mix headphones still fall victim to the sound issues common with in-ear headphones. The lack of bass response is what stands out the most, with ball hits deep in Destiny 2 and devastating knockouts in Ring of Elden doesn’t sound like I’m used to. The bass is there, but it’s implied, not felt.

This is odd given that HyperX says the Cloud Mix Headphones have an extended frequency range down to 10Hz. Most headphones only go down to 20Hz. This sub-bass region is not however not represented. Even with explosive 808s in Kendrick Lamar Mr. Morale and Big Steps and scorching bass drum lines in Periphery’s blood eagle, I never felt the punchy low end that headphones like the Apple AirPods Pro offer.

Despite the lack of bass, the sound quality is not bad. There’s a little too much presence in the upper mid-range, which makes some in-game sound effects feel harsh too. There are still plenty of details, though. Bullets, footsteps and subtle sound effects all play well on the Cloud Mix headphones, with excellent stereo imaging.

I especially like using the Cloud Mix Headphones with Steam Deck and Nintendo Switch.

One area I couldn’t test was DTS:X surround sound. This is a major selling point for the Cloud Mix headphones, but HyperX didn’t have it ready in time for this review. I will update this review once the software is available.

Although I’m looking for a premium gaming headset like the SteelSeries Arctis Nova Pro for an immersive gaming experience, the Cloud Mix headphones hold up well. I especially enjoyed using them with the Steam Deck and the Nintendo Switch, where I could pop out an earphone without a big gaming headset hanging from my head.

One area where the Cloud Mix headphones really shine is the microphone. There’s not much noise cancellation, but the mics are still remarkably clear and detailed. You can easily communicate with your team using this mic, which is more than can be said for even some over-ear headphones.

The Mix headphones have excellent battery life, at least when it comes to true wireless headphones. HyperX claims 10 hours on the headphones alone, which you can extend up to 33 hours via Bluetooth with the charging case. It’s a little high in my experience, though. I spent a long afternoon playing on my Steam Deck via Bluetooth and the headphones needed charging after about eight hours.

It’s more than direct competition. The Razer Hammerhead is second highest at six and a half hours on earbuds alone, while the Turtle Beach Scout Air earbuds need a charge after just five hours. Eight hours is the same autonomy as the Jabra Elite 7 Pro, which is our top choice for true wireless earbuds at the moment. The Mix headphones don’t have ANC, admittedly, but the battery life is still excellent.

I tend not to opt for headphones in general because, frankly, they hurt my ears. I even returned the top rated Sony WF-1000XM4 because they irritated my ears. Not the Mix headphones, however. From sitting in front of my PC to lying on the couch testing out the Steam Deck, I’ve used the Mix headphones for hours without even minor discomfort.

They’re not too big, but the bulk at the top may irritate small ears. This is however the case with most true wireless headphones. The HyperX Cloud Alpha Wireless further improves comfort with three different tip sizes and a lightweight construction that isn’t too heavy.

HyperX’s Ngenuity software wasn’t ready for testing with the Mix headphones, so I’ll update this review once the app is available on iOS, Android, and Windows. You can read my HyperX Cloud Alpha Wireless review for an overview of this simple utility.

You’ll be able to adjust a 10-band EQ, remap touch controls, and enable DTS:X in the app once it’s available. There’s not much here to sway my final score other than DTS:X, which is a critical aspect of the Mix headphones that’s currently missing.

HyperX is entering a huge market with its first true wireless headphones. Although the game’s direct competitors are few and far between, companies like Apple, Sony and Bose have nibbled away at this market for years. HyperX scores with great battery life, great comfort, and usable sound quality, but some issues with software and touch controls prevent it from enticing gamers to switch to true wireless earbuds.

The most direct competitors to the HyperX Cloud Mix headphones are the Razer Hammerhead and Turtle Beach Scout Air headphones, both of which are cheaper. Outside of gaming, the Jabra Elite 7 Pros cost around $50 more, but they come with ANC, wireless charging, and dust and water protection.

You can use HyperX Cloud Mix headphones for years. Nothing prevents them from working with modern devices, so as long as Bluetooth and USB-C are supported, you can continue to use these headphones.

Yes. The focus on battery life, comfort and connectivity makes the HyperX Cloud Mix headphones more convenient than competitors like the Razer Hammerheads, even if the HyperX plug is more expensive. Still, the headphones lack ANC and smart assistant support, which makes the $150 price tag a bit hard to swallow.