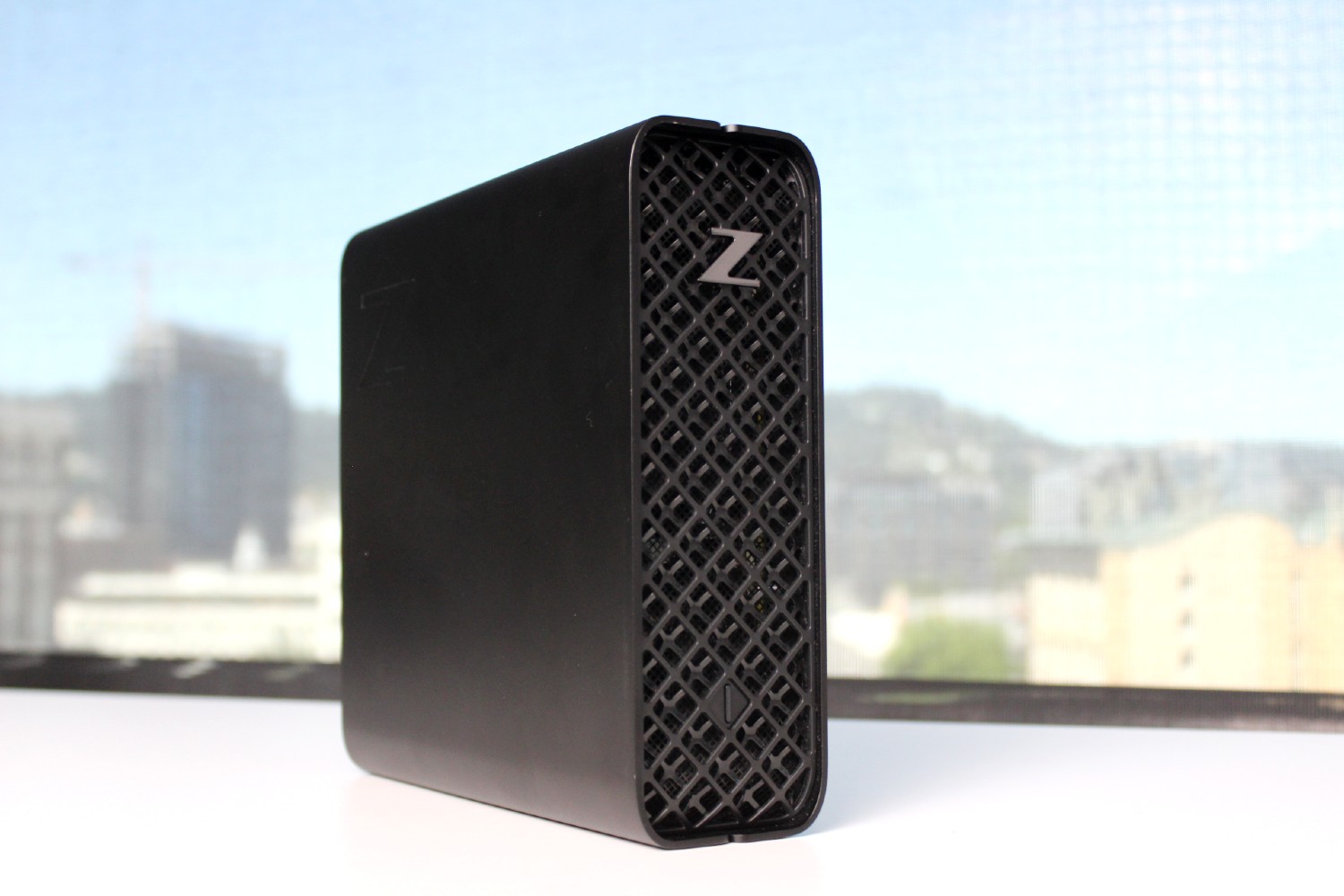 “The HP Z2 Mini G9 Workstation is both incredibly small and surprisingly powerful.”

A few years ago, it would have been hard to imagine a compact workstation like the HP Z2 Mini G9. It’s smaller than a shoebox, but contains complete desktop-class components in its black box.

It may not be something that can challenge the extreme efficiency of, say, a Mac Mini or a Mac Studio. Still, even with some odd design decisions and a hefty price tag, the HP Z2 Mini G9 is still a solid choice for a powerful yet compact PC.

The Z2 Mini G9 Workstation isn’t meant to be flashy, but it has more than just a little black box. The front has a mesh grille, which hides the Z logo and the power button. Sidenote: The Z logo can even be rotated when you place the Z2 Mini G9 on its side.

The size of the Z2 Mini G9 is important. It is close to an 8.3 x 8.6 inch cube and measures 2.7 inches thick. Interestingly, it’s about an inch wider and deeper than the Mac Studio. Apple’s desktop, however, is an inch thicker.

The idea here is that the Z2 Mini will adapt to many different scenarios – whether it’s sitting directly on your desk, attached to the back of your monitor, or even rack-mounted in a data center or server. I haven’t tried the last two use cases, but having the Z2 Mini G9 workstation on my desk for a few weeks certainly made for a clean setup.

One of the compromises to make this PC so small is to use an external power supply.

Of course, there are smaller PCs, even HP’s Z2 Mini G5, for example. Like the Mac Studio, the focus here is on powerful performance balanced with a surprisingly small footprint.

One of the compromises to make this PC so small is to use an external power supply. It’s quite heavy, much like what you might find on a high-powered laptop.

The build quality of the Z2 Mini G9 is quite sturdy. However, since the internals are user-accessible, this falls far short of the ruggedness of a unibody case. Two of my device’s panels weren’t perfectly aligned, allowing some to give way on the left side of the chassis. The rubber feet on the underside are pretty solid though, which should prevent any accidents.

The inside of the PC is incredibly easy to access. Simply use the latch on the back and the panel will pop open easily – no tools required. From there you have access to the internals, although you have to remove a few components to get to the good stuff. To reach the two DIMM slots for accessing the memory, you will need to remove the fan, which is quite simple. From there, you’ll be able to add up to 64GB of DDR5 memory – and up to 4800MHz. My device already came with this maximum, of course.

The system also has two M.2 slots for a total of 8TB, both configured for RAID data storage. You’ll have to remove the GPU to access the storage though – and yes, that means you can even swap it out too. So, even though it requires the removal of some components, this kind of user accessibility is simply not possible with desktop computers such as Mac Studio.

The HP Z2 Mini G9 has a ton of ports available, but I have to say: it’s a very odd selection. Most of your ports are on the back, where you’ll find three USB-A ports, two DisplayPorts, an Ethernet jack, a power jack — and get this — four mini-DisplayPorts. Yes, you heard me right – four mini-DisplayPorts. In 2022. Those are the ports included on the GPU, of course, so it’s not really HP’s fault.

They allow full DisplayPort 1.4. But that port has been on the way out for years now – and it’s to the point where it’s almost unheard of to be included in laptops or desktops. Yet here, HP has decided to include four of them. The worst part? These are, apparently, instead of including HDMI, which is still the most common way to connect to external displays.

The Z2 Mini G9 also doesn’t include a full-size SD card slot, which would have been a handy addition for creatives.

The only advantage is the “Flex IO” slot on the back, a modular port that can be HDMI, VGA or another specific connection you need.

Fortunately, HP includes some handy ports that are a bit closer, located on the left side. Here you’ll find two USB-C ports, an additional USB-A port, and a headphone jack.

The HP Z2 Mini G9 Workstation uses desktop components, which really sets it apart from other compact PCs. My review unit had a Core i9-12900K for its processor, a 14-core processor with eight performance cores and eight efficiency cores. These performance cores have a base frequency of 3.20 GHz and can supposedly boost up to 5.20 GHz using Turbo Boost Max. The inclusion of that 45-watt chip is impressive on its own, even if you don’t get quite the same performance as you would on a mid-size PC.

Sure, it has all the benefits of the current-gen Ampere architecture, but it’s purpose-built for professional workloads in small form factors. In other words, it’s a perfect match for the HP Z2 Mini G9 Workstation – as long as you keep your expectations in check. The Z2 Mini G9 isn’t meant to compete with larger PCs, which will either have extra thermal headroom or simply have much more powerful graphics cards. A taller tower like the Asus ProArt PD5 is a good example.

But we got impressive numbers in both single-core and multi-core tests, beating all but the most powerful gaming PCs we reviewed.

Speaking of graphics, the HP Z2 Mini G9 Workstation comes with a low-profile RTX A2000 graphics card from Nvidia. It’s definitely not your standard discrete GPU, and it’s the first of the line that I’ve tested myself. This particular model comes with 12GB of GDDR6 memory, which you would normally use to get an expensive RTX 3080 Ti. Of course, the memory bandwidth of the A2000 is significantly lower than the RTX 3080 Ti at just 288 GB/s. It’s even half the bandwidth of the RTX 3060 Ti and less than what you get in the mobile version of the RTX 3060.

It’s also only a 70 watt card, bringing it closer to what you get in a laptop GPU in terms of TDP. More importantly, it’s based on the same GPU (GA106) as the RTX 3050 Ti and RTX 3060. That should give you a vague idea of ​​what it’s capable of, but the extra VRAM really makes it an interesting (and unique) mix. ) of material. .

And as expected, the graphics are right between laptop performance with the RTX 3050 Ti and the RTX 3060. I tested the HP Z2 Mini G9 in 3DMark Time Spy, Fortniteand Assassin’s Creed Valhalla. In both games, the system averaged over 60 frames per second (fps) at maxed settings. As long as you stick to 1080p, you can definitely play alongside. Keep in mind, though, that something like a Dell XPS 17 RTX 3060 will beat it in most 3D games.

Now, at first glance, this may not look very impressive. This is by no means meant to be a dedicated gaming machine.

But for the right tasks, the HP Z2 Mini G9 Workstation really shines. Despite its small size, the Z2 Mini G9 is an excellent video and multimedia editing machine. Tested in Pugetbench Premiere Pro and Handbrake, this little machine offers surprising performance.

More powerful discrete GPUs will speed up exports and applying GPU effects, but the Z2 Mini G9 was extremely smooth in video playback. Not as fast as the M1 Ultra in the Mac Studio, it’s comparable to the performance of the M1 Max in the 16-inch MacBook Pro in terms of export times and GPU effects.

The Z2 Mini G9 can get both hot and noisy, though. All of the exhaust is in the back, so you don’t want the vents pointing at your hands or other sensitive materials. It’s nowhere near as loud as a big gaming PC with all its fans, but it’s not a Mac Mini (or even a Mac Studio) either.

What you get in exchange is really impressive internal cooling. The fear with a PC like this is extreme throttling, but thanks to the Z2 Mini G9’s beefy fan and phase-change CPU cooling, the system maintains high clocks and surprisingly low temperatures, even under heavy load. .

There are plenty of mini PCs out there that can do what the HP Z2 Mini G9 Workstation can do. The impressive performance alone makes it a unique offering, even if there are some frustrating aspects to its design.

The most obvious competitor is Apple’s Mac Studio. The M1 Ultra will likely give you better performance, although that higher-end configuration will cost you a lot more.

Another rival is Intel’s NUC 12 Extreme, which lets you pair its modular kit with any discrete GPU of your choice for even better performance.

The accessibility of this PC’s internals means it can last much longer than other mini computers. Not only can you upgrade in the future, but it’s a much easier PC to fix. It should easily last over five years, and could even be closer to ten depending on your needs.

Yes. As an alternative to Mac Studio, you won’t find other options as small or as powerful.