I’ve always loved the HP Spectre x360 lineup. With its gem-cut edges and beautiful 3:2 aspect ratio OLED screens, it has been the top of the top when it comes to Windows 2-in-1s. So, how can HP make that perfect device even better?

Its answer isn’t to throw out the old design but instead to make some subtle refinements to the formula. The new 13.5-inch model takes the place of the previous Spectre x360 14, though it’s only the marketing that’s changed. Both devices use a 13.5-inch screen and sport very similar dimensions.

However, I checked out the device at a hands-on event ahead of today’s official retail availability and was happy to see many of the changes coming to this year’s update.

If you’ve ever seen an HP Spectre x360 in person, then you know the design is striking. There’s the chamfered and angular gem-cut edges that shine bright with a jewelry-like glitz. For some people, though, that distinct look might have been a little too intense.

Based on that feedback, the design of the HP Spectre x360 16 released last summer toned back the look. The new Spectre x360 13.5 gets the same treatment.

Reminiscent of the soft corners and what Lenovo has on the Yoga lineup, this year’s HP Spectre x360 13.5 inch has more rounded edges around the lid and palm rests. HP tells me this is a design choice to make the Spectre more inclusive for everyone, and I agree with the choice.

The Spectre felt great to hold. When I pushed my hands against the edges to type, the device did not jam into my palms. This 2-in-1 made my hands feel quite relaxed, even when flipping it between the various modes of use.

Other than that subtle change, there’s nothing new in terms of design this year. You’ll still find it in Nightfall Black with Pale Brass accents or Nocturne Blue with Celestial Blue accents or Natural Silver colors.

The device is still plenty portable, too. It comes in at 11.73 inches x 8.68 inches x 0.67 inches and just under 3 pounds in weight. That’s right around the same thickness and weight as last year’s Spectre x360 14. It’s far from the most portable laptop of this type out there, but HP’s lineup has always prioritized quality materials and build quality over being the thinnest or lightest.

The materials HP is using, though, do matter for suitability. The keyboard keycaps are made with post-consumer recycled plastic. Additionally, the keyboard mechanism is made from agricultural waste, and you’ll find ocean-bound plastic in the bezel and speaker enclosures.

Ports and connectivity remain mostly similar to last year, though there have been some subtle changes to location.

Ports include two Thunderbolt 4 USB-C ports, a USB-A port, a headphone jack, and a microSD card reader. In an era when many laptops still use only USB-C, the inclusion of USB-A is appreciated as it means you don’t need to worry about dongles for USB drives. One could still be needed for connections to displays, as there’s no HDMI port here. Though the USB-C can be used for display connections, many older monitors are restricted to only HDMI.

The USB-A port is the drop-jaw style, meaning you’ll have to pull down part of the cover to access it.

A microSD card reader also remains from last year’s model for good measure, as you can use it to boost your storage.

HP is now using the same webcam that was found in the 16-inch Spectre x360 from the past summer. It comes in at 5 megapixels and supports Windows Hello. This is a huge change from the 720p or even 1080p webcams you’ll find on most laptops.

Those extra megapixels on the webcam are appreciated. I was testing the device in an overly lit studio, and the sensor is so good that when my colleague stepped in front of the device, it lit up her face and kept her bright and in focus without blowing out her face. That’s because the webcam supports temporal noise reduction.

HP tells me that support for Autoframe also keeps you in focus, and backlight adjustment can bring the right amount of lighting to your face.

This is found in include the HP GlamCam software, accessible from the F12 key on the keyboard in HP Command Center. 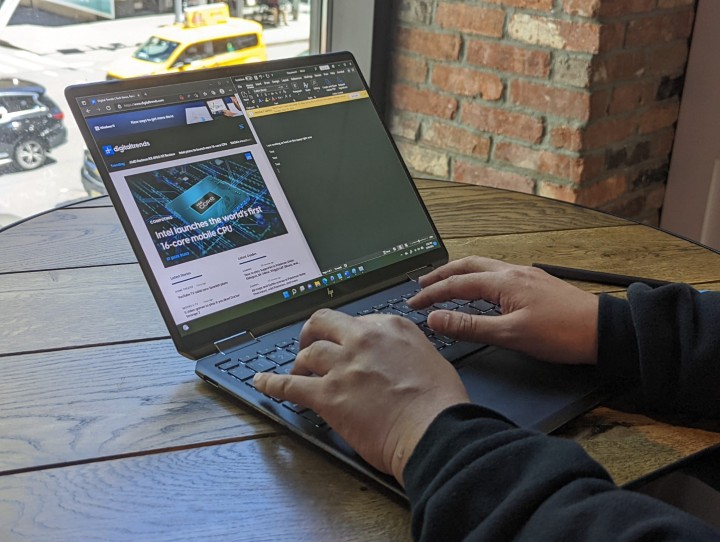 I was hands-on with a standard model of this year’s HP Spectre x360 13.5 inch, which had an LCD display with a resolution of 1920 x 1280. There’s not much changed in terms of the display, however, as HP is still offering panels in either 1920 x 1280 resolution or an OLED Panel that has 3000 x 2000 resolution. There’s even an HP Sure View Display option (a privacy screen) that peaks at 1,000 nits brightness.

Regardless of which one you choose, you’ll still find that the display has a 3:2 aspect ratio. This ratio allows a 6% more vertical viewing space than the 16:10 ratio you’ll find on HP’s other laptops. It also allows HP to fit more screens and less bezel, which is why this is replacing the 14-inch mode in naming and marketing. The 2-in-1 has a 90.11% screen-to-body ratio, per HP’s data.

We’ve previously mentioned the benefits of OLED screens, which are becoming more common on laptops now. It allows for more vibrant colors. With this particular display being LCD, I didn’t get any of that, but I did enjoy the 3:2 aspect ratio, which let me stack a web browser and Microsoft Word side by side and see more on the screen.

Again, though, this is not new between generations. The HP Spectre x360 14 from last year has this same panel.

Do note that the display also supports touch and the HP Rechargeable Pen. I switched the device into tablet mode and scribbled in Microsoft Paint. While I am not the best artist, the pen felt pretty accurate and recorded all my strokes with no lag. The pen also attaches to the side, just like in previous models.

Much like the display, the keyboard and trackpad did not change between device generations. I really enjoyed the switches on the keyboard. They felt very light on my fingers, but I still got some great feedback as I typed my way through a sample document in Microsoft Word.

The trackpad is also smack in the middle of the chassis and is quite accurate. I used multitouch gestures to scroll through webpages in Microsoft Edge and virtual desktops in Windows 11. It was fluent as I expected.

The HP Spectre x360 13.5 is powered by either the 12th generation Intel Core i7-1255U or Intel Core i5-1235U processors. These are both U-series chips, optimized for battery life as well as performance, but in a smaller CPU size for modern thin and light devices. These chips run at 15 watts, unlike the Intel P-series chips in laptops like the XPS 13 Plus, which run at 28 watts.

I wasn’t able to test the chips in my short time with the laptop, of course, but we’ll do a thorough round of testing once we get the unit in for review.

I think the biggest improvement here with the 12th generation U-series is with battery life. HP worked on several of these optimizations.

A Power Saver mode can extend the battery life when there is a concern about charging. In-bag detection also uses Intel’s Dynamic Tuning technology to adjust the CPU’s power to avoid overheating or battery drain when in a bag. Adaptive Battery Optimizer also can monitor battery temperature, charging status, and usage to preserve the battery. Finally, Smart Sense can optimize performance, temperate, and more based on applications being used.

HP is claiming 16 hours of battery life for mixed usage in Mobile Mark 18 testing, 19 hours and 30 minutes for video playback (brightness at 150 nites and full-screen FHD video), and up to 15 hours for wireless streaming (streaming in Netflix in Microsoft Edge with the screen at 150 nits brightness).

In buying the Spectre x360 13, you’ll also get extra software to play with. You can get to any of the software by clicking the F12 key on the keyboard for HP Command Center. The new Spectre devices come with HP Palette. This is a new proprietary digital workspace. It’s designed to help simplify your creative flow and allow you for cross-device collaboration. There are four parts that I really enjoyed.

HP showed me how PhotoMatch can let me match a face in a photo. In addition, with Concepts, they showed off how I could sketch and draw on a free-form canvas. The coolest parts, though, were HP QuickDrop and Duet.

An HP representative connected his Android phone to a separate HP Envy x360 Laptop (a working demo was not available on the specific Spectre I had) and showed me how he could drag and drop files between the two devices through QuickDrop. With Duet, meanwhile, he was able to stream and extend his PC’s screen over to his Android phone. I can see these as a great way to boost productivity, especially because it works with iOS devices, too.

It reminds me a lot of Dell Mobile Connect, as well as Microsoft’s Phone Link, and it is super cool to see this cross-device synergy where your PC plays nice with any device you already own.

Many of these applications aren’t new this year, but some have been updated with new features.

A larger Spectre x360 16 inch is also available. This beefier model packs options for Intel’s new Arc GPUs, but it is slightly more expensive, starting at $1,650.