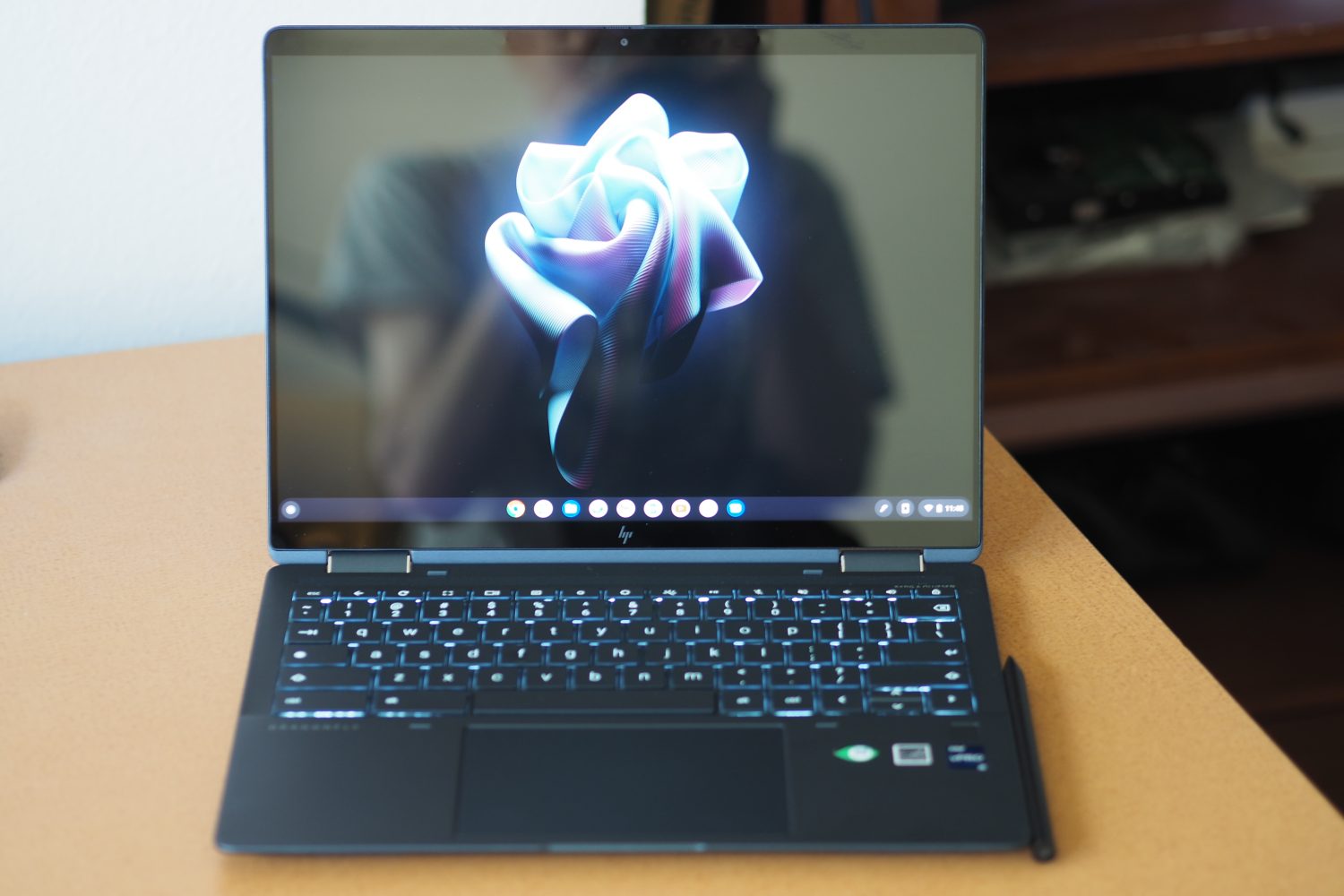 “The HP Elite Dragonfly Chromebook is the ultimate premium Chromebook, especially for business.”

Chromebooks continue to grow in excellence, but there’s never been a Chromebook that felt what I would call “cutting edge.”

And then, there’s the HP Elite Dragonfly Chromebook. There are several platform-first innovations tucked inside this little Chromebook, including a haptic touchpad, an Intel vPro processor, and a 5-megapixel webcam.

I reviewed a $1,734 configuration of the Elite Dragonfly Chromebook with a 12th-gen Intel Core i5-1245U with vPro and a 13.5-inch 3:2 WXUGA (2256 x 1504) IPS display. Like all Elite Dragonfly machines, the 2-in-1 was thin, light, and attractive, and thanks to the CPU, it was incredibly fast. There’s just never been a Chromebook this premium.

The Elite Dragonfly Chromebook is constructed of a magnesium-aluminum alloy contributing to its light weight of 2.8 pounds. As I’ve seen with such laptops, there’s some bending in the lid and flex in the keyboard deck. It’s not a knock against the laptop, given that the alloy itself is quite strong and the machine will hold up to some abuse. HP also subjected the laptop to MIL-STD 810H military test for robustness.

But it’s still a different rigidity than you’ll find in all-aluminum designs. The HP Elite C1030 Chromebook and Lenovo ThinkPad C13 Yoga Chromebook are two such laptops, and both feel more solid. The Elite Dragonfly Chromebook’s hinge is perfect, though, allowing the lid to be opened with one hand yet holding the display in place in clamshell, tent, media, and tablet modes.

In addition to being lightweight, the Elite Dragonfly Chromebook is thin at 0.65 inches. Its display bezels are thin along the sides but a little larger than other modern devices on the top and bottom.

It has an understated and elegant look.

Given the 13.5-inch 3:2 display, the 2-in-1 is nicely sized, about an inch less wide than thin-and-light 14-inch 2-in-1s but equally as deep as those with 16:10 displays. It’s within fractions of an inch of the Elite C1030 Chromebook, which also has a 13.5-inch 3:2 display. Overall, the Elite Dragonfly Chromebook is a very compact laptop given the display size.

The Elite Dragonfly Chromebook shares the same aesthetic as the rest of the Elite Dragonfly line. It’s a dark blue color that borders on black, and its lines are simple and minimalist. There are some chrome accents on the hinges and a chrome HP logo on the lid; otherwise, the laptop is unadorned. It’s an understated and elegant look that’s attractive without standing out. The Elite C1030 Chromebook is flashier, while the upcoming Lenovo ThinkPad C14 Chromebook Enterprise looks dull by comparison.

Connectivity is a real strength not only for such a thin and light laptop but also for a Chromebook. First, there are two USB-C ports with Thunderbolt 4 support, which is unusual for a Chrome OS laptop. That opens up a range of expansion options, including working with all of HP’s excellent Thunderbolt docks with up to three external displays.

My review unit was equipped with the Intel 12th-gen Core i5-1245U with vPro, a 15-watt CPU with 10 cores (two Performance and eight Efficient) and 12 threads. It’s Intel’s mid-range processor for thin-and-light laptops, with the P-series running at 28 watts and lower-power U-series versions running at 9 watts. Chrome OS is a very lightweight and efficient operating system, making the Core i5-1245U almost overkill for the platform. Combined with the 8GB of RAM in my review unit, the Elite Dragonfly Chromebook should fly — and you can configure the machine with an insane 32GB of RAM.

I can’t run our full suite of benchmarks on Chromebooks, but in the Android version of Geekbench 5, the Elite Dragonfly Chromebook achieved one of the highest scores we’ve seen on a Chrome OS laptop. It was slightly slower in multi-core mode than the Asus Chromebook Flip CX5 with an 11th-gen four-core/eight-thread Core i5-1135G7, but significantly faster in single-core mode. And in the Speedometer 2.0 web benchmark, the HP achieved the highest score we’ve recorded at 206, well ahead of the Chromebook Flip CX5.

Simply put, you’ll have to work hard to overwhelm the Elite Dragonfly Chromebook. I opened numerous Chrome tabs and ran several Android apps in the background and couldn’t get the laptop to slow down.

Out of the box, I was impressed with the 13.5-inch 3:2 WXUGA (2,256 x 1,504) IPS display. The background featured a cloth floral arrangement against a deep black backdrop, and I had to check the specs to ensure the panel was indeed IPS and not OLED. As I tested the laptop, I found the colors to be bright and dynamic, and the display was a pleasure to use.

I can’t apply my colorimeter to Chromebooks and can only provide my subjective experience. But the display was bright enough to use in my typical working environments, and black text popped on a white background. It’s an excellent display for productivity users and creators and one of the better displays I’ve seen on a Chromebook.

A 1000-nit HP SureView privacy screen option makes the display impossible to read from outside of a direct-on angle. It’s a great display for anyone who’s particularly worried about the privacy of their data.

Audio is provided by four speakers, two upward-firing above the keyboard and two downward-firing at the front bottom of the chassis. The setup put out plenty of sound that was just a tiny bit distorted at full volume, with clear mids and highs and a bit of bass. It was good enough for watching YouTube videos and the occasional Netflix show, but music lovers and bingers will want to pull out their favorite pair of headphones.

The keyboard has larger keycaps with tight spacing, and the switches are light and springy with a nice click when bottoming out. It’s a very precise and comfortable keyboard that’s as good as HP’s Spectre keyboards which are among the best Windows versions.

The 3:2 touchpad is a haptic version, and it’s excellent. It’s large with a very comfortable surface, and it responds immediately to taps and clicks. The feedback felt natural and was reliable during my testing. It was a great overall experience, with the entire touchpad surface responding equally to input. Not only does the haptic mechanism provide feedback for clicks, but it also lets you know when you’ve snapped a window to either side and when you move a desktop in multiple desktop mode. There are apparently more effects that I didn’t discover during my testing, but clearly, the platform is there to make great use of the haptic technology.

The display is touch-enabled, of course, and works as well as usual. It supports an active pen, which is included with some configurations and magnetically attaches to the right side of the chassis for storage and wireless charging. I found the pen to support Chrome OS inking with precision and reliability.

The webcam is a 5MP version, providing excellent resolution for high-quality video streaming. The Elite Dragonfly Chromebook is an outstanding laptop for hybrid workers who need videoconferencing to stay connected to colleagues. The webcam has a physical slider for privacy.

The Elite Dragonfly Chromebook is one of the few Chrome OS laptops with biometric login, in this case, a fingerprint reader located on the palm rest. It worked quickly and reliably in my testing and made the Chromebook much more convenient to use.

More important, though, are the security and management features afforded by Chrome OS Enterprise coupled with the Intel vPro CPU. Chrome OS is already a secure operating system, but the Enterprise version takes things to an entirely new level. Most importantly, a company’s IT department can approve and block apps and extensions, remotely disable and wipe machines, and protect an entire fleet with advanced security controls.

The Elite Dragonfly Chromebooks packs 50 watt-hours of battery capacity into its small frame, which isn’t a huge amount for a 13.5-inch laptop. Chrome OS is a very efficient operating system, though, while the Core i5-1245U is a lower-watt part in Intel’s 12th-gen lineup. It’s going up against some ARM CPUs in our comparison group, though, so I wasn’t entirely sure what kind of battery life to expect.

What I saw was slightly disappointing battery life. The Elite Dragonfly Chromebook managed just eight hours in our web browsing test that cycles through a handful of complex and popular websites. That might not sound all that bad, and it’s not. But in the context of other Chromebooks, which tend to excel in battery life, it’s definitely below average. In our video test that loops a local 1080p movie trailer, the Elite Dragonfly Chromebook hit 9.25 hours. Again, that’s below average, even if Chrome OS laptops typically don’t do as well in this test.

Overall, I’d rate battery life as less than stellar. Depending on your workflow, you may or may not get a full day’s work on a single charge. If this laptop has a weakness, longevity is it.

There’s no other Chrome OS laptop quite like the Elite Dragonfly Chromebook. Its haptic touchpad is better than most touchpads on any platform, coming in a close second to Apple’s Force Touch touchpads. Its vPro CPU enables extensive security and management for large organizations. And when fully configured, it’s the fastest Chromebook you can buy.

No, this isn’t a Chromebook that many consumers are likely to buy, mainly because of the high price. But any business looking for a secure, manageable, high-performing, and innovative Chromebook now has just one logical choice.

Right now, there really aren’t any legitimate alternatives. HP has jumped far ahead of the curve with the Elite Dragonfly Chromebook, with Intel 12th-gen CPUs with vPro that no other Chrome OS laptop can match.

The Lenovo ThinkPad C14 Chromebook Enterprise is a clamshell laptop with 12th-Gen Intel processors with vPro, but it’s listed as “coming soon.” Once it arrives, it still won’t have a haptic touchpad or 2-in-1 form factor.

If you don’t need the Chrome OS Enterprise features of the Elite Dragonfly Chromebook, then there are many less expensive machines to consider. However, none of them will have the wealth of features that the HP enjoys.

The Elite Dragonfly Chromebook is built well enough to last through years of abuse, and it’s equipped to power Chrome OS for years to come. The one-year warranty is particularly disappointing for such an expensive laptop, though.

Yes, if you’re a business that’s looking for the most advanced, secure, and manageable Chromebook available today. Consumer Chromebook buyers should look elsewhere.

What is Apple Music? music, pricing, and features explained

How to Overclock RAM | Digital Trends