How to Watch Blue Origin’s Next Rocket Test on Wednesday 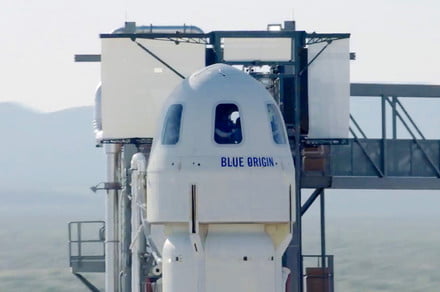 A crew will climb aboard Blue Origin’s New Shepard rocket shortly before its next flight test on Wednesday, April 14 … and then climb back out again before launch.

Blue Origin, the commercial space company founded by Amazon billionaire Jeff Bezos, will use the 15th test of its sub-orbital rocket to run through what it describes as “astronaut operational exercises” ahead of the launch of space tourism services in the next year or two.

“The primary operations will entail Blue Origin personnel standing in as astronauts entering into the capsule prior to launch,” the company said in a message on its website. “These astronauts will climb the launch tower, get into their seats, buckle their harnesses, and conduct a communications check from their seat with CAPCOM, the Capsule Communicator.”

The tower operations team will prepare the capsule cabin for launch and then briefly close the capsule hatch. The crew will then depart the capsule prior to the rocket engine firing up.

After the capsule lands in the desert close to the West Texas launch site, the crew will re-enter the capsule to rehearse the procedures for hatch opening and exit for upcoming full-fledged missions.

Live coverage of the mission — including all of the astronaut rehearsal activities — will begin one hour prior to liftoff. You can watch the broadcast by hitting the play button on the video player that will appear at the top of this page, or by visiting Blue Origin’s website. Also, be sure to check Blue Origin’s Twitter account on the day for any updates regarding the mission.

Besides the rehearsals, the coverage will also include the rocket launch, the separation of the crew capsule from the booster, the booster landing, and finally the capsule landing.

Blue Origin is among several commercial space companies looking to launch space tourism services. Its own tourism flight would take paying passengers to the edge of space around 62 miles up, offering stunning views of Earth and space, as well as a brief spell of weightlessness, before returning to terra firma. Virgin Galactic is also planning sub-orbital flights, and recently unveiled a dazzling new space vehicle that it will use for such rides.

SpaceX, meanwhile, is planning more complex, orbital experiences, with its first one planned for later this year. It’s also working with space company Axiom on a mission to send private citizens to the International Space Station in 2022, and could even send passengers on a fly-by of the moon in the coming years.