How to resume ‘normal’ life when you’re vaccinated and your kid is not? Carefully, experts say 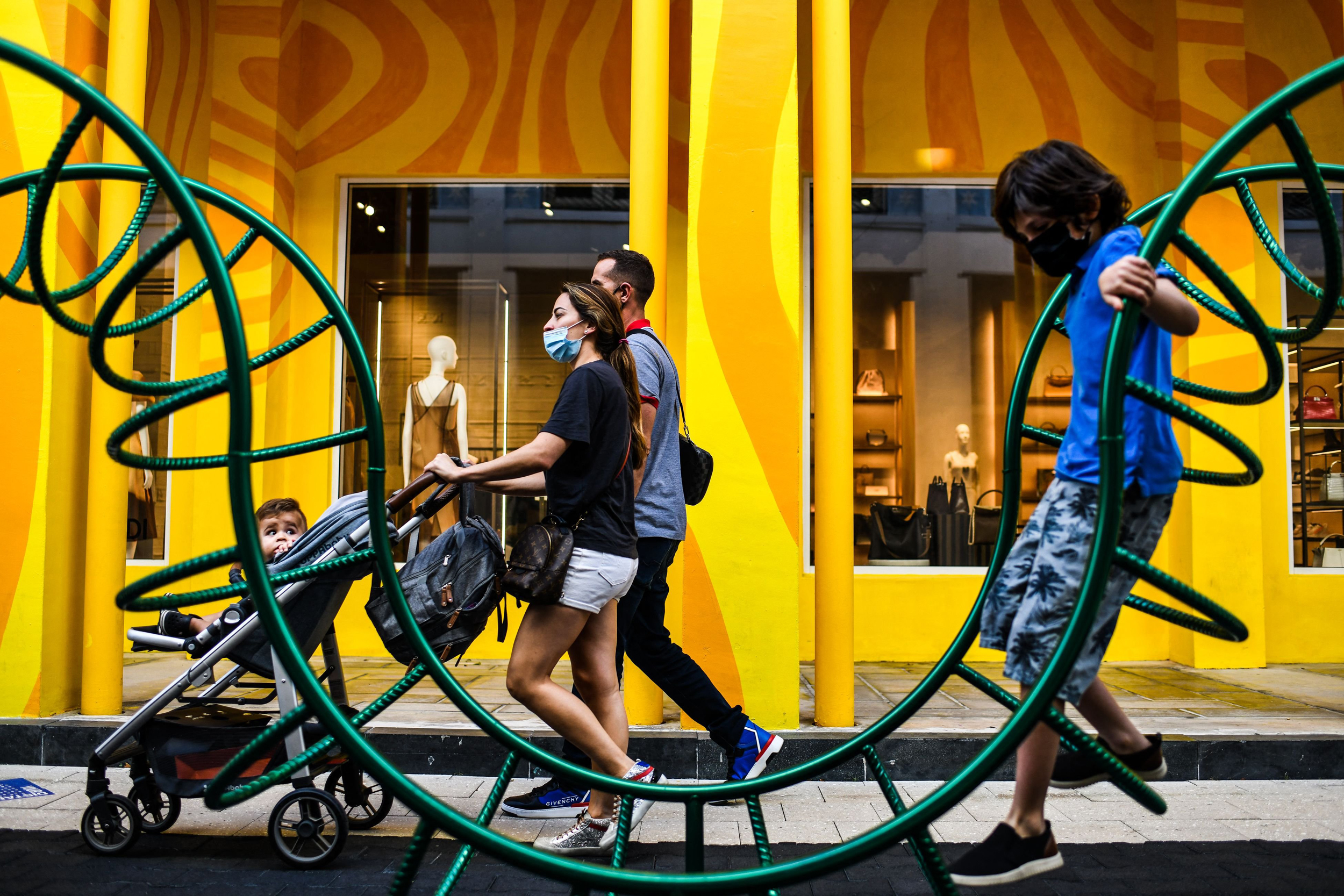 Millions of Americans are getting vaccinated against Covid-19 every day, millions are trickling back to work or taking long-delayed vacations, millions more are returning to old routines.

But the question that has bedeviled parents since the start of the pandemic remains the same — what do we do with the kids?

Especially now, when most teens and children are still months away from being vaccinated.

The answer, public health and parenting experts said, is to continue to be careful even while wading deeper back into “normal life.”

“No. 1, you listen to the science and you follow the science,” said Michele Borba, an educational psychologist and “TODAY” contributor. “The top concern I hear from parents these days is how can we live and still keep their kids safe. So I tell them, anytime you go on a trip, you take the safe route. Anytime, you go to a store, you make sure it’s not crowded. You want to go see grandma? Make sure she’s vaccinated first.”

It’s not just the parents who are worried, added Borba, the author of “Thrivers: The Surprising Reasons Why Some Kids Struggle and Others Shine.”

“Increasingly, I’m hearing the kids are worried,” she said. “They’re soaking in their parents’ anxiety. Some kids are convinced we’re all going to die.”

Sue Groner, the author of “Parenting With Sanity & Joy: 101 Simple Strategies,” agreed that now is not the time for vaccinated parents to let down their guard.

Teenagers and children are more likely than adults to get milder infections and their death rate is far lower than that of grown-ups, according to the Centers for Disease Control and Prevention. They are still, however, capable of spreading the virus to others, the agency warned.

With vaccine distribution now beating expectations after a slow initial rollout, the Biden administration gave the green light April 19 to make all Americans 16 and older eligible for a Covid-19 shot. But so far, no date has been set to vaccinate those younger than 16.

And that’s made some parents think twice about sending their children back to classrooms.

“If a safe, effective vaccine were available for children, we would likely vaccinate and have the kids return to school,” said Ahnalee Brincks, 47, of East Lansing, Michigan, who along with her husband has got their first shots.

An assistant professor at Michigan State University and a biostatistician whose specialty is rooted in epidemiology, Brincks said the schools her children — ages 11 and 7 — attend simply don’t have enough space for adequate social distancing and the Covid-19 testing program is inadequate.

So until her kids get vaccinated, she said, it’s virtual learning even though “having two kids at home learning has a huge negative impact on our work.”

“On the positive side, our younger child’s teacher is outstanding and online education for her has been excellent,” she said.

A Michigan man, who lives in a very conservative part of the state and asked not to be identified, told NBC News he’s keeping his kids home because too many people in his area aren’t taking Covid-19 as seriously as they should. He said he’s already got his first shot of the Moderna vaccination.

“My opinion about not sending the kids back to school is grounded in the belief that there are too many nonbelievers in this area,” he said via Twitter. “Online schooling is available and acceptable. Just refuse to expose the family until all the science is ‘really’ in and conclusive.”

Michigan currently has the fourth highest Covid-19 infection rate in the country, according to Becker’s Hospital Review. Public health experts said the biggest increases have been reported in the conservative counties north of Detroit, an area known as The Thumb, a bastion of Trump voters, that has been especially resistant to pandemic restrictions and mask mandates.

But parents across the country are facing the same dilemma, Angela Hall, one of Brincks’ colleagues at MSU, said.

“We see a reluctance of many workers, particularly parents, not wanting to return to the office,” said Hall, an associate professor at MSU’s School of Human Resources and Labor Relations. “Concerns parents have voiced have centered around unvaccinated children but also around the experience that students may receive in a socially distanced classroom, or as in-class students, when teachers may be devoting supposedly more attention to students who are simultaneously learning remotely in hybrid classroom environments.”

The burden on parents doesn’t fall equally, either.

“As women typically shoulder more of the child care and rearing demands, we have seen a segment of women who do not wish to return because of the well-being of their children,” Hall said. “However, there are also parents — both moms and dads — who have been anxiously waiting for their kids to return to the classroom because they feel like they learn better in person or because the parents feel that they need a break from 24/7 child care.”

Summer Johnson McGee, dean of the University of New Haven’s School of Health Sciences, echoed that.

“Absent pediatric Covid-19 vaccination approval by the FDA, the decision to send children back to school unvaccinated presents some serious trade-offs for parents,” she said. “The educational, social, and psychological benefits of returning to in-person school for children have to be weighed against the potential health risks, particularly for higher risk children with asthma or other chronic conditions.”

And if school districts “cannot provide physical distancing or surveillance testing, parents have to consider carefully the risks and benefits of students returning to school without basic public health protections in place,” McGee said. “No parent should have to risk their child’s health for their education, but without vaccination this fall, it may come to that.”

Many parents are also keeping at home children who aren’t old enough to go to school, but it has less to do with vaccinations and more to do with the fact that the U.S. child care industry collapsed during the pandemic.

Parents who lost jobs could no longer afford to send children to preschools, forcing administrators to lay off thousands of staffers, the National Association for the Education of Young Children reported.

More than 80 percent of the 6,000 child care providers surveyed reported a loss in enrollment. And an industry that employed more than 1 million people in December 2019 had 166,900 fewer workers a year later, according to the federal Bureau of Labor Statistics.

“Preschool enrollment is still way down, but I have not heard fear of transmission being a reason,” said Rhian Evans Allvin, CEO of the National Association for the Education of Young Children. She noted that a Yale study of child care programs that remained open last summer showed little spread of the virus to providers who wore masks, washed hands and encouraged social distancing when possible.

“Most of the stories I’ve heard about parents deciding not to return children to preschools have been economic in nature,” she said.

The Biden administration has already set aside billions of dollars from its $1.9 trillion Covid-19 relief package to help child care providers pay the rent, rehire staffers, and keep the costs low for already-strapped parents.

“The strength of our country, the resilience of our economy depends on affordability and the availability of child care,” Vice President Kamala Harris said earlier this month at the White House.

But that lack of options is being felt in the economy.

The Labor Department noted in its March jobs report that the percentage of people who “teleworked or worked from home” ticked down just slightly to 21 percent from 22.7 percent in February.

Meanwhile, Americans are itching to fly — and take the kids along — after a year of being grounded by the pandemic, Mark Crossey, of the Skyscanner travel site, said.

“The next big ‘travel moment’ in the U.S, is, of course, Memorial Day and we expect this to be a real measure of the confidence gained over the last few months,” he said. “Our data shows that four of the top 10 booked destinations by American travelers for Memorial Day are being booked by families.”

But right now, the CDC recommends that people delay any domestic or international travel until they are fully vaccinated.

Borba did not weigh in specifically about air travel, but said “every outing is also a chance to reinforce your safety standards.”

“You know how you dip your toe into the pool to make sure the water’s good and you check to see where the deep end is before you let your kid jump in?” Borba said. “Same thing with Covid.”