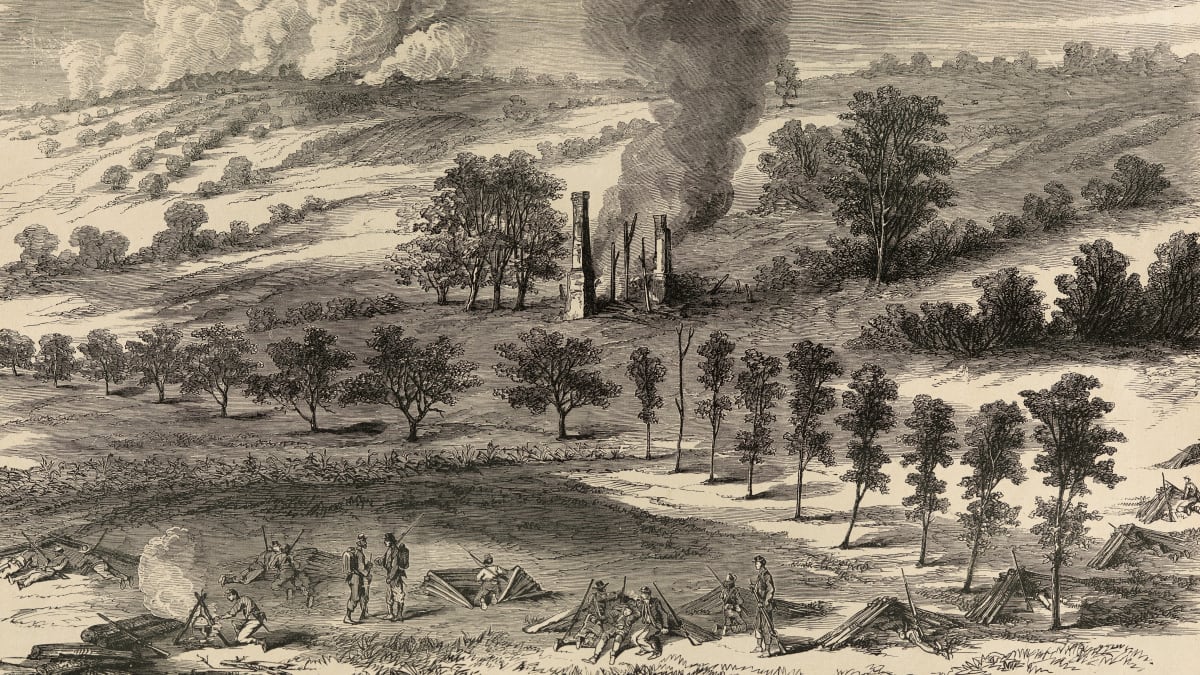 When Civil War broke out in 1861, Washington, DC remained the capital of the fractured United States and also the military headquarters of the Union Army. Richmond, the new capital of Confederation, was less than 100 miles away in neighboring Virginia.

Comparing the Civil War to a game of chess, the warring capitals of Washington, DC and Richmond represented kings, says Kenneth Winkle, professor of American history at the University of Nebraska Lincoln.

“The two capitals were so vital that capturing one would end the war,” says Winkle, author of The Lincoln Citadel: The Civil War in Washington, DC.

At the start of the Civil War, Washington, DC was extremely vulnerable to attack, defended by a solitary fort located 26 miles from the city center. But by the end of the war in 1865, Washington, DC was arguably the most heavily defended city on the planet, surrounded by an impenetrable network of 68 earth forts linked by miles of trenches, artillery batteries, and of military roads.

WATCH: America: The Story of Us: Civil War in HISTORY Vault

The Union’s first offensive was to defend Washington, DC

The fall of Fort Sumter to the South Carolina militia on April 13, 1861 marked the start of the Civil War, which was quickly followed by the secession of Virginia, the largest state to join Confederacy. Washington, DC was now directly across the Potomac River from enemy territory.

“It’s a very precarious position,” Winkle said, adding that Washington, DC’s other border was with Maryland, a slave state whose loyalty to the Union was fragile at best.

This is why the first offensive action of the Union army during the Civil War was to cross the Potomac to enter Virginia in the early morning of May 24, 1861 and to seize the heights of Alexandria and Arlington, including the family estate of Confederate General Robert E. Lee (which eventually became Arlington National Cemetery).

Union infantry quickly excavated the first earthen forts, Fort Runyon and Fort Corcoran, to prevent the Confederates from installing cannons that could easily strike the capital.

But it was the shocking defeat of the Union Army in July 1861 at the First Battle of Bull Run, just 30 miles from Washington, DC to Manassas, Virginia, that convinced President Abraham Lincoln and the Congress that the capital must be defended at all costs.

A 35 mile shield around Washington, DC

The formidable task of fortifying Washington, DC fell to Major-General John Barnard, a respected engineer in the military. Winkle says Barnard quickly recognized that the biggest challenge was Washington, DC’s sprawling layout, the result of architect Pierre L’Enfant’s ambitious grid design. The only effective way to defend all sides of the capital against attack, Barnard decided, was to establish a circle of fortifications surrounding the city.

During the winter of 1861 and 1862, Barnard led a team of army engineers, soldiers, former slaves and prisoners of war to build the first 37 earth forts which created a defensive perimeter of 35 miles around the capital.

By the end of the war, the “father of Washington’s defenses” – as Barnard became known – built a total of 68 forts, each made up of thick mud walls that could absorb cannonballs and heavy artillery. The soldiers cleared the forest in front of each fort, dug a deep trench like a dry ditch and built a barricade of sharp tree trunks called “abatis”.

Between the forts were 20 miles of trenches dug into the earth, called gun pits. Barnard also built 93 artillery batteries on prominent hills equipped with more than 800 cannons to reduce an invading force. Each fort was occupied by only a handful of permanent soldiers, Winkle says, but the entire defensive ring was connected by more than 30 miles of freshly cleared military roads to quickly move thousands of Union troops to the site of an attack.

Barnard’s successor, Lt. Col. Barton Alexander, even built a series of river obstacles to guard against a sea invasion. Known as the “Alexandrian Chain”, the device consisted of floats holding a 400-foot chain dragging 23 heavy anchors, but was never used in combat.

At the Battle of Fort Stevens, the fortifications proved to be “extremely solid”

During the protracted conflict, the Confederate Army made several sorties towards Washington, DC – Winkle says the battles of Antietam and Gettysburg were primarily designed to threaten the Union capital – but the city did not suffered only one direct attack.

Lincoln wanted Washington DC to be continuously defended by at least 30,000 regular infantry, but this was not possible in the summer of 1864 when General Ulysses S. Grant was in desperate need of reinforcements in Virginia. As of July, there were only 9,000 Union troops, mostly new green recruits and invalid reserves, to defend the capital, and the Confederacy saw a golden opportunity.

Lieutenant-General Jubal A. Early led 14,000 Confederate troops across the Potomac River to Maryland, then circled to attack the Union capital from the north. On July 11, 1864, Early’s army arrived at Fort Stevens, where Lincoln himself was standing with the fragile Union forces.

(Lincoln narrowly avoided being shot by a sniper rifle and had to be dragged out of the parapet where his tall figure and top hat made him an easy target. Oliver Wendell Holmes, Jr., the future Supreme Court Justice, fought at the Battle of Fort Stevens, and claims to have shouted at Lincoln, “Get down, you fool!”)

Early and his men made a few tries at the fort, but soon realized that even with their superior numbers, victory was impossible.

In Early’s own words, the fortifications “turned out to be extremely strong” and continued “as far as the eye could reach … of the same impregnable character.”

The dejected Confederate general concluded that “all the devices of science and unlimited means had been used to make the fortifications around Washington as solid as possible.”

Abraham Lincoln and Frederick Douglass: Inside Their Complicated Relationship