How Much Of A Say Should A Step Parent Have In A Child’s Discipline?

As someone who has been a stepparent and who also now has children of her own, I can tell you one thing for sure – blending families is not easy at all, and anyone who tries to tell you that it is probably isn’t doing it right.

For most people, I think deferring to the biological parents when it comes to things like discipline makes sense, but what would you do if your new spouse wanted to have more of a say?

This man and his ex-wife have co-parented successfully for nearly a decade and agree on almost all aspects of how they want to raise their kids – and that goes double when it comes to discipline.

My ex wife and I parted shortly after the birth of my 9 year old daughter, we also have a 12 year old son together. It wasn’t a messy breakup in the slightest, she just fell out of love, and we still maintain an incredible friendship today.

Co-parenting with her is easy, we have 50/50 custody (no courts involved) they spend a week with me and then a week with her, we live close by anyway anyway and they love the arrangement.

My ex wife and I both agreed on the way we would raise and punish our children should they misbehave that way the structure stays consistent and we don’t have one parent favoured over the other.

He dated his now-wife for seven years and saw no issues with her treatment of his children before they tied the knot.

I’ve been dating a girl for around 7 years now and she’s always been amazing to my children, last December we got married and things were fine up until now.

Recently, his daughter (9) was caught stealing chocolate from a corner store, and before he could get home and enact a punishment that felt appropriate to him and his wife – like walking her to return it and apologize – she took matters into her own hands.

She forced the girl to eat all of the chocolate, making her ill in the process.

He confronted her about it and told her, in no uncertain terms, that she did not get to go against the tactics that he and his ex-wife had decided on when it came to disciplining their kids.

Last week my daughter stole 2 pockets full of chocolate from a little corner store, where as my ex and I would have marched her into the store, return the chocolate to the owner and apologize, my new wife took my children home, sat my daughter at the table and forced her to eat the entire lot by herself, making her brother watch.

She continued to make my daughter eat even after she’d complained of a belly ache. My son told me when I got home from work.

She argued back, saying that she was their stepmother and she should get some say in the matter, and when he disagreed, she ended up going to stay with her mother.

I immediately confronted my wife, telling her that my ex and I both had a system in which to discipline our kids and that she has absolutely no choice in that, that if she’s to punish the children she goes by our agreed upon methods. It keeps everything consistent and I didn’t appreciate her making my daughter feel sick (she slept all night and skipped dinner because of her stomach).

I got the silent treatment for a few days before she said she just couldn’t handle the sight of me anymore and went to stay with her mother.

He’s standing his ground after speaking to his ex-wife but he’s not sure how to deal with his current wife, since she doesn’t seem inclined to respect his boundaries.

Of course her mother is now calling me an AH and saying that I’m treating her as an unequal parental figure in the house and that she should have a say in how the kids are raised as well considering she’s the stepmom.

I spoke to my ex about it and she agrees with my stance and thanked me for standing up for our choices and defending our agreement.

After reading the comments he spoke at length with his older child, his son, and found out this has been going on for some time and constitutes abuse.

Things blew up quite dramatically in the last 20 hours and I’ve had the chance to have a talk with my kids about their treatment while I’m not at home. As a lot of people suspected and warned me, and what I feared, she’s been using her own parents punishment tactics on my son whenever he misbehaves.

This has included making him stand out in the sun on the concrete until she lets him go (as punishment for jumping in the pool when he was told not to), ripping up his sketchbooks (punishment for drawing on his desk) and putting his hands in icy water (punishment for stealing an ice pop). My son only rang the alarm this time because it was his sister who was punished.

Again, I confronted my wife and she doesn’t seem to find a problem with her actions and claims it was all related to the behaviour he exhibited.

Needless to say I’m not happy and she’s gotta go.

Always listen to your kids, folks.

Here’s what Reddit had to say that left OP no choice but to go digging for more.

The top comment is short, sweet, and to the point. 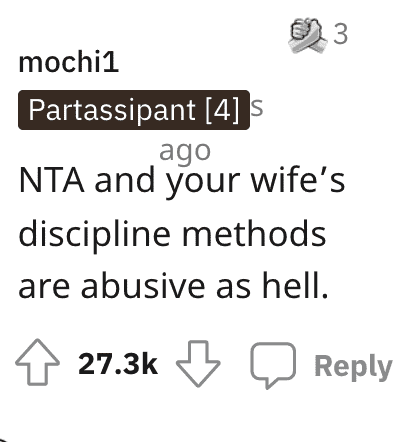 While his person thought he might be able to give his wife the benefit of the doubt. 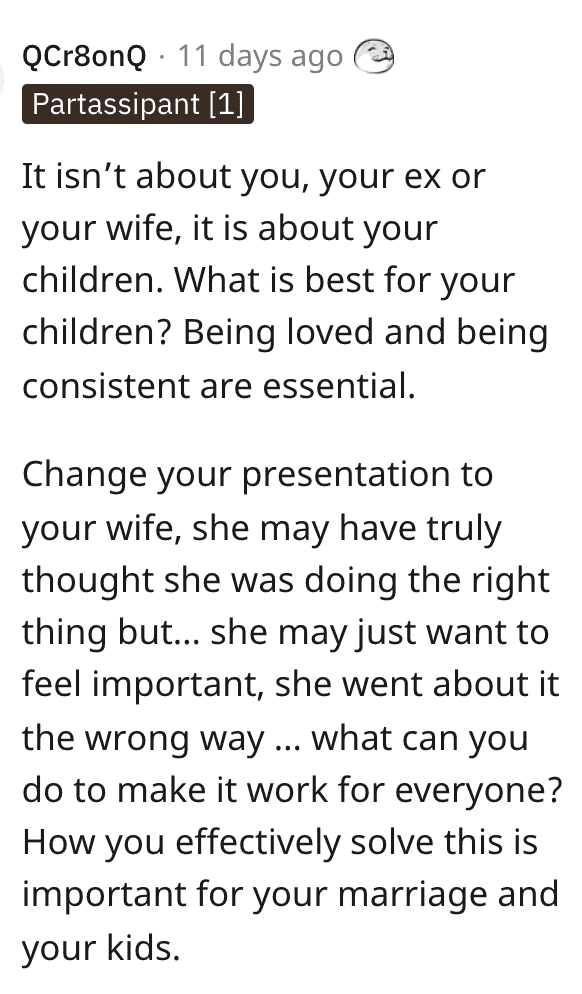 Plenty of comments, though, came down on the side of stepparents having no real authority to make any decisions of their own. 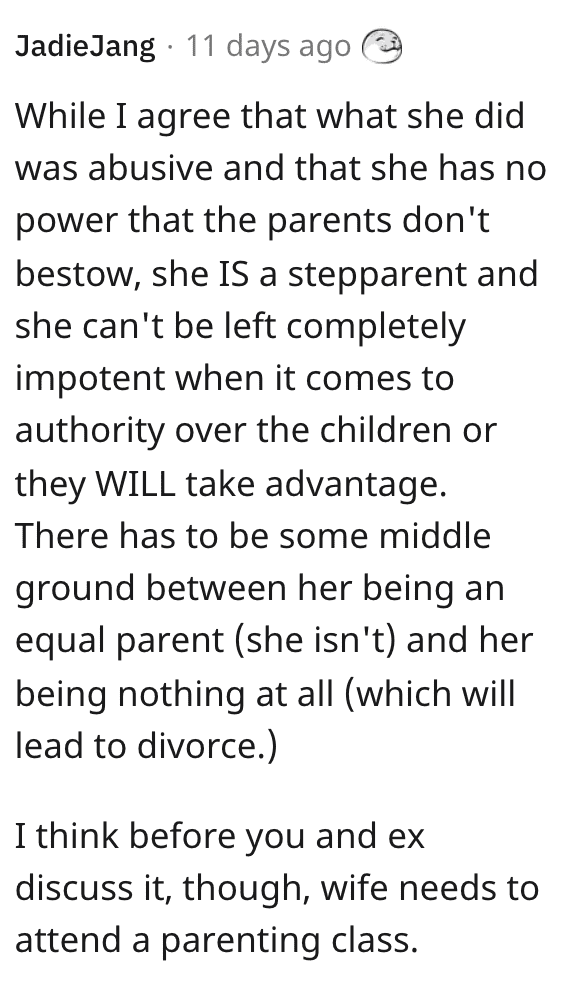 Everyone pretty much agreed that her tactics were questionable at best. 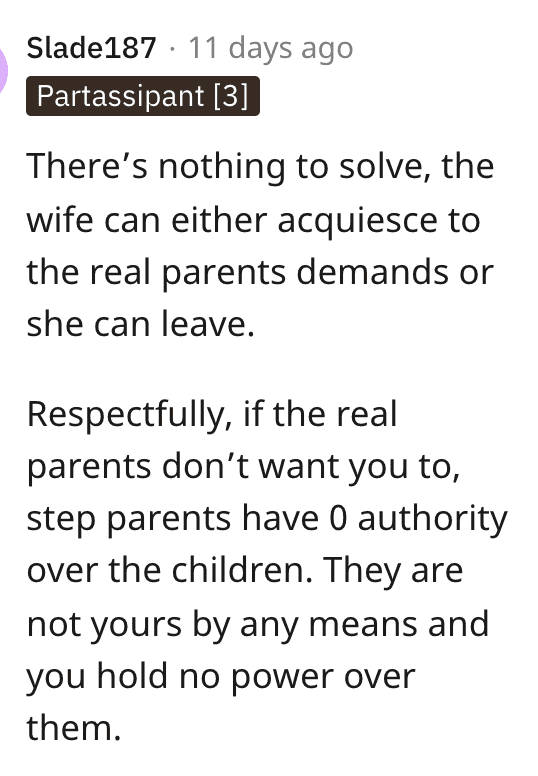 Nothing good is likely to come from this. 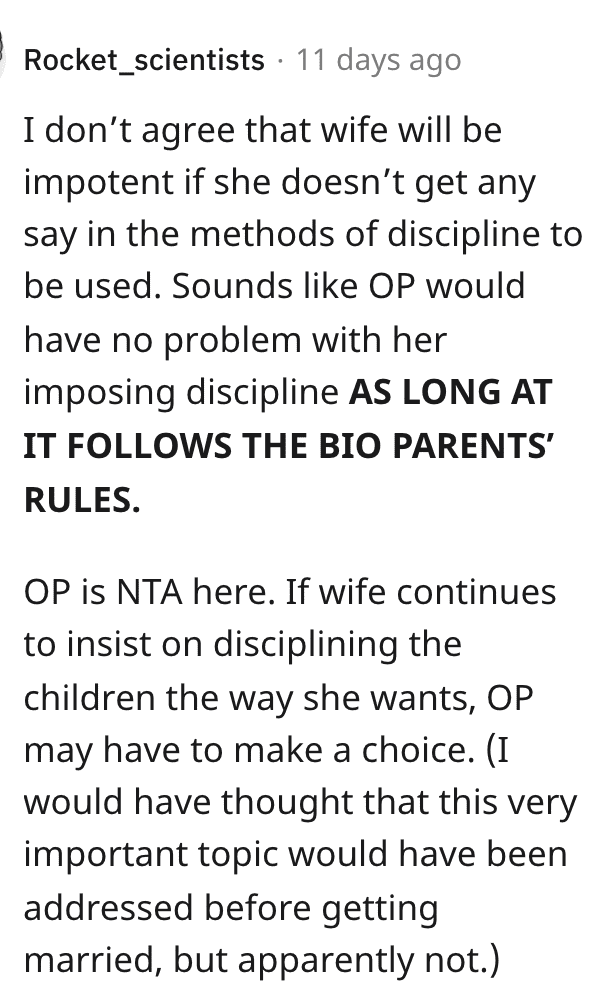 I’m so happy that OP has chosen his children over his wife, who seems to have no remorse and no ability to see another point of view. I hate that his kids had to suffer first, but you don’t know until you know.

How would you have handled this as a parent? As a stepparent? Sound off in the comments!