Family dynamics are always interesting and occasionally challenging. When you’re dealing with a sibling who struggles with their mental health, complications can run rampant – and so can our emotions.

For this woman, she’s dealt with a bully for an older sister her entire life. The sister’s meanness and wrath was largely directed at a middle sister who has since passed away, which compounds the negative feelings between the two who are left.

My oldest sister has always been abrasive and a hard person to connect with. She resented our middle sister her entire life and treated her like shit for practically no reason. Unrelated to all that, our middle sister tragically passed away a few years ago.

It hit us all really hard but especially me since we were extremely close best friends and did everything together. Since then I’ve tried multiple times to rekindle my relationship with my oldest sister but we just dont connect like that.

OP clarified in a comment that their parents did try dealing with the situation when the three girls were younger and living under the same roof. From typical discipline attempts to full-blown therapy and talk about medication, nothing ever seemed to alleviate the anger and lashing out from their eldest.

My parents didnt “allow” this all to happen for 20 years. They took her to multiple counselors and psychologists/psychiatrists. Some had theories that it could be aspberger’s or something like that but my sister was extremely violent and defiant of any kind of professional help. She would not go to any of these and would not cooperate with any counselors trying to help.

This brings up some uncomfortable questions: How can a person be helped if they do not see their behavior as problematic? Is it moral to force a person to take medication because of their behavior? (I’m not a psychiatrist, is there even a medication available to treat this kind of extreme uncontrollable anger and violence?) If not how can you morally succumb to that behavior if it results in a horrific violent act in the future? Would you be responsible?

These are difficult questions. My original post doesnt communicate this well because I wrote it when I was emotional and angry. The point is that my parents tried. They didnt just turn a blind eye to this. They tried getting professional help, they tried consistent discipline. After speaking with my mom today she asked the question that comes to mind after you realize all of this information: “what could I have done?” What is there to be done differently? Being honest I dont know what I would do as a parent in this situation. Again, these questions are difficult but god forbid what if inaction leads to a horrible act in the future?

I understand this changes the dynamic greatly, however I wasnt aware of a lot of this information until after I spoke with my parents just now. The situation is a lot more nuanced than the way I originally presented it and that’s on me.

Now that the middle daughter is gone, the younger one feels as if their older sister has moved on to using her as a punching bag – and she doesn’t want to have anything to do with it.

The last few months my oldest sister has been angrier/meaner than usual. When she’s in an angry mood she’ll say and do anything she can to hurt you including things as extreme as telling me my middle sister hated me and that she wishes she were dead instead.

This all erupted into a screaming match last night which was immature on my part but I lost my temper. It ended with me snapping back and saying that she bullied our sister her entire life and now that she’s gone she needs a new younger sibling to bully.

OP lost her cool, telling their older sister she should be ashamed and that she wouldn’t be able to live with herself if she’d treated their middle sister the way she had.

I told her she should be ashamed of herself and I wouldnt be able to look myself in the mirror if I had treated someone so badly their entire life. That hit hard and she left the house after.

My parents were livid as if I had just done something astronomically horrible and yelled at me for a long time telling me I had crossed the line. I’m not saying my parents take her side but they certainly dont hold her accountable for the way she treats people.

Their parents think OP went too far lashing out, but OP feels like its time someone came out with the hard truth.

Despite the clarification, some people feel like the parents didn’t do their absolute best by all of their children growing up. 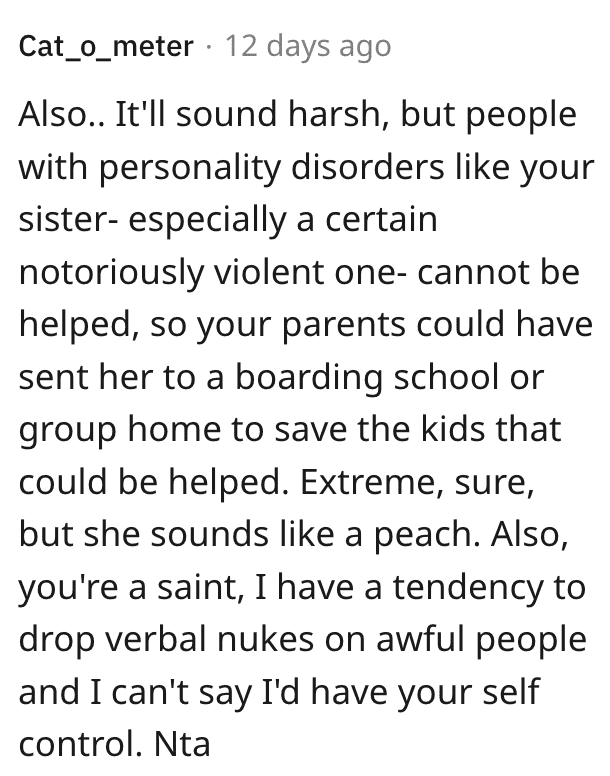 So it might be complicated, but that doesn’t make OP the a$$hole. 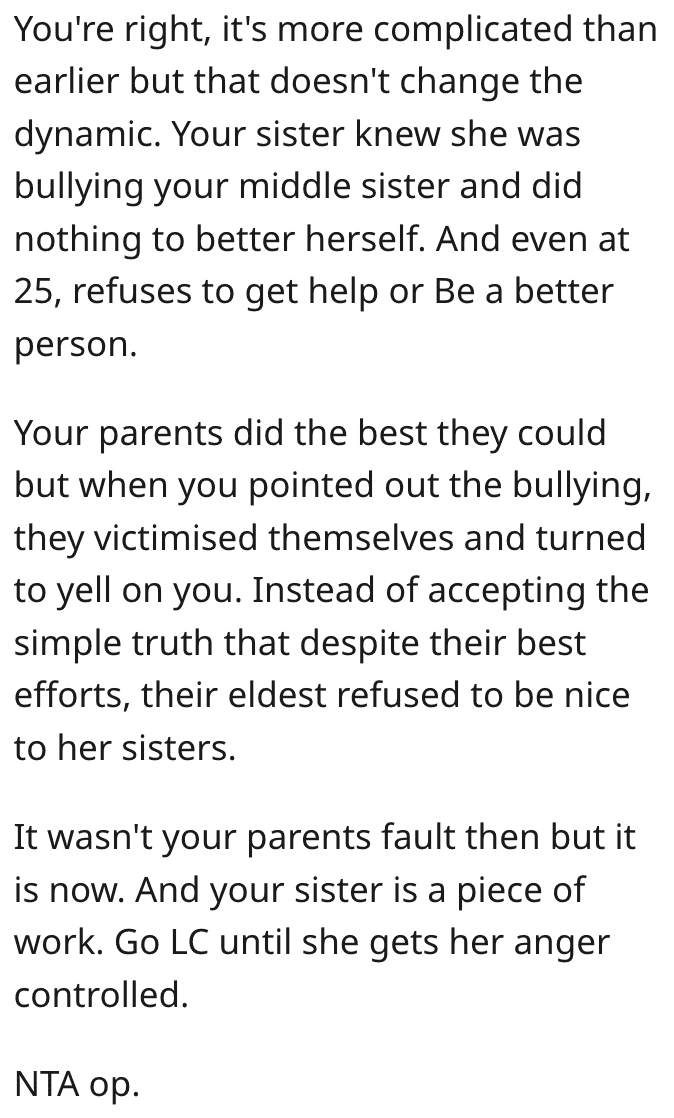 While others disagree that their parents did everything they could to help even the older, struggling sister. 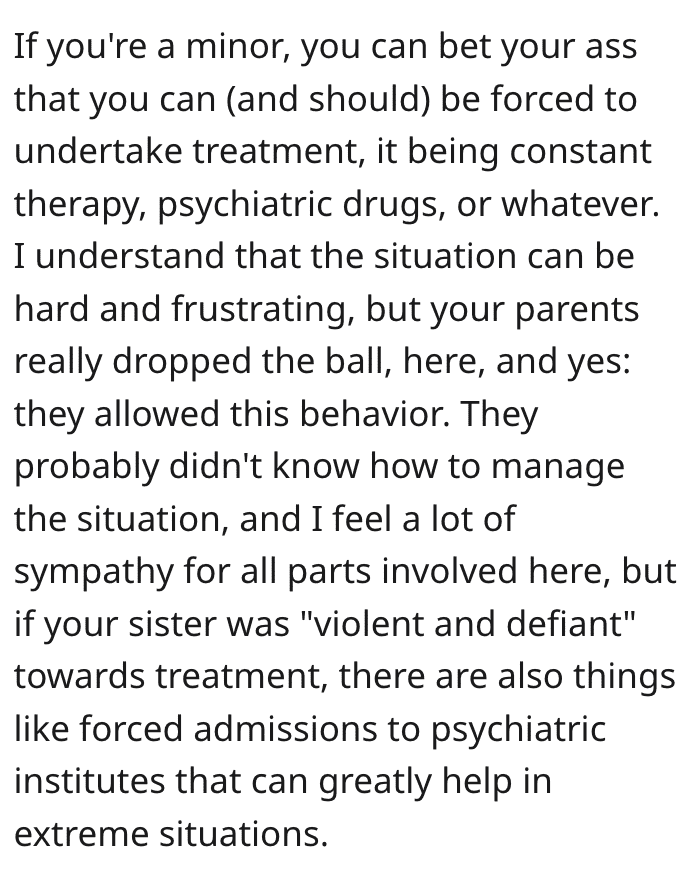 There are certain boundaries parents should not allow their children to cross. 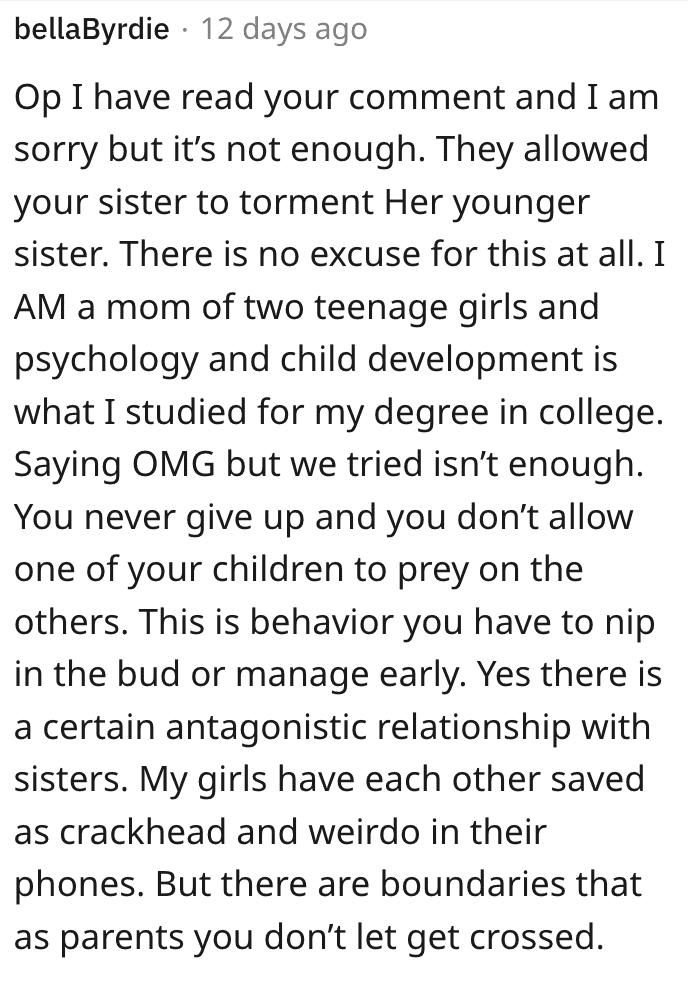 There are always things that can be done. 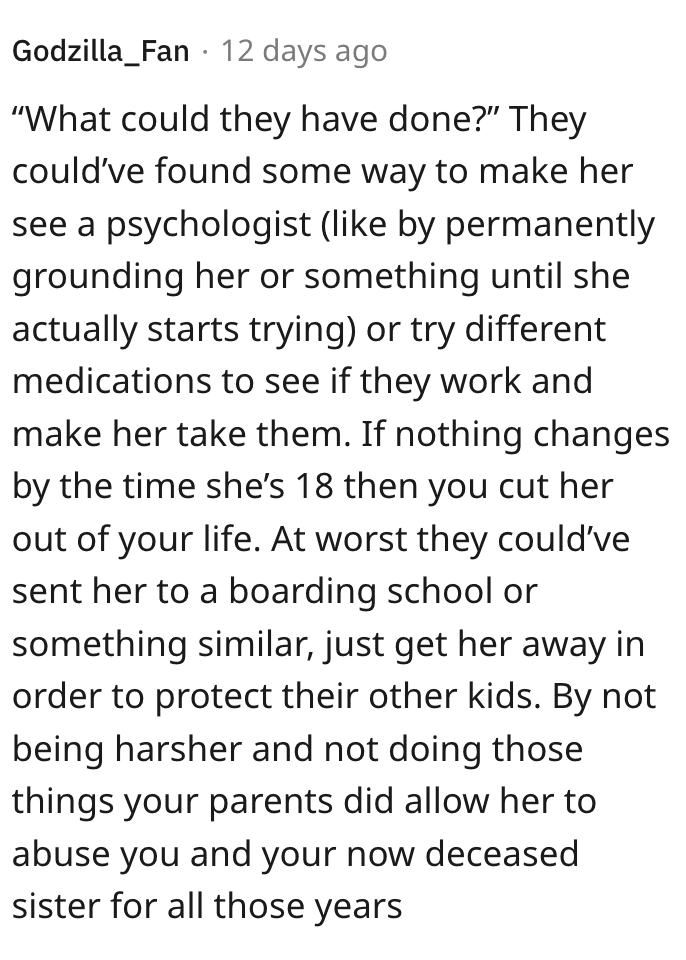 This is a sad, sad story that I hope one day can have the happiest possible ending.

How would you have handled this as a parent? Do you think they did their best? Was it good enough? Let’s hash it out in the comments!