Here’s All the Past, Present, and Future Missions to Mars

SpaceX founder Elon Musk says travel to Mars is within reach, with the possibility of having 1 million people living on Mars within 100 years. SpaceX isn’t alone in working toward reaching Mars, however. In fact, there are quite a number of missions, both crewed and uncrewed, that are currently planned or under proposal from government space organizations and private space flight companies across the globe.

Exploration of Mars and eventual human travel to it are nothing new. While manned missions have remained financial and logistical near-impossibilities, unmanned missions began in 1960. There have been around 50 Mars missions so far, of which about half have been successful — a testament to the difficulty in reaching the red planet.

As it stands right now, currently operational on the planet there is one lander (InSight) and two rovers (Curiosity and Perseverance), with another rover (ExoMars) planned for launch next year. Orbiting Mars are eight satellites, providing massive amounts of data on our dusty neighbor.

It doesn’t end there. Many more missions are planned for the 2022 and 2024 launch windows, and there are proposals to put humans on Mars by the 2030s.

This portion of the list includes the world’s most notable past missions, most of which are still in operation.

Named after the iconic sci-fi novel and film 2001: A Space Odyssey, Mars Odyssey is a NASA orbital satellite that is currently about 2,400 miles above Mars’ surface. It launched on April 7, 2001, and holds the record as the longest-operating spacecraft orbiting Mars. Mars Odyssey’s mission was to find proof of past or present water on Mars, using spectrometers and a thermal imager to map out the distribution of water, which was successfully proven on July 21, 2008, by the Phoenix lander. Mars Odyssey also serves as a communications relay between Earth and Martian rovers, the Mars Science Lab, and the Phoenix lander. It is projected to remain in operation until 2025.

Mars Express was launched along with the Beagle 2 lander by the European Space Agency on June 2, 2003. While Beagle 2 suffered a lander failure, the Mars Express satellite has remained in successful communication with Earth. Mars Express was launched with the intent of surveying Mars’ surface using high-resolution cameras, radars, and spectrometers. Thus far, Mars Express has discovered water ice and carbon dioxide ice in Mars’ southern ice cap, along with an area of liquid water underneath, and has provided better detail of the elemental and chemical makeup of the planet’s surface and atmosphere. The project has also resulted in a topographical map of Mars, high-res surface images, and flybys of Mars’ moon, Phobos. This data has been incredibly valuable and has earned the craft several end-date extensions. It’s currently scheduled to remain in operation until the end of 2026.

The Spirit and Opportunity rovers arguably represent one of the biggest success stories of the current NASA space program. Launched separately in summer 2003, the pair of rovers arrived on the red planet after about six months. Initially, the plan was for a 90-day mission to study the geology and atmosphere of Mars. But the two rovers didn’t quit: Spirit would continue to transmit until March 2010, and Opportunity until June 2018! The pair of rovers are widely credited with providing the first solid “ground truth’ that at one time” Mars was much wetter than it is today.

On August 12, 2005, NASA launched the Mars Reconnaissance Orbiter (MRO), which entered Mars’ orbit on March 10, 2006. The MRO has been observing the landscape and has made numerous high-profile discoveries, including the recent observance of flowing saltwater on the surface and subsurface of the planet. MRO was also used to find a landing zone for the Phoenix Lander, and acts as a relay for communications between active rovers and Earth.

Like nearly all other unmanned craft listed here, NASA’s Curiosity was made to study the landscape and climate of Mars, comprising the rover portion of NASA’s Mars Science Laboratory (MSL). Specifically, Curiosity is looking for potential evidence of microbial life-sustaining conditions — either past or present — and assessing Mars’ habitability ahead of human contact. Its most notable find so far is the discovery of organic molecules on the planet’s surface in 2018. The rover is equipped with a vast array of instruments and cameras and has been operational on Mars since 2012. 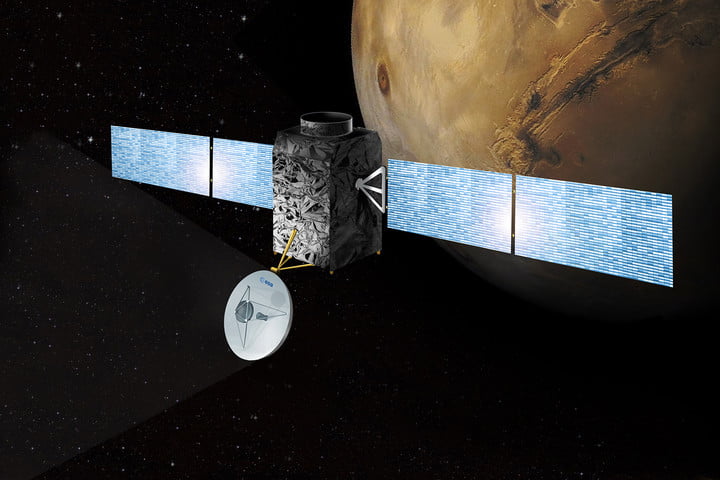 The Indian Space Research Organization (ISRO) launched its first interplanetary mission on November 5, 2013. Dubbed “Mangalyaan,” the craft is an orbiter that has primarily been used as a proof of concept for ISRO’s interplanetary tech capabilities, testing various flight and communications systems, and providing telemetry data. Mangalyaan is also outfitted with a small suite of research instruments designed to capture atmospheric data. It is also the cheapest Mars mission to date, costing only $73 million U.S. 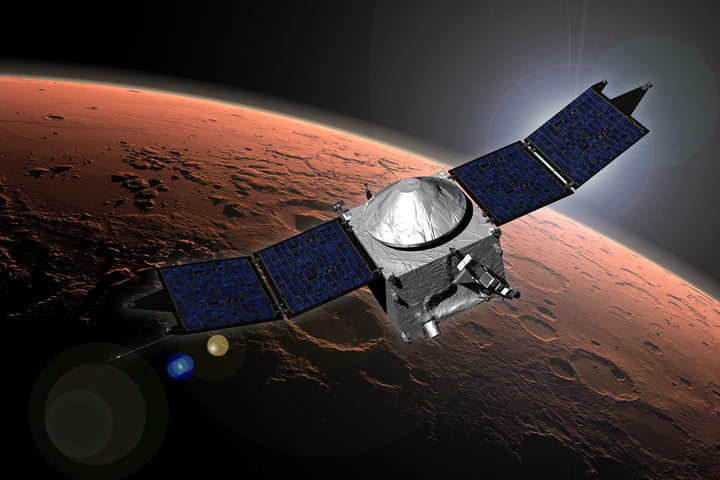 The Mars Atmosphere and Volatile Evolution Mission (MAVEN) is currently searching for explanations for how and why Mars’ water and atmosphere have been slowly deteriorating and escaping. After entering orbit in 2014, it was quickly able to confirm that Mars’ atmosphere was escaping into space, and further observations found the planet’s magnetic field is more like a tail, disrupted by the solar wind. This could explain the Red Planet’s loss of atmosphere, but scientists are still investigating. 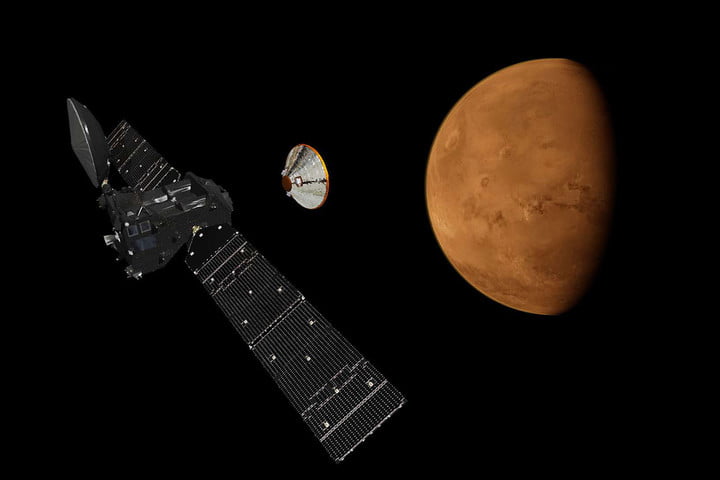 Launched in 2016, ExoMars is the first in a series of joint Mars missions through a partnership between the European Space Agency and Russia’s Roscosmos. The mission actually included two probes, the ExoMars Trace Gas Orbiter (TGO) and the Schiaparelli EDM Lander, however the lander crashed on the Mars surface after being delivered by the TGO. Researchers hope to gain a better understanding of methane and other trace gases present in the martian atmosphere that could be evidence for possible biological activity. 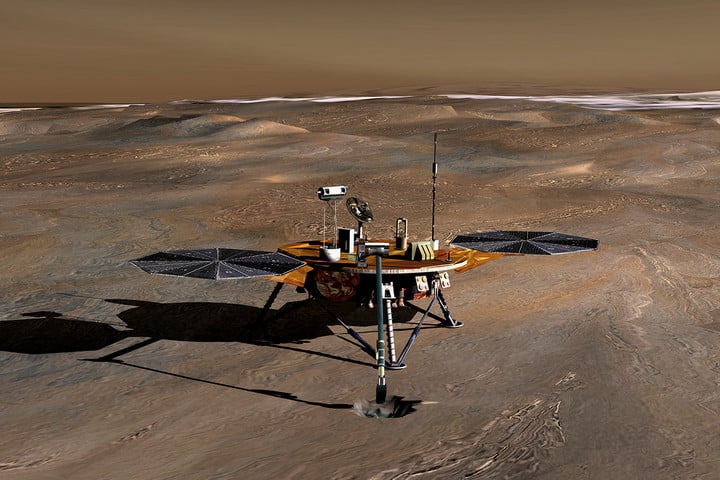 Launched in May 2018, with a successful landing in November of that year, the InSight Lander, short for ‘Interior Exploration using Seismic Investigations, Geodesy and Heat Transport,” aims to study the core of Mars and observe any possible seismic activity on the planet’s surface. It is hoped the data collected will lead to a better understanding of how rocky planets such as Earth, Mars, Venus, and Mercury are formed. In its first year, the lander enabled new findings about the weather, geology, and magnetic fields of the planet, but its investigations have been somewhat hampered by an ongoing problem with a stuck heat probe. The mission was extended for another two years in 2021, but the engineers have given up on fixing the heat probe so the lander will have to continue without it. 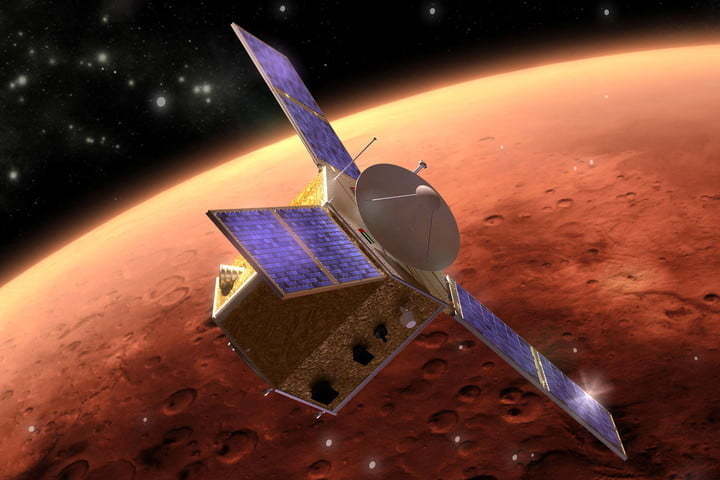 Hope is a notable mission for one big reason: It marks the first Mars probe launched by any Arab or Muslim country. Announced by Sheikh Khalifa bin Zayed Al Nahyan, president of the United Arab Emirates, Hope aims to discover why the planet has lost its atmosphere. The findings are also expected to help scientists better model our own atmosphere going back some 1 million years. Launched in summer 2020, the probe arrived at Mars in February 2021 and began its observations of the atmosphere. 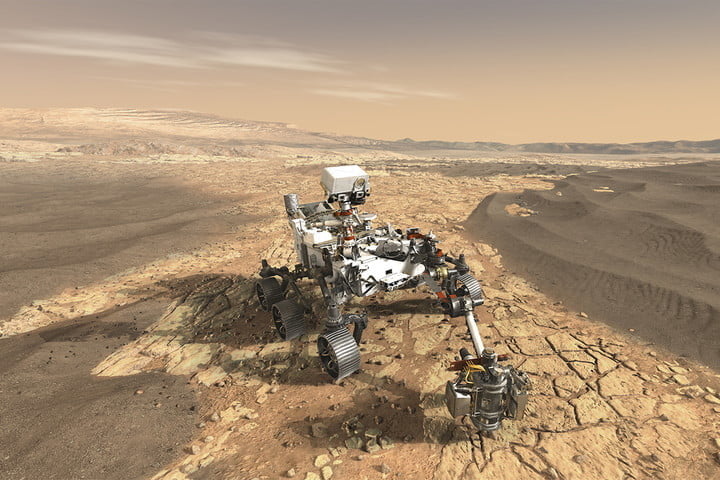 This NASA mission aims to search for evidence of ancient life on Mars and to understand what the planet’s environmental conditions may have been in the past. A main objective is for the rover to collect samples of rocks, minerals, and other materials on Mars which can then be returned to Earth in a later mission. Launch took place in summer 2020, and the rover touched down in the Jezero Crater in February 2021.

China’s National Space Science Center launched its interplanetary mission to Mars in July 2020, which entered orbit around the planet in February 2021. The mission’s payload includes an orbiter, a lander, and a rover. The mission will serve as a technological demonstration of the resources and tech required for a Mars sample return mission, proposed to occur in the 2030s.

Thanks to a launch window when Mars is closer to the Earth, enabling shorter trips, and a bit of coincidence, there are quite a few Mars mission launches scheduled for summer 2020. The ones on this list are by no means the only ones. There are no less than seven already confirmed missions through 2024, and at least a dozen more through the mid-2040s.

For the purposes of brevity, we’ll focus on the confirmed missions here in depth, but we’ll also talk about the proposed missions later on. 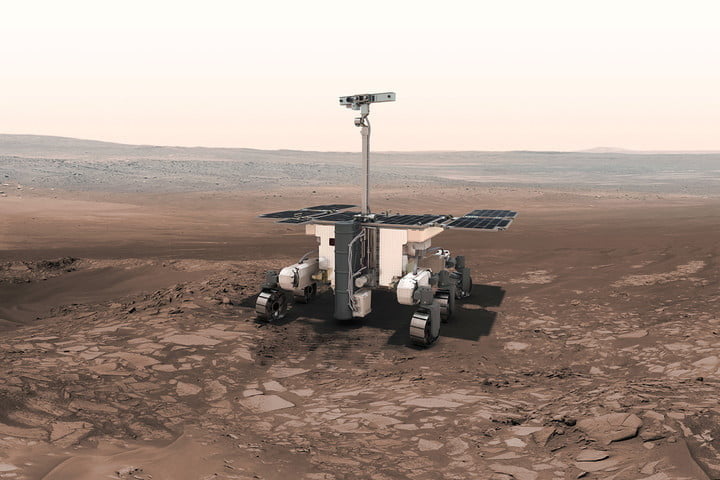 Named for English chemist and DNA pioneer Rosalind Franklin, this rover comprises one part of the joint ESA-Roscosmos ExoMars mission, which aims to search for evidence of past or present life on Mars over the course of its seven-month operation. ESA will provide the rover, while Roscosmos will supply the lander. The launch window was moved from 2018 to July 2020 due to production delays and then delayed again due to coronavirus in March 2020. The launch is currently set for 2022.

The Mars Terahertz Microsatellite is a joint venture of Japan’s National Institute of Information and Communications Technology (NICT), and the University of Tokyo Intelligent Space Systems Laboratory (ISSL) to send an orbiter and lander carrying a terahertz sensor to Mars. The terahertz sensor will be sent to the surface to measure oxygen isotope ratios in the atmosphere to better understand the chemical reactions that resupply the Martian atmosphere with carbon dioxide. The lander (TEREX-1) was originally intended to be launched as a piggyback payload with another Mars-bound mission during the July to August 2020 launch window but has since been delayed to 2022. The orbiter (TEREX-2) is planned for launch in 2024.

Mangalyaan 2 is the Indian Space Research Organization’s follow-up to its initial interplanetary mission to Mars. An orbiter has been announced as the main component of the mission thus far, with a lander and rover as potential additions. There has been no official announcement of the launch date, but it is expected to be around 2024.

Japan plans to send a probe to Mars’ largest moon Phobos in 2025. It will land on Phobos, collect samples, and also observe the smaller moon Deimos and Mars’ climate during flybys of both. The probe will then send the samples back to Earth. they are expected to arrive in July 2029.

China’s CNSA has plans for a Martian return in 2030 to bring back samples from the Tianwen-1 exploration. Roscosmos also plans to have Russian feet on the red planet sometime between 2040 and 2050. The ISRO has aspirations to launch a lander to Mars in the 2020s, and the UAB also plans to launch its own Mars explorer.

However, private companies face much less restriction than the above, so their space travel dreams (and prospects) are much more ambitious. SpaceX’s plans have been continually evolving and hard to pin down, but they appear to be planning some kind of Mars expedition for the 2020s. Elon Musk wants to land SpaceX’s first Mars transport ship in 2022, followed by four other vehicles during 2024.

While this might seem lofty and aspirational (Musk admitted so himself), especially because similar projects like Mars One failed catastrophically, our mission to go to Mars is far from over. While the Mars One project faced bankruptcy in 2019, SpaceX is still going strong, and we’ve still only just scratched the surface of prime space exploration.