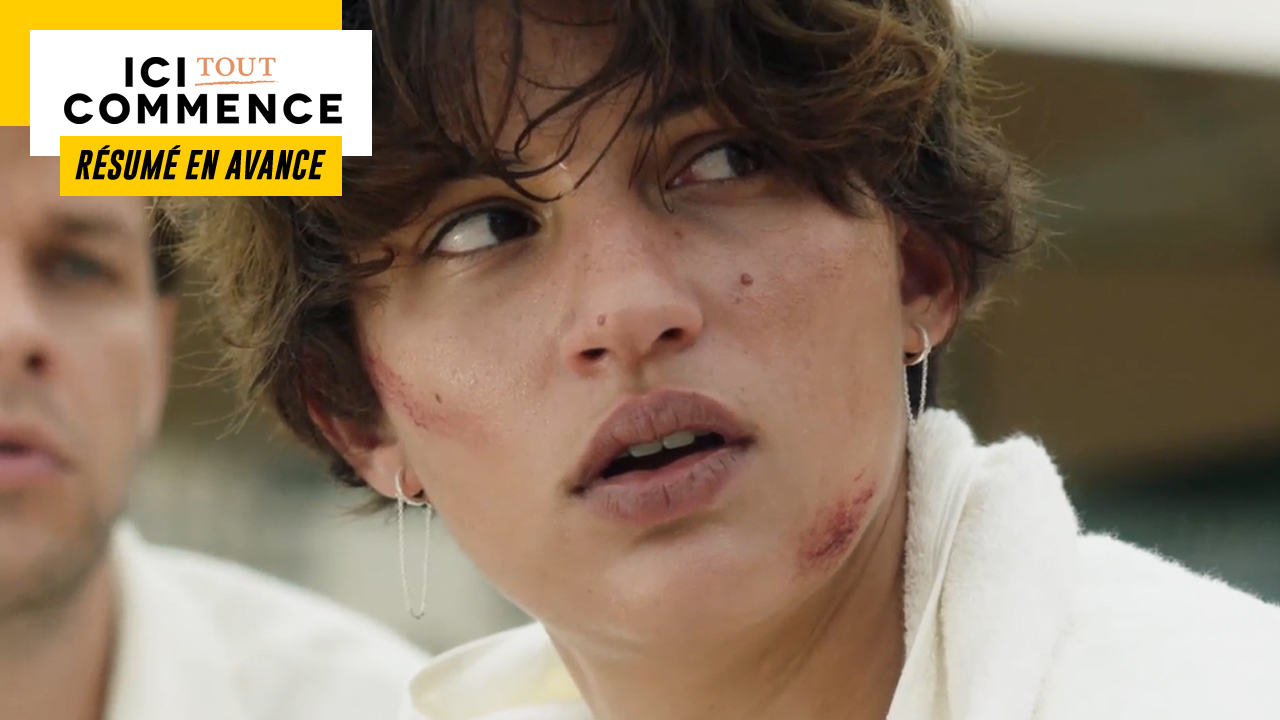 In the next episode of “Here everything begins”… Noémie has been kidnapped and Clotilde and Joachim cannot find a balance at work. As for Laetitia, she finds a solution for Tony and Gaëtan.

Tuesday, August 9 in Here it all starts…

NOÉMIE HAS BEEN SEQUESTRATED

After finding a prepaid phone in Chef Cardone’s car, the students are convinced that she is the blackmailer. They then decide to put a plan in place to make him confess his misdeeds and to exonerate Swan once and for all. Determined to put an end to this story, Salomé wishes to confront her by putting her on the fait accompli.

Salome shows the prepaid phone to Cardone in front of Chief Teyssier. Right away, she accuses him of being the crow that’s been tormenting them since the start of the National Baking Championship. Moreover, she is convinced that Annabelle tried to trap her second by depositing a polaroid after attacking Enzo. Emmanuel takes the situation in hand by clarifying things with his colleague. Indeed, he knows better than anyone how vicious the chef can be to get what she wants. Although she maintains her innocence, Cardone decides to call the police herself to investigate the theory.

A little later, Chief Cardone is brought to the police station. Before leaving, Annabelle assures her rival that she will be back before the start of the last test, but Emmanuel is convinced that she will not set foot in the Beaumont hotel again. At the same time, Greg and Eliott apologize to Salome for doubting Swan’s sincerity.

At the same time, Noémie, who has been missing for several days, appears in a very worrying state at the side of the road. The young chef tries to stop the cars passing by her but in vain.

At the Beaumont Hotel, Benoît announces to all the brigades that Chief Cardone has been placed in police custody. Following this announcement, chef Bury wonders if they should stop the pastry championship, but chefs Teyssier and Delobel categorically oppose this idea. After all, they continued to compete despite Noémie’s disappearance. Why would they stop now? Eventually, Chief Bury decides to hold the last trial.

Later, Swan and Salome finally meet at the hotel. Since Chief Cardone was taken into custody, Swan is no longer a suspect and no longer needs to hide. However, Annabelle has not yet confessed anything to the police, to the chagrin of the student. Indeed, Salomé would like to understand why Cardone is so obsessed with them and what her real motivations are. For his part, Swan seems somewhat disturbed by his girlfriend’s quest for the truth. As they kiss, they are interrupted by Noémie who calls out to them.

If Noémie is in a worrying state, she somehow tells Salomé what happened to her. For the past few days, she has been held captive in a cellar. But today, the hatch of this one was badly closed and she managed to escape. The student then tries to reassure her by explaining to her that Chief Cardone has been arrested. However, Chief Matret makes a shocking announcement: it is not Annabelle who kidnapped her.

CLOTILDE AND JOACHIM CANNOT FIND A BALANCE AT WORK

Early in the morning, Clotilde and Joachim are more accomplices than ever. Moreover, the couple can not leave each other when they have to go to work.

A little later, the students prepare the lunch service in the kitchen. The chef has put steamed fish ballotines on the menu, but one of the ovens is broken. Planned by Tom, Joachim arrives more than an hour late and attracts the wrath of Clotilde who reminds him that the double A must be his priority.

While the service is in full swing at the restaurant, the steam oven is still not repaired, much to Clotilde’s chagrin. Indeed, chef Armand is very upset since many customers order the ballottines and with only one operational oven, the dishes are very late. So she confronts Joachim but the young man doesn’t have the proper equipment to fix it properly. However, Clotilde leaves her no choice and raises her voice in front of everyone.

At the end of the service, Clotilde learns that a dozen customers received their dish late and that two could not be served at all. If Ambre took care to offer coffees or desserts to overcome this inconvenience, the chef Armand is annoyed by the situation. During this time, Joachim seems to have repaired the oven but it fails after a few seconds. So, Clotilde can’t keep her cool and an argument breaks out between them in front of the students. Then, she ends up taunting him by saying that maybe they shouldn’t have hired her.

LAETITIA FINDS A SOLUTION FOR TONY AND GAËTAN

The coffee shop project is beginning to take shape. Tony and Gaëtan are working hard at the marshes to create a simple and qualitative map. However, Solal comes to tell them terrible news: Caplan, the owner of click and collect, refuses to rent them the premises since he knows that Gaëtan has no training in the kitchen. Unfortunately, the project will not see the light of day.

Tony and Gaëtan are upset. They gave everything to build this project but their efforts were not enough. They thought they could convince the owner with their innovative idea but without success. For her part, Laetitia tries to motivate them. She assures them that they will eventually find a solution.

A little later, Mr. Caplan goes to Muriel’s office because he has to give her a list of graduate students who could potentially take over the Table des Rivières. Antoine being late, Laetitia decides to take the situation in hand with a small idea in mind. Indeed, she first shows him the list of third years, but most of them already have plans for the future. Then, she claims to have a very talented former student whom she would like to introduce to her at the swamps tomorrow. When she leaves, Laetitia sends a voice message to Tony assuring him that she has finally found a solution.

At the end of the day, Laetitia explains her plan to Tony and Gaëtan. Since Monsieur Caplan already knows Gaëtan, she will introduce him to Tony as a former student of the institute who has cooked all over the world and who is trying to return to a simpler concept. However, the sports teacher fears that the deception will be discovered. Indeed, it could bring them big problems. But Laetitia is convinced that they will be able to fool him without any problem.