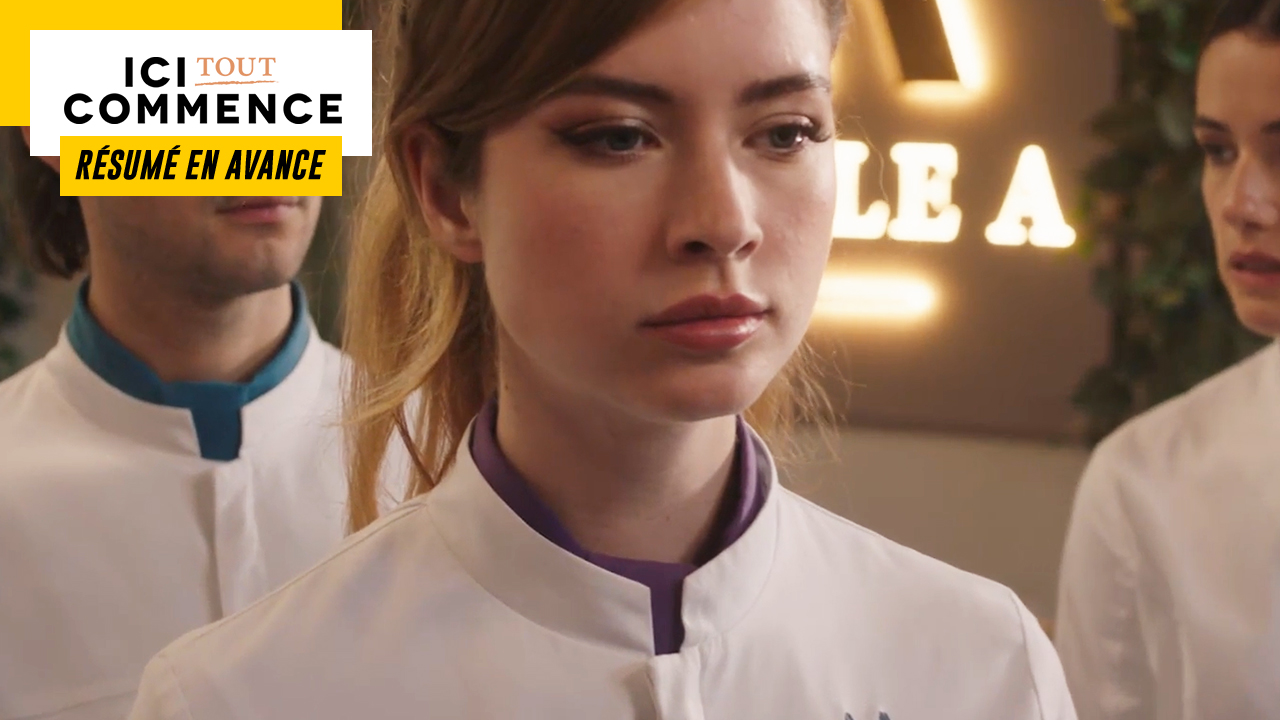 In the next episode of “Here it all begins”… Célia sabotages her cooking test with Charlène and Théo discovers the theft at the commissary. As for Tony, he is in Calvières to find someone.

Thursday, June 23 in Here it all starts…

CÉLIA SABOTAGES HER ORDER WITH CHARLÈNE

The last part of the inter promo test is about to begin. In the locker room, Theo shares his concerns with Célia. The situation with Charlene has not improved and he knows that his girlfriend can get carried away quickly. But Celia is lying to him. She makes her boyfriend believe that she will control herself and not ruin their ordeal. Theo is delighted. He knows how difficult it is for her to make this concession and understands that she has not forgiven her sister after the harassment she suffered.

The test is about to begin. Clotilde reminds them of the terms: the average of the two juries will constitute their score. They must not neglect the plates of the customers, because their opinion counts just as much as that of the teachers. Chef Armand gives them the start.

For their part, Célia finally accepts Charlène’s proposal: they are going to offer a revisit of the cream puff. The Teyssier girl is very surprised because the day before, her friend thought her recipe was too classic. To avoid a fiasco, Charlène clarifies things: they follow her recipe without arguing. Celia pretends to accept his conditions and promises him to be a perfect soldier.

At the same time, Eliott and Anaïs have fallen far behind in their preparations. Clotilde notices this and tells all the students that this meeting is eagerly awaited by the customers. She summons the pair to hurry because all the dishes have to leave at the same time.

At the same time, Landiras watches over Charlène and Célia. The second-year student is finishing whipping the cream and her buddy wants to check that she hasn’t added too much orgeat syrup. Charlene is delighted with her dosage and takes the opportunity to admit that she has gone too far by spilling her preparation on her. While the Teyssier girl slips away to look for puffs to stuff, Célia takes the opportunity to add a lot of syrup to the cream, ruining their recipe.

The ordeal is about to end. Enzo and Mehdi are very proud of their dessert, and Anaïs and Eliott are still hesitant about their presentation. Suddenly, Charlène realizes that the mascarpone cream has turned yellowish and questions Célia. The student tries to reassure her: she’s probably oxidized, but everything will be fine.

Place at the tasting of the jury of chefs with Clotilde, Zacharie and Emmanuel. They think that Hortense’s duo could have gone further: it’s a 12. The training of Anaïs and Eliott is not accomplished enough and the whole thing lacks contrast, they get a 9. For the duo Greg and Eliott Salomé, the chefs think they should have chosen between prawns and sole, so they give them an 11. The jury is impressed by Mehdi and Enzo’s dessert: it’s a 15. It’s Charlène and Célia’s turn. When Clotilde takes a bite, her face tenses up. The Teyssier girl understands that there is a problem. They get a 5, because the orgeat syrup is too present. Charlène confronts her buddy, but she plays the innocent.

The students continue directly with the tasting of the regulars of the double A. While Enzo is convinced that they will be more lenient than the chefs, Charlène thinks that their note will not help anything because Célia has sabotaged their dessert.

The verdict is in, the students discover their overall score: Hortense and Hugo get a 12.5, Lionel and Jules have an 11, Salomé and Greg get a 13 and Anaïs and Eliott have convinced the customers and go back to 13. As for Enzo and Mehdi, the customers appreciated as much as the chefs, it’s a 15. Teyssier finishes with Charlène and Célia, the duo remains at 5. In front of everyone, Charlène accuses her sister-in-law of sabotage and affirms that she added orgeat syrup on his back. She refuses to be penalized because of her, but Celia continues to pretend that she did nothing. The student does not understand, yet she followed her classmate’s recipe to the letter. However, she had warned him because she found his idea bad. According to her, Charlene can only blame herself.

THEO DISCOVERS THE FLIGHT AT THE COMMERCIAL STORE

Antoine is overwhelmed by calls from parents of students who are unhappy that their child has been expelled from the institute. The principal tries somehow to find a solution to cancel Teyssier’s sanction, but in vain. Auguste Armand had not foreseen this eventuality and therefore did not provide a rule on this subject.

In the vegetable garden, Deva and Souleymane share a romantic moment. The young woman’s head is elsewhere, she can’t help but think of the botargues they stole the day before with Jasmine. She confides to him that she is afraid that someone will discover that they stole them, especially Teyssier. Souleymane reassures her, she will find a way to return to the institute. The young woman admits that she wants to stay with him. Her boyfriend is very happy to hear it and would like to shout it from the rooftops. However, Deva wants to keep their relationship a secret. She fears that Clotilde will inform her former guardian and that her parents will find out. For the moment, the student is not ready to tell them that she wants to break off her engagement. Her boyfriend understands: after all, the most important thing is to find a way for her to stay in school.

A little later, Théo has planned bottargues on the double A menu tomorrow and wants to start the preparations. He searches for them at the commissary, but in vain. Antoine confirms that they are nevertheless displayed in the inventory. He will try to find out what happened. Theo is upset, there is not enough time to recommend it and this ingredient is particularly expensive. The principal advises him to find an alternative for the restaurant. Souleymane attended the scene and heard everything.

At the same time, Tom and Ambre are preparing their menu for the Gaissacs. Souleymane calls them in a hurry and orders them to bring the bottargues back to the commissary. Theo noticed their disappearance and his father is investigating this story. If they find out about Deva’s involvement, she can say goodbye to the institute for good. At first, the duo refuses to return them. Indeed, they could be caught when they report them and do not want to take this risk. Tom ends the conversation. Finally, Ambre sides with Souleymane and refuses to create problems for Deva and Jasmine. They inform Diego that they are missing an ingredient for their menu and have to reschedule dinner. Celia’s grandfather is disappointed.

TONY IS IN CALVIÈRES TO FIND SOMEONE

Tony researched his symptoms on the internet, research that confirmed his hypothesis: he had a panic attack. He was strongly affected by the motorbike which nearly knocked him down yesterday. For Gaëtan, there is no doubt that his reaction is linked to his car accident dating from a year and a half ago. He advises her to go see Constance, the nurse at the institute, who has knowledge of trauma. The delivery man accepts his proposal.

While Gaëtan accompanies Tony to see Constance at school, he acts strangely. He looks stressed and looks everywhere around him. Gaëtan finds his behavior suspicious, but Tony reassures him by pretending to try to find the infirmary.

Later, Gaëtan shares his impression with Solal: he finds Tony’s attitude very odd. Suddenly, Tony joins them. He overheard their conversation. He confided to his friends that he was afraid to meet someone he knew at the institute. The delivery man explains to them that this person is part of his past and that she is the reason for his coming to Calvières. However, Tony refuses to reveal his name to them.