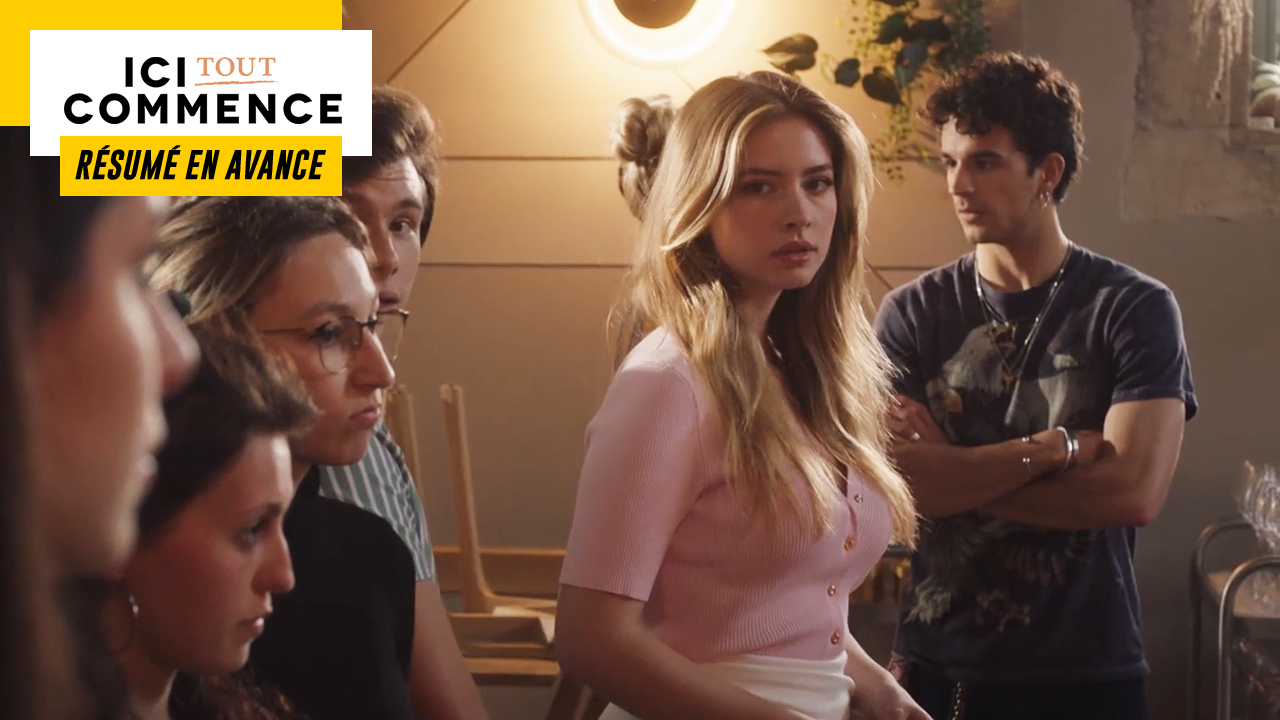 In the next episode of “Here everything begins”… Charlène and Célia are in pairs for the cooking test and Tom and Ambre have a new project. As for Tony, he thinks Axel and Salomé should enjoy life.

Tuesday, June 21 in Here it all starts…

CHARLÈNE AND CÉLIA ARE IN PAIR FOR THE KITCHEN TEST

It is the turn of the second and third years to prepare for their exams. In the kitchen, Hortense, Célia, Greg and Anaïs are training for their cooking test. Hortense does not hide her stress, but her friends reassure her. Suddenly, Charlène joins them and asks them if they haven’t seen her father, which they haven’t. Greg seizes the opportunity and asks her about the subject of their cooking exam. But the student doesn’t know any more than they do since her father refuses to let her take it. If Célia is delighted that Teyssier does not reconsider her decision, Charlène seems to have found a way to pass her diploma despite the decision of the disciplinary council against her. Célia is disappointed, she still hasn’t digested what she did to her with Marta several weeks ago.

At the same time, Emmanuel and Constance spend a complicit moment together at the institute, but they are quickly interrupted by Charlène. Determined to have her sanction lifted, the student found a way to obtain her diploma: article 20 of the school’s internal regulations. Indeed, any student with a general average of at least 10 in the continuous assessment cannot be refused access to the end-of-year exams. According to his daughter, even the director cannot go against the rules, but Emmanuel still refuses to give him a new pass. After all, it’s not just his decision, it’s that of the Disciplinary Board.

Charlene refuses to give up and asks her mother for help. Constance stands up for her husband, and can’t stand her daughter using their relationship crisis to her advantage. For his part, Louis has another idea: to organize a new disciplinary council without informing Teyssier. The student makes her mother promise not to tell her father for the moment. She accepts and warns her daughter, there is very little chance that her plan will work. But Charlène wants more than anything to get her diploma and intends to seize all the opportunities.

Later, Charlène pleads her case with the disciplinary council made up of Myriel, Clotilde, Louis and Rose. The student only asks for one thing: that the rules be applied. They believe that his request is justified. Unfortunately, Teyssier surprises them and once again refuses to reconsider his decision. He thinks it will be perceived as preferential treatment, but Charlene is willing to take the risk. She’d rather have a few reviews and her degree than no degree at all. His father eventually agrees. Constance is very happy for her daughter who managed to find a solution. But Teyssier does not intend to stop there, he is determined to put a spoke in his wheels.

In the kitchen, Célia admits to Hortense and Eliott that she doesn’t want to take the end-of-year exams and is thinking about stopping her studies. When she joined the institute, she thought she was following the teachings of Auguste Armand, not the fads of Teyssier. Somehow, her friends manage to make her change her mind.

Charlène hastens to announce the good news to her brother. Not far away, Celia hears everything and throws spikes at him. She can’t stand that she has so many privileges at the institute on the pretext that she is the director’s daughter. The tone quickly rises between the two young women and Theo intervenes. If they can’t stand each other, they don’t talk to each other. Suddenly, the students’ phones start ringing, Teyssier summons them to the double A.

The second and third years are waiting for the director to find out the terms of their exams. Teyssier arrives and he has a very innovative idea: an inter-promo cooking test. A second year student will team up with a third year student, they will have 24 hours to create a recipe which they will present the day after tomorrow. This test is the only one that the second years will pass. For their part, the third years will continue with a pastry and cooking test the following week. The director announces the pairs: Salomé is with Greg, Mehdi is in duet with Enzo, Anaïs must cook with Eliott and finally, Célia must work with Charlène.

TOM AND AMBER HAVE A NEW PROJECT

Lisandro is destitute at the double A. With the dismissal of half of the promotion of the first years and the other students who will soon take their exams, the room teacher is understaffed in the restaurant. Fortunately, Deva and Jasmine join him: they are normally scheduled in the room schedule. Despite their dismissal, they do not know if they should do the service or not. For his part, Lisandro does not know more than they do, because the director has not given him any indication. The students offer their help, they are very motivated and professional. But Iñesta doesn’t want to give them false hope by letting them work with him. According to the professor, Teyssier will not reconsider his decision. Deva and Jasmine know this, but they’d rather finish their year doing ward service than leave institute on a bad note.

A little later, Lisandro asks Emmanuel and Antoine to let the dismissed first years work indoors until the end of the school year. Indeed, he is understaffed with the second and third year exams fast approaching and has no one else to do this job. Teyssier immediately opposes the project, but Myriel thinks they don’t really have a choice. The manager eventually agrees.

Lisandro summoned the first years sent back to double A. He informed them of Emmanuel and Antoine’s decision. He leaves them the choice: work until the end of the year in the dining room at the restaurant or refuse his offer. The professor confirms to them that if they work for a while at the double A, that does not mean that they will be reinstated. Tom and Amber refuse to work for free knowing that they will not have a second chance at the institute. As for Deva and Jasmine, they accept without hesitation.

For their part, Amber and Tom realize that the institute is really behind them. Tom would like to create a cooking project with his friend that would make them really happy. Immediately, Ambre had an idea: create a table d’hôte at the Gaissacs.

At the Rivière table, Axel and Solal take advantage of the service to revise certain Japanese cutting techniques. Salome arrives at the restaurant. She wants to order her lunch. Solal seizes the opportunity and offers to show them a special technique in exchange for a free meal. If at first the student hesitates, she ends up accepting his offer.

Tony joins them at the restaurant to collect the orders, but nothing is ready. He meets Axel and Salomé and mistakenly thinks they are a couple. In a few days, this is the second time they have been told this. An uneasiness settles between them. Axel then clarifies things, they are not together and Salomé explains that he is in a relationship. While he thought he had a good instinct for these things, Tony takes the opportunity to give them advice: “live your life without having any regrets”.

At the end of the shift, Axel tells Solal that something could have happened with Salomé, but it didn’t. He is in a relationship with Jasmine and laughs a lot with her. But Solal wonders if that’s really enough. Axel jokes, but does not answer him. His look proves that he is touched by his friend’s words.