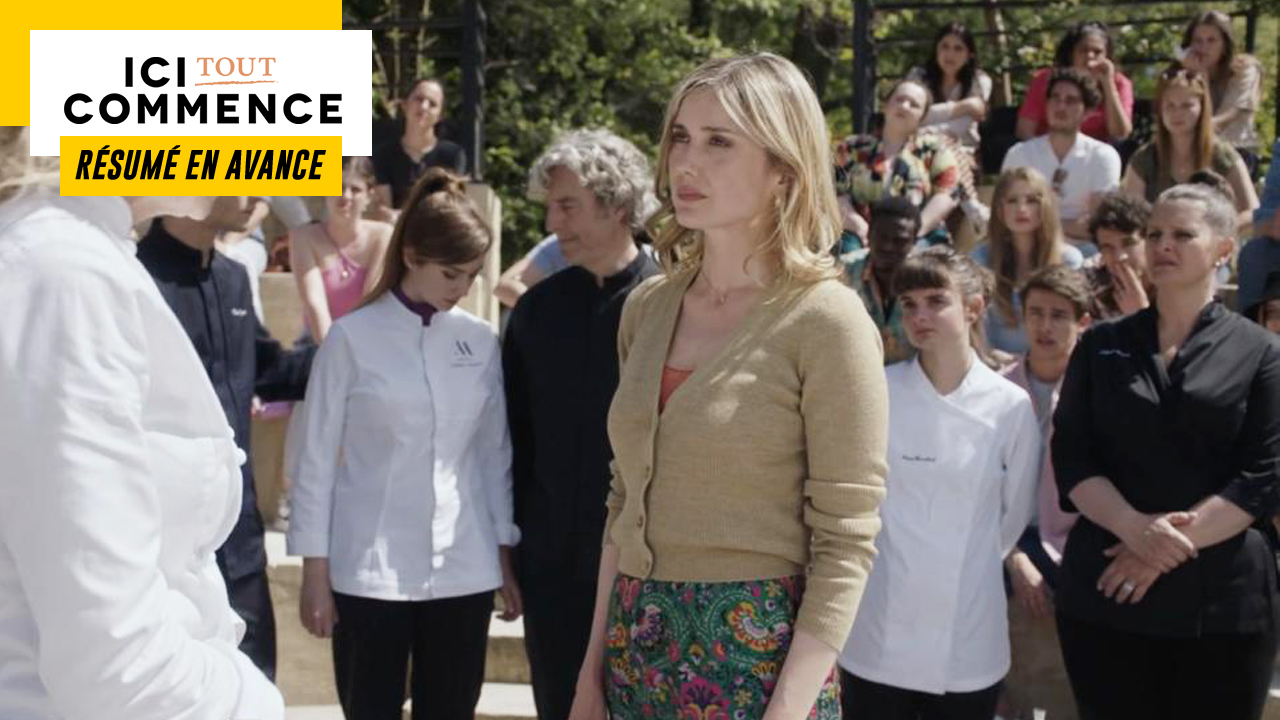 In the next episode of “Here everything begins”… Teyssier wins the regional selections thanks to Constance and Axel becomes Solal’s clerk. As for Laëtitia, she gives Kelly a valuable clue for the exams.

Thursday, June 9 in Here it all starts…

Teyssier wins the regional selections thanks to Constance

Emmanuel Teyssier has understood that the chef Cardone has manipulated him from the start so that he participates in the competition and is humiliated. Cardone’s goal: to leave the institute after being beaten by Landiras and to accept his job offer in London. But Teyssier quickly reassures Antoine: he does not intend to give up his post as director and will fight, not to catch up, but to win the selections.

In the amphitheatre, the second test is about to begin. Chief Cardone begins her speech and very insistently asks if anyone wishes to drop out of the contest. Célia and Mehdi have the feeling that Annabelle’s words are for Chef Teyssier. Emmanuel the sum to continue his speech, because all the leaders intend to participate in the event. As everyone is getting ready to go to the kitchen, Annabelle asks Teyssier what’s got into him and reminds him of their deal. But Emmanuel, always very arrogant, replies that he is not at all interested in his school in London.

Zacharie then challenges Teyssier and provokes him. He takes malicious pleasure in reminding him of his previous defeat and tells his former mentor that he will once again crush him. Zacharie explains to Emmanuel that he knows his recipe like the back of his hand and that he created this dessert thinking of Constance and all the good times they spent together. But Emmanuel is not afraid and assures Landiras that he intends to destroy him in front of everyone.

While the test has already begun, Teyssier decides to change the dessert at the last moment, because he wants to honor Constance. He hopes that with this creation, his wife will understand that he really loves her. Teyssier shows his children his new recipe. Charlène and Théo find that their father has good ideas. However, Theo points out to Emmanuel that his creation is too raw. He suggests a few adjustments, including adding violet flavoring to the ganache. A smell that reminds him a lot of his mother’s perfume.

Later, it was finally time for the final tasting. The jury tastes the creations of the chefs one by one. It’s Landiras’ turn. He presents his dessert, “La ronde des passions”, a name that makes Teyssier laugh. Célia is panicked, but Mehdi reassures her: they have done their best.

Emmanuel is the last to pass. When the students discover his creation, they find it very pretty, but that does not mean that the cake is good. This very special dessert, Teyssier named it “Le Constance”, a vibrant tribute to the woman he loves. After having tasted all the desserts, the jury retires to deliberate. After a few minutes, Chief Cardone announces that Teyssier and Landiras are tied.

To designate a winner, Annabelle asks Constance to decide between the two men, because the desserts are dedicated to her. Surprised, she doesn’t think she is up to such a task, but Zacharie and Emmanuel agree that Constance has the last word. They trust him completely.

Constance then tastes the two creations. It only takes him a few minutes to make his choice. She recalls first of all that her opinion is subjective and that deciding between them is very complicated. However, one dessert seduced her more: that of Teyssier. At this announcement, Chef Cardone and Zacharie are completely devastated.

Jasmine takes Axel to lunch at the Table des Rivières, where the dishes are incredible according to her. Unfortunately, alone in the kitchen today, Solal cannot serve them because his extra left him at the last moment when he had to prepare for an event. Unable to help him because of his courses at the institute, Jasmine however offers Solal to take Axel as a clerk for the day. Solal is reluctant to accept, but Jasmine ends up convincing him by revealing to him that Axel is Chief Teyssier’s nephew and that he will help her for free.

Later, the atmosphere is electric at the Table des Rivières. Solal can’t stand Axel having privileges at the institute on the pretext that he is the director’s nephew. Even if he knows he is lucky to be able to take courses at the institute, Axel wants to reassure him. They will pass the same tests to try to integrate the school at the start of the next school year. Tired of listening to his story, Solal begs Axel to get back to work.

As the service has started and the customers have arrived, Axel shows Solal his mussel dish. Solal immediately notices that his clerk has put white wine instead of a lager in the recipe as he had asked him. Suddenly, a power outage hits the restaurant. The two cooks can do nothing more to catch up. But Axel offers to take a look at the circuit breaker, he thinks he can restore the current.

And indeed, after a few manipulations, Axel managed to repair the power failure. He explains to his boss for a day that his knowledge comes from the fact that he is indeed a “son of”, but a son of a mason, not a great chief. Eventually, Solal realizes he misjudged the apprentice cook and apologizes. And as he thinks about resiting the institute competition at the start of the school year, Axel suggests that they train together, which Solal accepts.

Laëtitia gives Kelly a valuable clue for the exams

Ambre, Kelly, Tom and Deva are in the kitchen, they continue to prepare for the end of year exams. Laëtitia comes to hear from them and Amber admits to her that they are having a lot of trouble reproducing last year’s recipe. As for Kelly, she is frustrated at not being able to cook like the others because of her foot.

While her mother offers to help her with some tasks, Kelly replies that she doesn’t need her. But Tom sees in the presence of Laëtitia a perfect opportunity. He therefore asks her to discreetly inquire about the recipe for the test in order to give them an advantage. Very annoyed, Kelly orders her mother to immediately forget her comrade’s request and not to get into trouble.

In the vegetable garden, Rose and Souleymane meet Deva. Rose offers the young woman to stay, but Souleymane completely ignores her, which pushes Deva to leave. Rose does not understand Souleymane’s behavior and questions him. He then explains to her that he is doing this in the hope that Deva will come back to him. But Rose points out to him that the “Flee me, I’m following you” technique doesn’t always work and that he better accept Deva’s decision about marrying Vikash.

In the Teyssier’s office, Guillaume tries to find the list of ingredients for the end-of-study exam for first-year students, but in vain. It is imperative to order quickly to receive everything on time. Laëtitia offers to help him find her. Quickly, the guard manages to get her hands on the list in a filing cabinet. She gives it to Guillaume while reading aloud its content in order to memorize it.

Kelly continues to revise recipes at home, but she keeps forgetting steps. Laëtitia reassures her, she will pass the exams. To help him, she begins to imitate the duck. Quickly, Kelly understands that the duck will be the main ingredient of the test. She shows herself to be very uplifted towards her mother, whom she had nevertheless asked not to get involved in all this. Laëtitia reassures her: she didn’t snoop because she came across it while helping Guillaume. But nothing helps. Kelly leaves furiously, she refuses to be advantaged compared to her comrades.