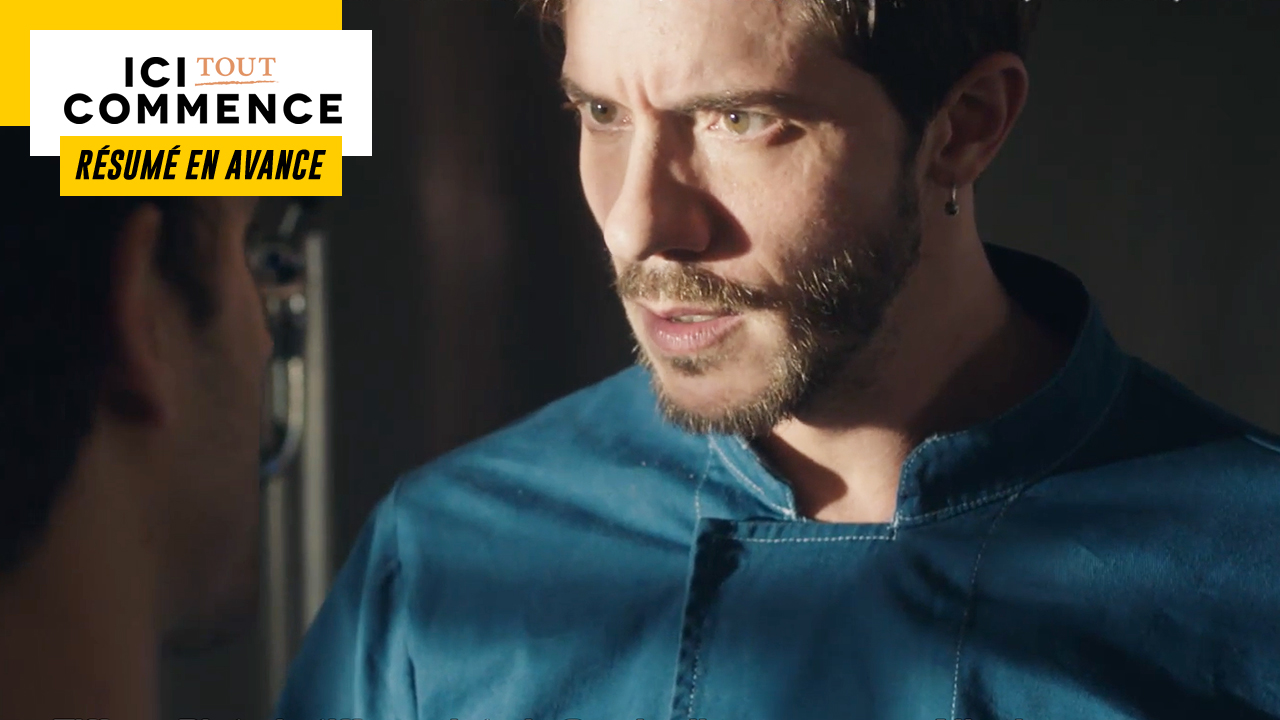 In the next episode of “Here it all begins”… Greg and Ruben are attacked by the crow and Hortense and Mehdi have a week to prove themselves. As for Theo, he is totally on edge.

Monday, August 1 in Here it all starts…

GREG AND RUBEN ARE ATTACKED BY THE CROW

After discovering that Ruben was Alban’s clerk during a previous pastry championship, Enzo and Anaïs went to search his room in search of evidence. If they didn’t find anything that linked him to previous assaults, they came across a taser in one of his drawers. The information only goes round in Greg’s head, who is convinced that the second was going to use it against his father when he was in the pantry during the ordeal. So he decides to go confront him without wasting a second.

Greg attacks Ruben violently. He tries to get him to confess, but Chief Demir’s second in command completely denies his accusations. While the Delobel son is particularly obnoxious with him, the young man tries to remain calm. However, too much provocation leads the two cooks to come to blows. With the situation going way too far, Eliott and Swan separate them.

A little later, Greg thanks Swan for having intervened because without him, he would have made a mistake. If he is not proud of what he has done, he thought he was getting information about Chief Matret or about her intentions, which is not the case. So, Salomé suggests that they go and tell the police everything since there are several of them who can testify against Chief Demir’s deputy. However, Swan points out to them that the young man had to erase all traces that would link him to the attacks and that their fingerprints are now on the taser. If they go to the forces of order, it will be word against word. Then, they receive by message a new threat from the crow: “Continue to meddle in what does not concern you and you will suffer the same fate as Noémie.“There is no longer any doubt that the crow is prowling around.

For his part, Teyssier can’t bear to have come third in the second round. He once again blames Salomé for their defeat and tries to find out what really happened. So, the young woman ends up giving in. She tells him the whole truth, which obviously does not surprise the chef. He knows that Chief Cardone is good at manipulating others and he intends to return the favor.

At the same time, Chef Demir wants the relationship between Ruben and Anaïs to calm down. So he decided to let them work in pairs this afternoon so that they learn to be coordinated. However, the young woman fears being alone with the second since all the evidence incriminates him. As soon as they meet again, Ruben takes it out on Anaïs. He can’t stand being accused like that just because he’s different from other people. Moreover, the young man assures him that he has nothing to do with the disappearance of Chief Matret. Then, when Anaïs points out that he was the only one close to Alban, Ruben freezes. He seems to have figured out who is really hiding behind the crow.

The manipulation of the chef Cardone has affected Salomé a lot. So, the young woman thinks it’s best to take a break from her relationship with Swan until the end of the competition. For his part, the second regrets that they have not been able to find a less radical solution, but he understands his decision.

At the end of the day, Ruben discovered the identity of the mysterious crow. He tries to call Greg but to no avail. So, he ends up leaving a message on his answering machine asking him to join him in his room as soon as possible. Suddenly, the young man hears strange noises. Trying to grab his taser, he realizes the group stole it from him. When he opens his bathroom door, he is knocked unconscious by someone.

After receiving Ruben’s message, Greg rushes to his room. During this time, an individual dressed in black pulls the body of Ruben which he installed in a sheet. When he hears someone coming, the crow manages to hide. So he in turn knocks out the Delobel son without him being able to warn his friends of the situation.

HORTENSE AND MEHDI HAVE ONE WEEK TO PROVE THEMSELVES

Thunderbolt at the Pop-Up! Many customers have left negative opinions on the ephemeral restaurant, which deeply hurts Hortense and Mehdi. However, the chef quickly realizes that something is wrong. So far, they had never received any comments and now they are receiving an avalanche of bad comments? The situation is very strange, especially since they were all posted at practically the same time. So, they end up understanding that it is about a vicious idea of ​​Charlène to recover the restaurant.

A little later, Louis puts his plan into action to obtain the direction of the Pop-Up. Indeed, the many negative opinions about Hortense and Mehdi’s menu are, according to him, proof that they are not able to take care of the restaurant. So he decides to say a word about it to his sister who supervises him. However, Clotilde quickly understands her intentions and refuses to grant her request.

Clotilde comes to clarify things with Hortense and Mehdi. Based on recent reviews, their menu is not working with customers at all. However, the couple stops him right away, they are convinced that it is a low blow orchestrated by Charlene and Louis to recover the Pop-Up. Even if their accusation is true, the poor numbers of the ephemeral restaurant call into question their ability to take care of it. So, chef Armand decides to give them a week to prove themselves. In the distance, Charlène is delighted to see them at the foot of the wall.

At the end of the day, Louis and Charlène are delighted to see their number of subscribers soar. Finally, the young woman is delighted to have taken photos with her boyfriend despite his apprehension. Besides, she wants their last shot to be on their wedding invitation. Louis does not hide his astonishment since his girlfriend wanted to wait before taking this step. So, the student proposes to him to get engaged at first to concretize their relationship. However, the young man does not jump for joy as she expected and claims to want to focus on the Pop-Up first.

THEO IS TOTALLY ON EDGE

After many attempts, Théo finally seems satisfied with his modern and light reinterpretation of chef Armand’s roast turbot. However, the taste of the accompanying orange and ginger emulsion is not perfect. He then asks Tom and Amber to start over despite the lunch service which is fast approaching.

During the service, Ambre announces to the chef that his turbot sushi revisit is a great success with customers. Besides, she has six new orders. However, Iniesta has news that could upset Theo’s good mood: a restaurant regular wants to see him without delay.

The client hated the chef’s revisit. He expected to find the flavors of the original dish but this is not the case at all. Moreover, he considers that the plate is completely missed. So, Theo offers to offer him a dessert to compensate for his disappointment.

At the end of the day, Theo is very affected by the return of the client. He worked all afternoon on the turbot sushi but is finally considering removing the dish from the menu. Moreover, he confides to his mother that he does not feel up to it. But Constance refuses to hear him say such a thing and assures him that he has become a great leader.