Who asks to bring SOMEONE ELSE on vacation when they’ve been invited by someone else?

That is just bizarre…

But that’s just my opinion.

Now it’s up to you to read the story below and see if you think this guy was out of line for not letting his guest bring a guest on vacation.

“My wife and I have had a pretty nice beach vacation planned out for about a year now.

The house we rented is overkill for two people to say the least, so she got the idea of inviting a few people we trust to come down with us at no cost. She figured it’s going to cost us the same regardless, so it’d be cool if a few people who couldn’t normally spring for such a trip would be able enjoy it too.

One of our invited guests has met some dude online and wants him to come hang out, to which my wife and I instantly said no. Nothing personal, we don’t know him, she doesn’t know him, and this place was f**king expensive.

He might be cool, but he might suck, and we don’t want to take the risk of allowing it. The last thing we need is some random stranger doing something stupid and leaving us on the hook for it, or even worse, causing a bunch of trouble for everybody.

So he’s not staying in my house, I’ve made that abundantly clear, but now the idea is he’ll drive down and stay somewhere else. Our friend wants to stay with us still, but plans to come and go as they please to hang out with the random guy nobody knows.

So basically we thought enough of someone to let them tag along free of charge on this awesome trip, but it kinda feels like we’re being taken advantage of now.

Anyway, am I the a**hole here? The whole thing kinda rubbed me the wrong way, but maybe I’m off base.”

This person said they should uninvite her for doing this. 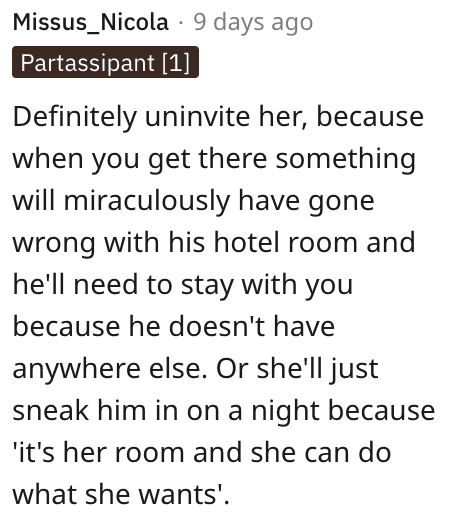 Another individual asked a good question: who the hell does this?!?! 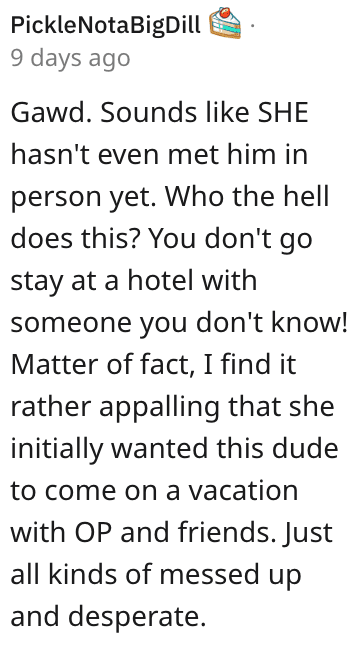 And this Reddit user said he’s NTA and that if he’s paying, he can make the rules. 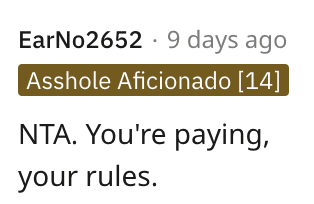