He Won’t Let His Best Friend Get Married on His Property. Is He a Jerk?

As you already know, when people get uninvited from weddings there are going to be some seriously hurt feelings.

And what happens when the person who was uninvited was supposed to host the whole shebang?

It’s only meant to be a small backyard type of wedding but they’ve been planning it for a few months now and originally it was supposed to be on my property. They wanted it because it’s private, has lots of open space for the reception, a nice view and the house could be used for them to get ready and stuff.

Of course I said yes, she and her fiancé “Rick” were very happy. Thing is Carla and I do have a history. We went out on & off in college but decided to stay friends. Then I met my wife, we got married, Carla met Rick and now here they are.

Now my wife knows I went out with Carla back in college and she didn’t care. Carla still went to our wedding and everything. I never knew if Rick was told or not, it’s not my relationship therefore not my business to say anything so I never did. Rick found out recently and not in the best way.

Not sure how but from what I heard from friends is that one mutual friend told him (no idea why) we used to date. Not only that but apparently Carla said a couple years ago she was still in love with me when she was already dating Rick.

Don’t have actual confirmation if that’s exactly what he was told. All Carla’s told me is that Rick was told about our past and he’s angry at her for never saying anything.

It became quite a drama and didn’t hear from her for over a month until now. She told me they’re going to couples counseling and that the wedding is still on. But Rick requested that I not attend. It sucks but I totally get why he wouldn’t be comfortable. Then I asked the obvious question, where are they going to hold the wedding then? To my surprise she said they still want it at our place.

Rick said so to and in my mind I’m going “he doesn’t want the guy who dated his fiancée years ago at the wedding, but still wants the wedding at his house.”

My wife and I are expected to just…not be at our home that weekend, And I told Carla no. They’re going to have to find some place else since we’re not going to simply leave our home to them for the weekend. Not only for safety reasons but it just doesn’t make sense.

Honestly don’t think that I am, it just doesn’t make sense at all to have to leave our own place for a wedding we’re no longer welcome to and leaving our home totally vulnerable. Still, being accused of sabotaging their wedding and Rick believes it’s the least I can do after everything.

One reader said he’s NTA and that this Rick character put his bride-to-be in a tough situation. 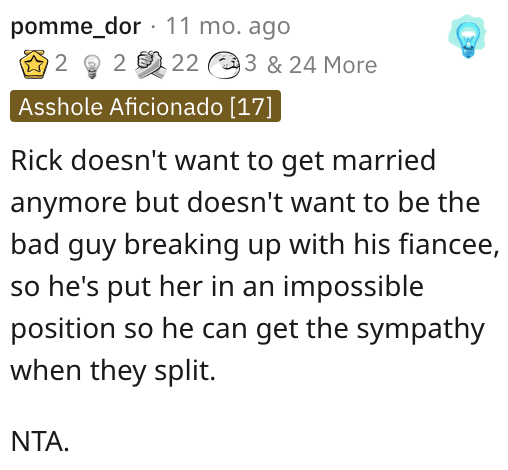 Another Redditor agreed and said that Rick seems petty and passive aggressive. 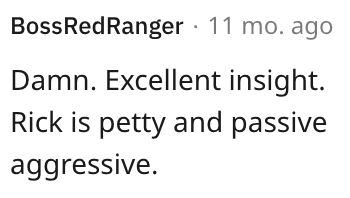 And this individual said there were a lot of people in her wedding party who she’d been with, so what’s the big deal? 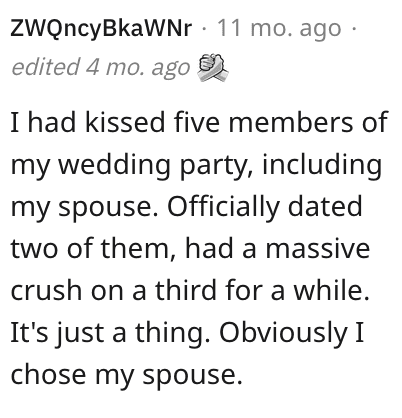