He Wants to Be Called “Doctor” by His BF’s Father. Is He Wrong?

Hey, in my opinion, anyone who has earned a doctorate degree can be called a doctor if that’s what they want.

But, as you know, people can be picky about this kind of stuff…

Check out this story from Reddit’s “Am I the A**hole?” page and we hope you tell us what you think in the comments!

“I (27M) have been dating my boyfriend (26M) for about 3 years now, and have known his family for a little under that.

His father is a doctor and when we met for the first time asked me to call him Doctor XYZ, for those wondering. I didn’t think it was all that relevant, which is why I wasn’t specific.) Personally, I think this is weird as hell, especially since he still insist on it despite me having known him for well over 2 years now.

That being said my boyfriend assured me it’s just a matter of respect for him because that is his professional title and that I shouldn’t think anything of it (he calls his father dad/by his first name, but has told me that in the past his dad sometimes asked to be called doctor similar to how some want to be called ‘sir.’)

I just recently finished my PhD and now am officially a doctor, too. Like I said I don’t put too much stock into professional titles, but it is cool to finally be done with it and I have been bragging recently, just cause it’s such a big achievement for me.

When meeting up with my boyfriend’s family I told everyone that I had finished my degree and they all congratulated me, including my boyfriend’s dad who told me “Congrats, OP, but don’t expect me to start calling you doctor.” I wasn’t really expecting him to do that to be honest, but the way he said it really struck me so I replied “Why not? I’ve given you the professional courtesy.” To which he said “that’s not the same.”

At this point I’m really confused because I didn’t mean for this to turn into an actual argument, but I’m just really confused by the sudden shift attitude. I respond by saying “I don’t really see how it’s different. I never understood why I should address you as doctor to be honest, and was always told it was a matter of professional courtesy. Now I’d like the same courtesy back or I’m not gonna give it to you anymore.”

The argument just sort of went in circles from there until I eventually said “Whatever. I’m just not gonna respond to you calling me by my first name anymore.” And did that consequently for the rest of the night. When my boyfriend and I got back home he got mad at me for trying to one up his dad and causing a fight.

I do feel like I could’ve dropped it, like I said I don’t really care about being called doctor, but at the same time I feel like his dad’s behavior was complete bulls**t.”

This person said he’s NTA and he should stand his ground. 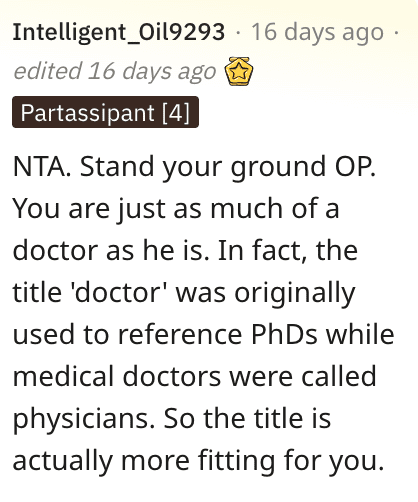 One individual had a different take and said people need to forget about titles altogether. 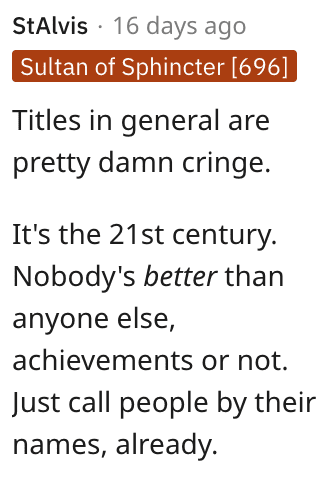