Hmmm, this sounds like a pretty tricky story from Reddit’s “Am I the A**hole?” page…

Was this guy right?

Take a look and see for yourself…

“So my wife has a friend from childhood named “Anthony”. I’m being completely honest here when I say that he and I don’t get along.

It’s not like he is rude or disrespectful (nothing like that) but all I feel towards him is “annoyance” sort of speak because of how much my wife sees him. He lives alone and now suffers from a medical condition (Cancer) that requires him to go to the hospital regularly to receive treatment.

I found out that my wife promised him to go with him to his every chemo treatment as support. She said it’s a commitment she made to be there for him during this rough time since he has no one else besides him.

Okay…..I had no issue with that at first but then this started affecting me. e.g, I can’t go see my friends because I have to stay with my son on X day so my wife could be with Anthony for his treatment etc etc. I’ve talked to her about it but she said that Anthony needs company and that she’s just being supportive and this is when he needs her the most.

I let it go but last week was just kind of my last straw. Anthony had a other chemo session treatment and my wife wanted to go with him and asked me to stay home with our son. I told her I had a meet up with my mom and sister to eat lunch and that I won’t be home, She said she needed to go be with him and I kind of flipped out at her and said that she doesn’t “need” to be with him and could literally go see him at home the next day or something.

She threw a fit and called me cruel for forcing her to leave Anthony by himself since she’s all he has and that I was making her look bad. She also said my appointment with mom and sister wasn’t as important as a chemo session but I decided to just leave to end the argument.

She ended up staying at home but kept ignoring me when I got back calling me selfish for not letting her be there to support Anthony with what he’s going through. Some of her girlfriends think I’m being a controlling jerk with no consideration for Anthony and what’s he’s going through.

One reader said this guy is an a**hole.

And this reader said it’s clear that his wife’s friend really needs her support. 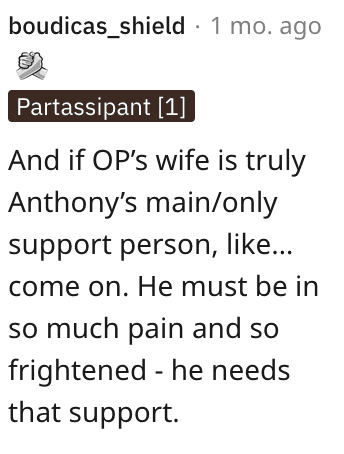 Another individual brought up a good point about this situation… 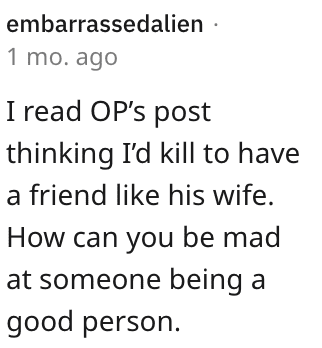