He Told His Parents He’s Not Interested in Their Drama and They’re Not Allowed to Talk to His Fiancée. Is He Wrong?

I really feel sorry for people who have to deal with drama from their parents.

Check out this story and let us know if you think this guy was out of line for what he said to his parents.

“My fiancé (32F) and myself (35M) have been together for nearly 5 years. My fiancé is currently 26 weeks pregnant with our little boy.

I love both these girls with my whole heart, I would do literally anything for them. We are going to get married in about a month (5 year anniversary). We are currently in the process of me adopting 7F and adding my name to the guardianship of 5F. Due to the legal issues surrounding 5Fs case, we can’t legally change her last name.

Fiancé and I talked and I suggested that the simplest answer was for me to change my last name to the same as my fiancé. I don’t want to double barrel my last name as I feel that this defeats the whole point. I want us all to share the same last name. This also means when baby boy is born he will be given my fiancés (by then mine as well) last name.

My parents have always been in my opinion obsessed with ‘carrying on our family name’. I knew this decision would upset them. I know it’s harsh but my little ones mean more to me than my parents obsession.

I had a sit down talk with them, mum was crying, dad was angry. Neither understand my decision. They want us to change both girls names to my current last name. Apparently that was the obvious decision. Changing my name will obviously bring shame on our family, ‘what will people think’, I’ll make my parents fodder for gossip.

My fiancé did suggest using my current last name as baby boys first name. I didn’t even suggest this to my parents. My last name is alright but would be a god awful first name. I’m not doing that to our son.

My mum was demanding I talk sense into my fiancé. Our conversation ended with me telling them I’m not interested in their tears, drama, or their opinion, and I won’t allow them to talk to my fiancé until they are less emotional. She’s nearly 6 months pregnant, the last thing she needs is my parents shouting at her for a decision I made.

AITA for how I spoke to my parents? AITA for changing my last name that means so much to them?”

This reader said this guy is definitely NTA and that his family sounds like they’re stuck in the past. 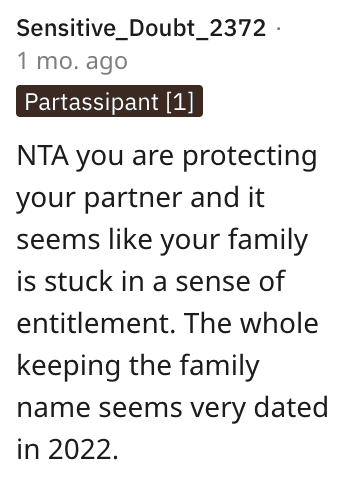 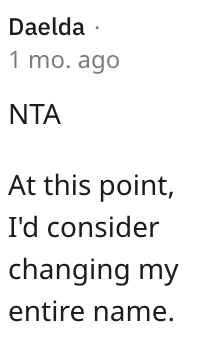 And this individual said this guy is only being one thing: RATIONAL. 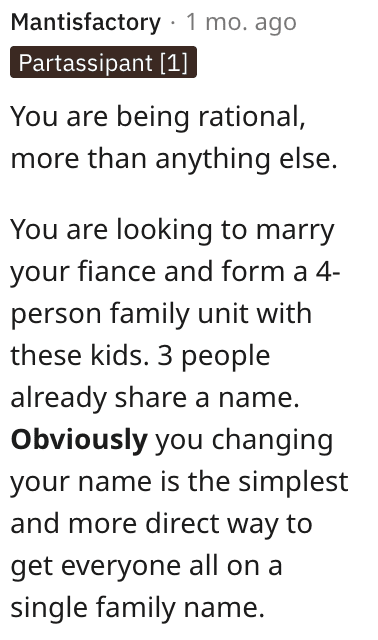