Is that the most stereotypical Italian-American thing you’ve ever heard?

But I’m just having a little bit of fun, ya know?

Just like this guy who gave his girlfriend’s rude family the business.

Take a look at this story and let us know if you think this guy acted like a jerk.

“Backstory: due to my dad’s job we lived in Italy for 3 years when I was younger, so I speak Italian almost fluently (it’s been awhile, so I’ve lost some of it)

Recently I started dating a girl. She’s great and I love her so much. I met her family a few nights ago for dinner. She warned me that the male side of her family is very big into being macho, into “testing” the boys the women date and are VERY big on taking pride in their Italian ancestry. I think besides the grandfather, however, they were almost all born in Bergen County, NJ but whatever, its nice to take pride in one’s heritage.

Long story short at dinner they kept making jokes at my expense (I honestly would not call it bullying, just things about my height, beard, shaved head). They tried making fun of my IT job too but stopped once I told them my income. It was overall not a bad experience, but a not so pleasant one.

Anyways, her older brother kept pushing things, giving me exceptional amounts of s**t for playing Lacrosse in HS (apparently its a sport for prissy rich kids and not manly like football or baseball). He ended his rant by saying “hey, we’re just a big Italian family, we’re loud and tell it how we see it! Hahaha!” and all the family except my girlfriend laughed. So I, for the next minute, responded to everything they said in Italian.

My girlfriend buried her head in shame, the grandfather laughed and everyone else kept looking at each other confused before telling me they didn’t speak Italian. I replied “then don’t use your Italian heritage as an excuse to behave poorly when you can’t even speak the language.” They got mad, but the grandfather told them all I was right and to be quiet.

My girlfriend isn’t mad, just ashamed, I think the grandfather likes me, but word from my gf’s sister is that all the men are furious, think I’m a smart a** and that I disrespected them and their masculinity in an unforgivable way.

This person said he’s NTA and that the grandfather knows what’s up! 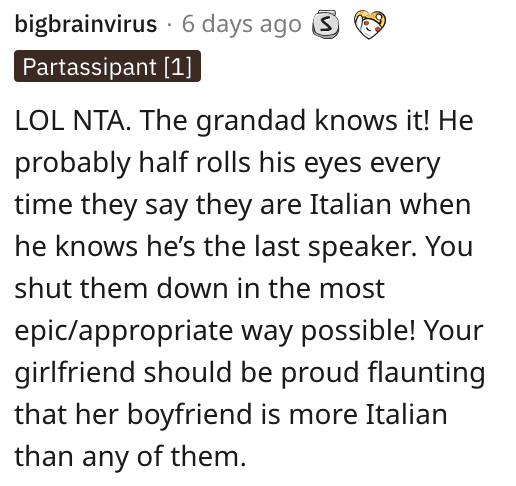 Another reader said this was not insulting. 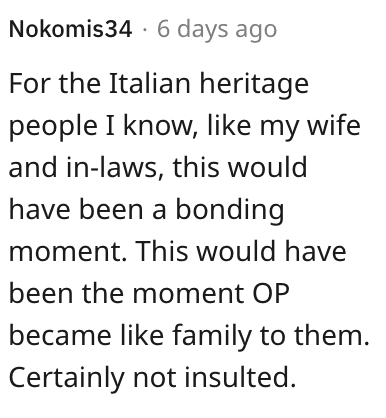 And this individual also said he’s NTA and that this was about respect. 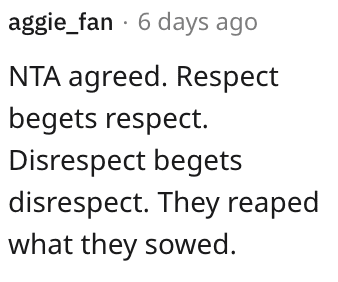