He Said His Stepkids Aren’t More Important Than His Daughter. Did He Go Too Far?

Blended families can present some interesting issues from time to time.

Will the kids get along?

The possibilities are endless.

“I was a widower when I met my wife 4 years ago. She was a divorced mom of two. I had a daughter also.

The three girls are 13 and 11 (my stepdaughters) and 12 (my daughter). My wife’s ex was kind of an issue when we met, but it was easy not to expose my daughter to him, so I felt secure in moving forward. My daughter really liked my wife and was excited to maybe have siblings. My stepdaughters were fine with my daughter at first. Of course they didn’t just call her sister magically or treat her the same right away but they were nice.

That all changed within a month of my wife and I getting married 2 years ago. The girls dad h**es my daughter and they (the girls) will spew that h**e in our home, and will use it to bully my daughter. A grown man called my 10 year old a fat repulsive pig, a w**re and the reason abortion was invented (to list only a few).

The girls have called her dumb, they have mocked her for being shy and introverted. I made it clear that could not continue if we were to stay married and my wife was determined she would get them to stop. I got my daughter therapy and I did as much as I could to keep them separate. But even at night they started to taunt her.

So I made the decision to move out with my daughter and I told my wife our marriage could not continue. She begged me to stay. She said she loves us and her girls need me. I said my daughter comes first.

Ever since I filed for the divorce my wife’s family have been telling me how much my stepdaughters need me, how badly they need to see a healthy and good father figure in their lives, and that I will destroy them if I leave. How they’re important and I need to prioritize them.

I told them they are not more important than my daughter. Outrage ensued and I was asked how I could say that. They said my wife was prioritizing my daughter and being loved by her should be enough for her to understand her sisters need me to stay in their lives.

And I am an a**hole for saying their granddaughters are not special. I told them that isn’t what I said. But they said I dismissed two young girls and made it sound like they weren’t worth fighting for.

Now take a look at how Reddit users reacted.

This person said he’s NTA and that they’re baffled by the in-laws’ behavior. 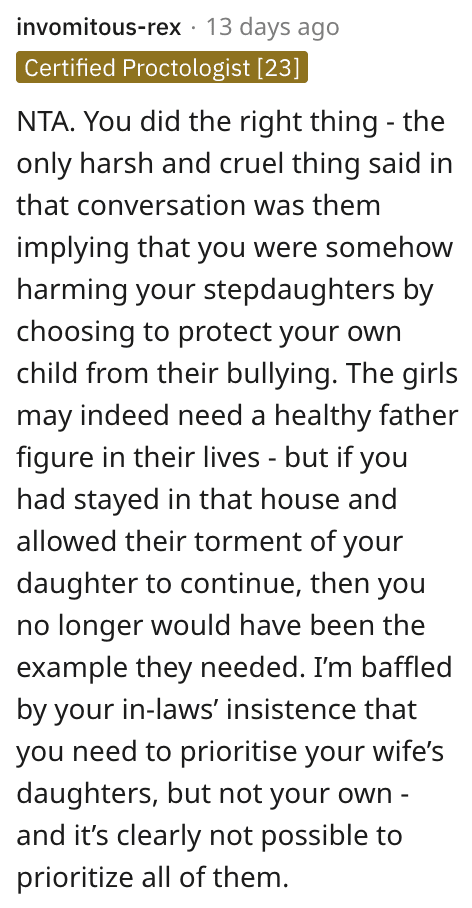 And this Reddit user agreed and said he’s protecting his daughter from these people. 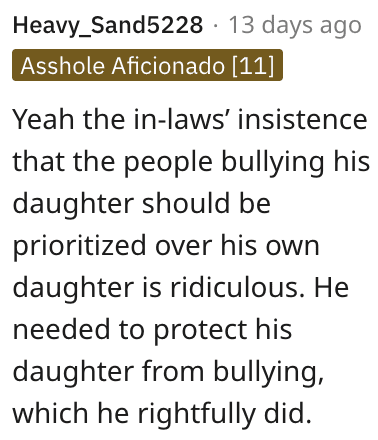 Another individual added that his wife needs to get her ex in check. Boom! 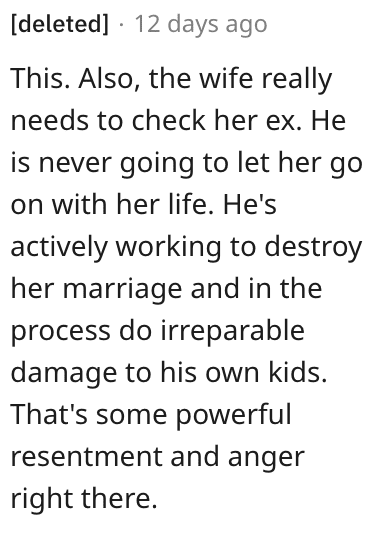 Sound off in the comments.