He Left an Evening With His Girlfriend to Help His Ex. Was He Wrong?

When do the bonds with an ex really break?

Every situation is different and there are some things that keep bringing you back…and in this case, it’s a dog.

Check out this story and see if you think this guy acted like an a**hole for dropping everything to go help his ex.

1 year before our break up we adopted a dog « bean ». I am no going to lie we were the kind of crazy pet owners, he was like our kid. Our break up was mutual and at the end we were more friends/roommates than a couple. The hardest part was figuring out what to do with Bean. We both wanted to keep him in our lives so we decided in an arrangement to please both of us.

She has the bigger garden and she often work at home so she has him most of the time. I often go on hikes on the week end and she has to travel for work once a month so I have him at least a week each month and on the week ends.

I have the code to the gate of her garden so when it’s my turn I just go and get him. Her brother is one of my closest friend and I hike with him so during the week end he is the one getting him.

If we talk it’s mostly to give small update about our families (we know each other since we were 15) and the dog.

I know this arrangement is unusual but Bean is our dog and right now both of us can’t imagine not having him in our life.

6 months ago I met Ana (25F), she is now my GF. She never complained or said anything about how things work with Bean.

This Monday Ana came ove to mine. It was just a casual evening/night together. Around 10 my ex called me in tears. A neighbour came in the afternoon to deliver something and she forgot to close the gate. When my ex came back Bean was missing.

She told me that her and her BF looked around but couldn’t find him and they were going to call more people to search for him. I told her that I was comming. I asked Ana if she wanted to come but she refused. When I arrived at my ex’s place a few people were here to help. Her bf, her brother, the neighbour and her family and some of our friends.

Anyway it took us over 1h but we finally found him. He was fine. We took him home I gave him a lot of hugs, said bye and left. I came home and Ana was already in bed. When I tried to talk to her she told me that she was tired and didn’t want to talk.

The next day she was cold and barely talked to me but after work she called me to talk and kind of exploded on the phone. She said that I left her to go with my ex and that she was hurt. That I chose to spent the night with my ex and our friends rather than with her. I tried to explain that I only went because of Bean but she refused to listen to me.

According to her there were enough people to find Bean and my ex didn’t need my help. Which is true but he is still my dog and it’s my job to be here for him. Even our friends came to help.

I want to add this is the only time that something like that happened since we broke up.

Honestly I don’t know what to think. In my mind I did the right thing but Ana said that I neglected her.

My friends don’t get along well with her so if I ask them they will be biased.”

One reader said he’s NTA and this is what you should do if your dog is lost. 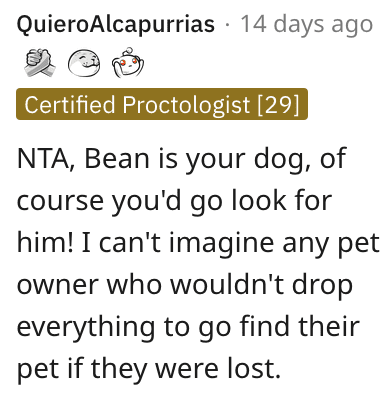 And this individual agreed and said his GF sounds very selfish.

And this individual also said he’s NTA and that this current GF doesn’t sound like a keeper. 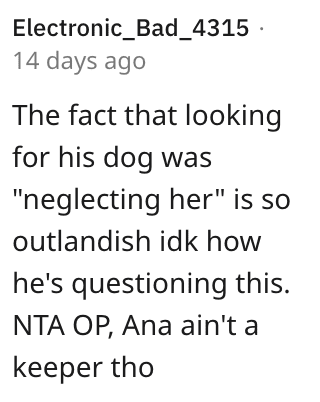