He Kicked His Friend Out of His Bedroom So His Wife Could Take a Nap. Was He Wrong?

I’m just gonna come out and say it…

This is a weird one!

But that’s how the stories on Reddit’s “Am I the A**hole?” page get from time to time!

Take a look at what happened in this one!

“So, I 28M have a wife 27F who works full time as a CNA while she is in school to become a an autopsy technician. She works a LOT.

She is constantly picking up extra shifts working doubles and even triples. She does all that on top of going to school full time. Because of that she often takes a nap after work. Well yesterday, I had a friend over who I will call E. My wife and E do not get along as E makes her uncomfortable but she and I don’t prevent one and other from seeing friends just because one of us doesn’t like the others friend.

E was over at mine and my wife’s house playing video games when my wife calls to tell me she’s on her way home from work. She sounds exhausted and I asked her if she felt ok to drive and if not I’d come pick her up from work and go back together the car later. She says she’s fine to drive and that she’ll see me later. I said ok and told her I loved her. E and I go back to playing video games.

It is worth mentioning that the only tv my wife and I have is in our bedroom. I was laying on the bed playing And E was sitting in my desk chair. About 15 minutes or so later I hear my wife come in the house and call out to let me know she was home. I come into the living room and give her a kiss. She all but collapses into my arms exhausted to the point she couldn’t even walk to the bedroom.

I ask her if she’s ok and she says is yea just a long day at work. I really need a nap. I nodded and told her to come lay down in the bed. When we get to the bedroom I politely tell E that he needed to leave as my wife was exhausted and we could play later that night. E asks why he needs to leave and why my wife can’t just sleep while he and I keep playing. I explained that it was just a game and that my wife and her needs came first.

E then asks why my wife couldn’t just take a nap on our living room couch. I told him I wasn’t making her sleep on the sofa just because he wanted to keep playing. E gets pi**ed and slammed his controller down on the dresser and goes to leave. Before he does, he turns to my wife and tells her I’ll bet your happy he always feels like he has to pick you over anyone else. He leaves and slams the door on the way out.

My wife turns to me and starts to apologize saying she could have just slept on the couch. I tell her no she couldn’t have and tell her to get some rest. Later that night my other friends are blowing up my phone saying things along the lines of bros before hoes and saying it was rude to kick e out just so my wife could sleep.

All of my married friends however are on my side saying my wife’s needs come first before my friends. E is now saying he won’t speak to me until I apologize.

Let’s see how Reddit users reacted to this story.

One reader said this guy is NTA but they need to get better friends. 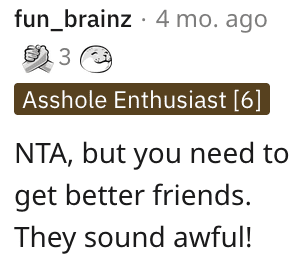 Another Reddit user also said he’s NTA and that he did the right thing by supporting his wife. 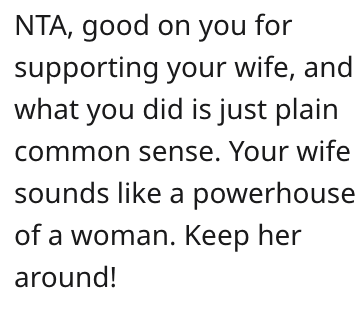 And this individual said this is all about common decency and it sounds like none of his friends know anything about good relationships with women. 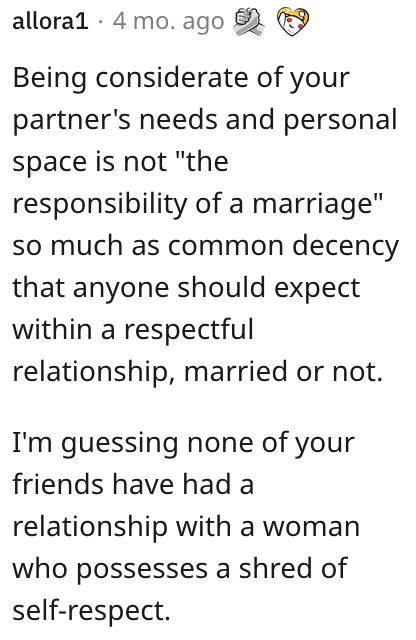