Well, this is a strange one…

But that’s what you get sometimes with stories from Reddit’s “Am I the A**hole?” page.

Take a look at this story and see if you think this guy was out of line.

“I know the title sounds bad but hear me out.

My wife (29f) had a strange preference in water. She always drinks unflavored seltzer water, but instead of just drinking it normally she opens the cans first and then waits for all the bubbles to fizz out before drinking any of them. It’s just such a waste since she’s essentially drinking regular water at this point but for such a higher price. My wife always argues that it just tastes fresher and crisper after being left out opened.

I normally do the grocery shopping and last week when I went i did not but any seltzer. When I got home my wife asked where the seltzer was (she had added it to the shopping list). When I explained that I hadn’t bought any she immediately went red in the face but didn’t really say anything.

Later that day, I went to the gym and when I got back, our kitchen was decked out with seltzer cans. I could barely open the pantry because there were so many packs of seltzer (there were at least 25 boxes worth). My wife smugly told me that she had taken several trips to the grocery store because 1 trip wasn’t enough to fit all the seltzer in her car now that she knew I was trying to cut her off.

She told her family about this and they are all calling me an a**hole saying I’m depriving my wife of a basic need.”

Check out what Reddit users had to say about this.

One person said everyone in this story sucks and that they just need to buy a Sodastream. 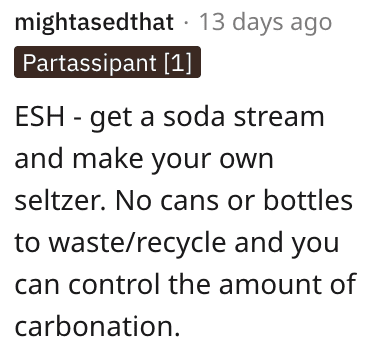 Another reader said this guy just needs to let his wife enjoy things.

And this individual also said everyone in this story sucks and they should just resolve this by buying a Soda Stream. 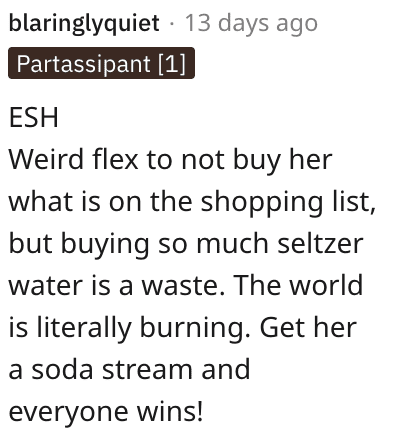