Guy Screams at His Parents in Public Because They Hid A Massive Secret. Was He Wrong?

I think it’s usually a good idea to try to keep screaming and yelling private, but I guess sometimes people just need to be called out in public…even if it’s your parents.

Read this story from the “Am I the A**hole?” page on Reddit and let us know if you think this guy was out of line.

What happened is in our senior year of HS her mom passed away. She didn’t have other family in the US the only other family she had was her dad in Mexico. We wanted to move in together but neither of us had the money to support ourselves. And my parents didn’t want her staying with us even if she got a job to help out so she went with her dad.

They messed with our communication tho because when she reached out to say she’s pregnant right after she left my parents sent her a message pretending to be me saying I wasn’t going to be involved so don’t bother me again. To me when she never contacted me again I thought she ghosted me which hurt.

That s**t was pretty devastating for me to find out. Lucy came back to my life with my son to confront me for abandoning them. I was crying so much after learning the whole truth. That same day I had nothing to do with them because they were d**d to me. My mom thought they did right because I would’ve ruined my life for her and our kid

It disgusted me. Since it’s been 2 years my parents have had a change of heart. Every so often they try to have my sister bring gifts to my son that’s from them. It started happening even more after my uncle passed away last year. They tried talking to me at the funeral but I ignored them. Now they say it helped them realize family is important so they want to meet John.

We went to the mall for a family portrait on Saturday then my sister met with us to eat across the street. My sister starts freaking out then she shows me a text from my parents. They were asking her if she’s coming over then she said after meeting with me because we came to eat at “___”. All of a sudden they were like “ oh we’ll join you guys!” Like if nothing they did ever happened.

She texted them not to come but they caught us when we were already leaving. I told my gf to take John to the car and right there outside I let them have it. When they were tryna say sorry to me I yelled at them that they stole my son from me and made my girlfriend a single mom for 2 yrs.

In front of all these ppl. And I know too that the yelling was super loud because even my voice was cracking. They didn’t say s**t after that but my mom was for sure crying and my sister was right there.

My sister tells me maybe I should apologize for that because they were humiliated being yelled at in front of a bunch of strangers. My mom even told her sister yesterday that they get they were very wrong for what they did but the way I screamed at them was an extreme reaction since they were trying to talk in a calm voice. That is the first time I’ve ever yelled at them like that too.

It hard not to see past being angry at them. And for this kind of thing it was hard not to lose it. Regardless does that make me an a**hole?”

This person said this guy is NTA and that his parents could have ruined his relationship with his child. 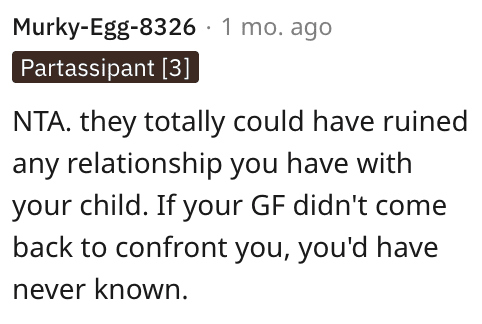 Another Reddit user said this guy did nothing wrong and that his parents deserved it. 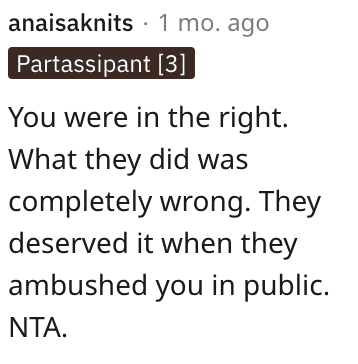 And this person pointed out how ridiculous the parents are acting in this situation. 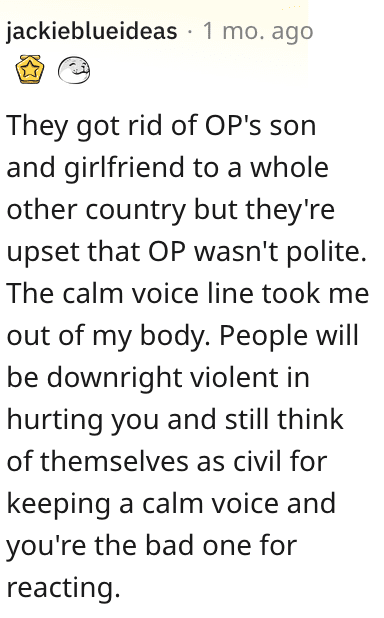