Without reading any more of this post, you can probably guess that the “higher salary” part of this headline is what really got OP’s (original poster) panties in a twist.

There seems to be a certain kind of man who just can’t handle the idea of his female partner making more money than he does, regardless of their industries or how hard she works – and in the case of this dude, he’s decided that since, to his mind, she doesn’t work as hard as he does, she really shouldn’t be making so much money.

My girlfriend and I both work in tech, she’s a safety validator for software, working at a consulting firm, and I’m doing network infrastructure support.

When we both worked in different offices I didn’t know much about her day to day life at work.

I knew she made a lot more than me, 120k to my 66k, and she credits a lot of that to job hopping, she’s 25 and has had three full time jobs since college. I’ve been at one place since college.

But since we’ve been working from home, I’ve seen a lot of her daily schedule. And hers versus mine are really different.

Now that they’re working from home, he sees that she gets to sleep in before a meeting, works off and on the rest of the day while also taking care of herself and the house.

After the meeting she goes and showers and has breakfast from about 10 to 10:45, answering a few slack messages and emails on her phone but mostly just listening to podcasts and eating and doing her morning routine.

Then she works till noon, and takes a lunch break from noon till 1. Then she works from 1 to 4, often having meetings or working on her own stuff. And at 4 will spend an hour or so doing household chores and stuff while keeping an eye on her phone to answer emails.

And outside of 9 to 5 she blocks work related messages from her phone.

Reader, he called her a slacker.

So basically she actually works about 4 and a half hours daily, and does her own thing for about 2 hours, just paying enough attention to reply to emails that come in.

I basically work nonstop 8:30 to 5 or 6 pm, working 8.5 to 9.5 hours a day. I don’t take breaks in the workday to shower or eat breakfast and lunch or do household chores.

And a few weeks ago I got kinda frustrated with her for basically hardly doing anything for her job at all. And that they were overpaying her if she was spending half the day slacking.

She got frustrated and basically told him it was none of his business how many hours she works a day – her bosses are happy with her output and contributions and are the ones paying her salary.

And that she picked her job instead of one that might pay better because she wanted a good work life balance, she was sick of wasting her life away at work that was a lot more demanding.

He just kept at it, though, because *whines* how could this possibly be FAIR?

AITA for what I said about my girlfriend’s work ethic?

Is this guy the a$shole?

I think we all know the answer to that, but here are some comments just to make us all feel vindicated. 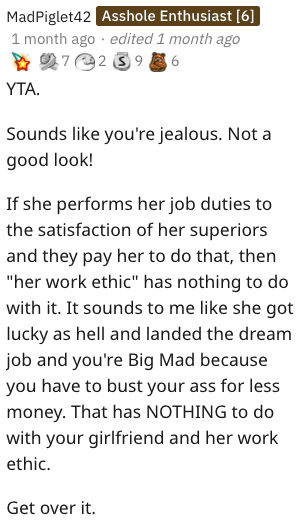 Yes! Be happy that your team is making more money and your partner was happy! 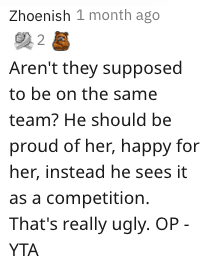 More than one person pointed out that his girlfriend was pretty nice about the whole thing- nicer than she had to be, for sure.

It’s true that working from home has made people more efficient and not less.

He should just be living the good life. 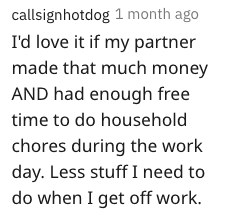 This guy sucks and I hope he either gets his act together or his girlfriend moves on to someone who won’t make her feel badly about all the ways she chooses to live her life – while making excellent money, I might point out.

What are your thoughts? Let’s pile on down in the comments!

Read Also:   This British Guy Gives His Un-Researched Thoughts on 13 States in the U.S.