Guy Doesn’t Think He Has To Try Food At A Hosted Dinner. Is He Wrong?

I’m pretty sure that most of us were raised by parents who let us know that it’s rude to complain about food you didn’t prepare, and told us that if we were eating in someone else’s house we needed to try the food regardless of whether or not it was typically our favorite fare.

This grown man apparently missed that lesson (or has decided it doesn’t apply to him), but wait – that’s not even the worst part of this story.

He begins by telling us about his son, who sounds pretty impressive – he spent a lot of his school years traveling and learning another language, for one.

I (56M) have a son (28M) who spent a lot of time traveling overseas in his college years.

He went all around the world, including several trips to the Middle East, where he studied for his minor in Arabic language and literature.

Sometime in the past couple of years he found out that he’d fathered a son during his travels abroad and embraced the idea, having his son flown to the U.S. to spend summers and get to know him better.

A few years ago, my son found out that a woman he knew in Pakistan had a son (9M). She claimed this son was his, which I doubted. My son, however, believed her without question.

He asked this woman to send her son to the US to stay with my son so they could get to know each other. He has spent the last few summers here.

Recently he relocated to the States full time and attends an expensive private school. OP takes offense at this because he wants his son to get a DNA test (he refuses).

Recently, the boy moved in with my son fulltime, a decision I strongly urged against. My son enrolled him in the same private school we sent him to at that age, which is very expensive.

I have tried to support my son’s decision, but it has been hard. I really want my son to get a DNA test, but he stubbornly keeps refusing.

When “the boy” became homesick, OP’s son had the idea to create a Pakistani meal with him to remind him of home. They invited their family to come and enjoy it with them so that his son could see that they all respected Pakistani culture.

This was too much for OP to do, because he doesn’t like “spices” and especially not “weird spices” that might have been in the bread.

Recently, things came to a head at a family dinner my son invited us to. He said the boy was feeling homesick, so they cooked Pakistani food together. My son wanted the whole family to eat this food, because he said it would make the boy feel like he and his culture were accepted by the whole family.

Now, I don’t like Middle Eastern food. I don’t like strong spices. My son begged me to just try some of it, or to at least eat the bread they made. The bread had flecks of all kinds of weird spices on it though, so I refused.

OP’s son begged him to just try some of the food, and also to make his grandson feel more welcome – to which OP blew up that he wasn’t even sure he was his grandson.

His son got angry (duh) and OP ended up leaving his wife there and going home.

My son got mad and asked me to please eat something just to “make your grandson happy.” He pulled me aside for this, so the boy wasn’t present to hear our conversation.

I told my son that I have no proof he is my grandson, and even if I did, I shouldn’t have to eat food I don’t like. My son called me a selfish, stubborn A and then asked me to leave. So, I did. My wife stayed though.

OP is doubling down, saying that refusing food he doesn’t enjoy doesn’t make him a jerk, but even his wife agrees that he could have at least tried a few bites to make everyone happy.

My wife agrees with me that I shouldn’t have to eat food I don’t like, but she said I could have at least tried a bite to appease our son. She thinks I was just being stubborn to be stubborn. I wasn’t though. I don’t like Middle Eastern food, that’s all.

How can I be the A for that? Still, my son isn’t speaking to me right now. Should I have just tried some bread?

The top comment makes two good points – that Pakistan isn’t in the Middle East and also that most adults can handle a few bites of food that isn’t their favorite for the sake of manners. 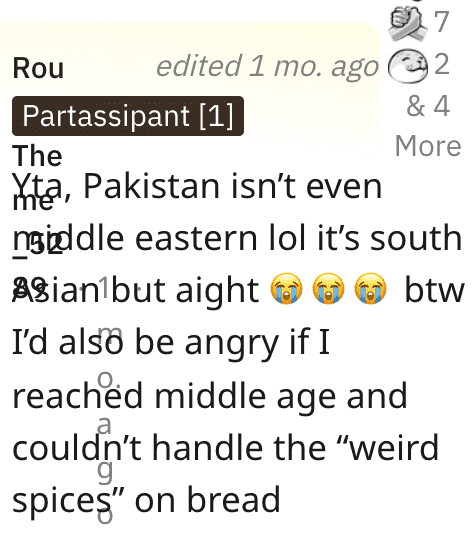 Others who also have spice aversions confirmed that they would try food made by a loved one, so maybe that’s the real problem. 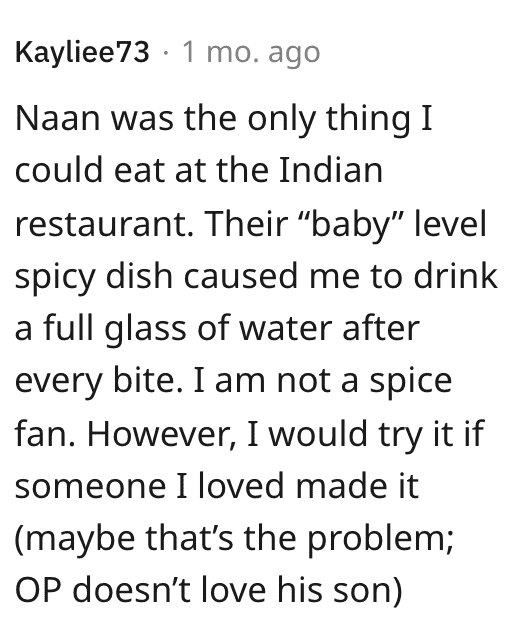 The real issue is obviously how OP treats his grandson. 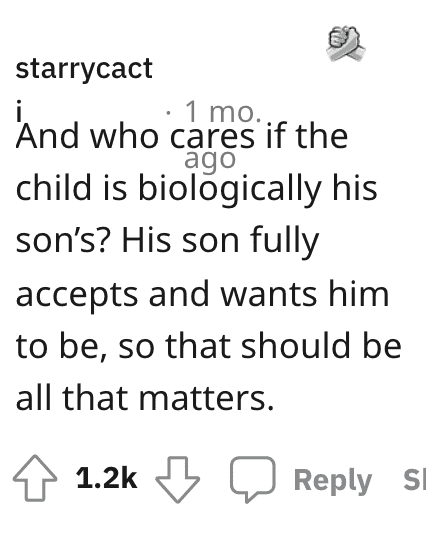 It’s way past time OP accept the reality of the situation. 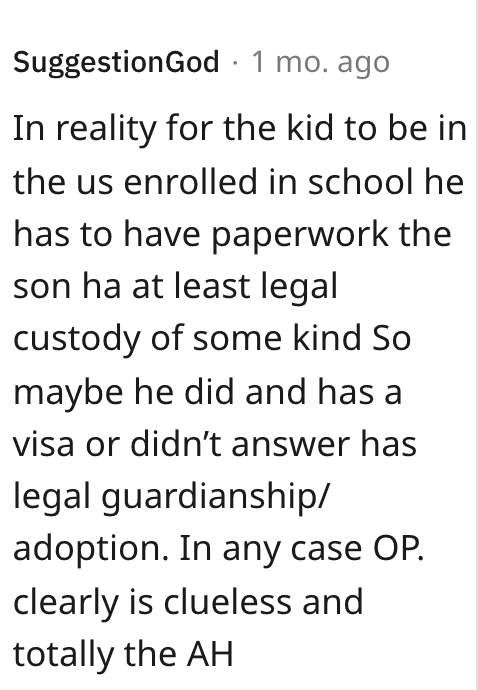 Many people felt as if we aren’t getting the whole story, given the narrator. 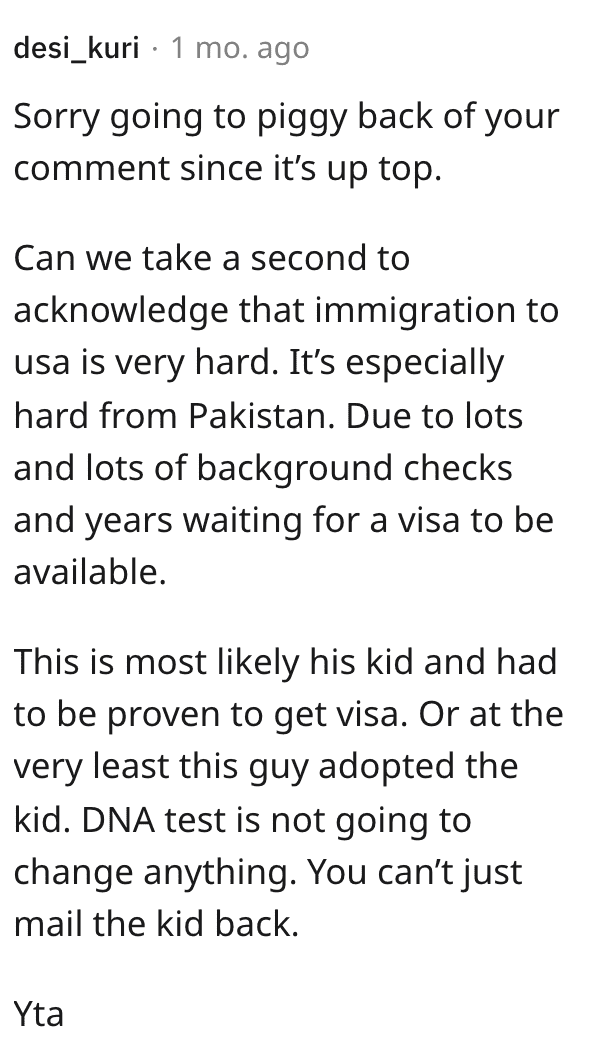 This guy is a real piece of work. I don’t have many kind thoughts to spare for a middle-aged man who throws a fit about “flecks” in his bread.

What about you? Would you have taken a few bites and shut up? Tell us why or why not in the comments!