Who HIDES cameras in someone’s house?

That just sounds INSANE to me!

But I guess you have to have some pretty good reasons if you do something like that, right?

Let’s see what happened in this story and you can make up your mind about whether you think this guy is an a**hole or not.

“I M34 got married to my wife Claire 2 years ago, She has a 6 year daughter (my stepdaughter) that she shares custody of with her ex husband Adam.

So Adam has not dated anyone ever since he and Claire got separated, Claire always talked about how this was a good thing because she believes that my stepdaughter is better off without a witch stepmom to boss her around and abuse her.

Then, Adam started seeing his now girlfriend about 8 months ago, Claire wasn’t happy about it-in fact- she was livid that Adam introduced my stepdaughter to his girlfriend so soon. Claire demanded meetings with Adam’s girlfriend to test and see what kind of stepmom she will be for my stepdaughter, I didn’t give it much attention because of the drama and always having MIL involved as well.

However, I very recently found out that Claire installed several cameras in Adam’s house while he and his girlfriend were away on a trip, Claire had the key to Adam’s house because most of my stepdaughter’s stuff is there.

Keep in mind that I found out by looking at the chat Claire had with MIL so she was in on it too, It irked me because that is a total breach of privacy but when I confronted Claire she said she did this because Adam’s girlfriend was going to move in soon and she wanted to see how she treats my stepdaughter, I told her this was wrong but she said it was all temporary til Adam’s girlfriend is in “the clear”.

I still wasn’t convinced and suggested she remove the cameras because of the huge legal troubles once Adam finds out but she lost her temper on me saying I should stay out of it because I clearly don’t care about my stepdaughter’s wellbeing and happiness, but she had no evidence or even reason to believe Adam’s girlfriend might mistreat my stepdaughter.

Claire said she just wants to “double check” and Adam does not need to know. But I disagreed and said that I will tell him if she won’t remove the cameras which made her lose it on me and get MIL to shut me down and get me to stay in my lane but I couldn’t.

Claire said if I tell Adam then we gonna have a problem and urged me to mind my own business because Adam isn’t more important than my relationship with her so I shouldn’t even entertain the idea of telling him and upsetting claire who is just trying to make sure her daughter’s future stepmom isn’t some witch stepmom in the making.

I still want to tell him but given Claire’s reaction, I’m going to get hell for this and it may not be worth it since me and Adam aren’t on good terms.”

One person said that this guy needs to tell him about the cameras. 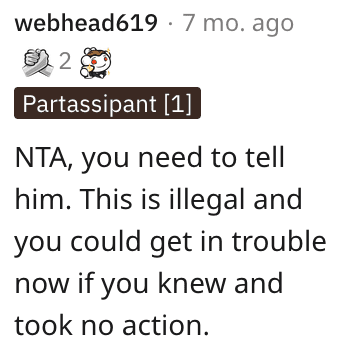 And another individual agreed and said he also needs to do this to protect his stepdaughter.

Another individual said it sounds like this guy needs to reconsider his marriage. 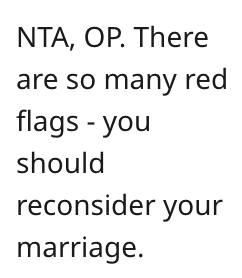