What happened to the days when kids were more than happy to get some chicken nuggets or a grilled cheese sandwich or something?

What does that say about me, by the way…?

Anyway, check out this story from Reddit’s “Am I the A**hole?” page and see if you think this guy was out of line for serving a visiting kid some frozen food.

“My son is Indian, and his friend, who is White, are both 9.

My son brought his friend over after school on the bus. I messaged his mom and asked if this was okay and how late he was staying. She asked if he could stay until 10. I serve dinner around 8, so he would be eating with us. I cook a lot of Indian cuisine in my house because that’s what I grew up making.

My son told me his friend was picky and asked if I could make him something else. I keep fries and chicken nuggets for when my son has picky friends over. So we all sit to eat, and my son’s friend seems happy with the nuggets, and they go to play after dinner. The boy’s mom picks him up a little after 9.

I get a text later asking why I fed her son frozen food when I cooked a fresh dinner for everyone else. I told her my son said the boy wouldn’t eat what I was making. She said I should have made him something also instead of just getting freezer food. I told her I provided free childcare without notice, and her kid chose not to eat what everyone else ate.

I continued that when I was a child, my mom didn’t offer anyone alternatives to what was made, so he’s lucky I accommodated him. She told me she wouldn’t let her son stay with a child a**ser anymore.”

This reader said he’s NTA and that he needs to avoid this woman forever. 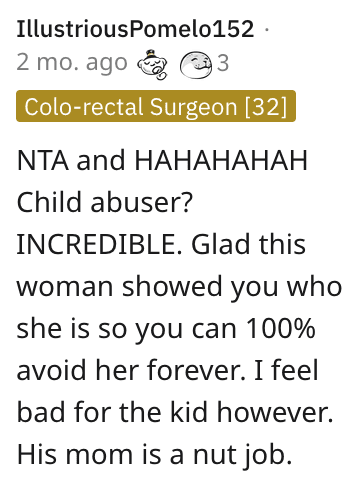 And this reader agreed and laid the sarcasm on THICK. 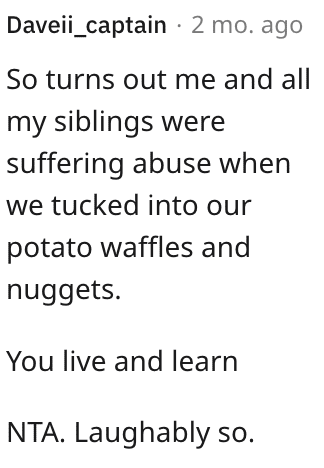 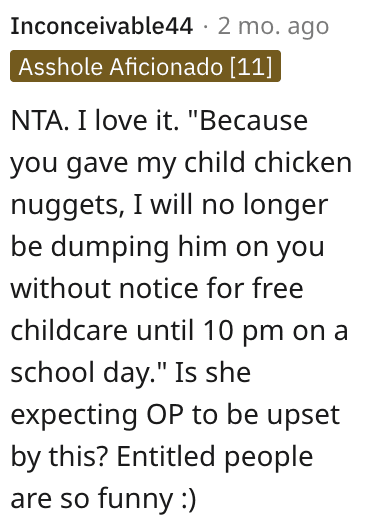