Let me ask you something…

Do you think it’s wrong for a woman to wear a white dress to another woman’s wedding?

As a male, I haven’t thought about it too much but it sure does seem to get some people fired up.

“This happened during this weekend, me being in my early thirties and my gf in her late twenties.

I was invited to a wedding ceremony of a colleague and could bring someone with me. I asked my GF that I’ve been dating for a year if she would like to join me and she was really happy because she apparently loves weddings. Since we don’t live together I drove to pick her up so we’d have some time to spare before the ceremony.

As she comes out she looks really beautiful and has obviously put in time to fix her hair and make-up. She’s also wearing an off-white dress that was rather ornate. As she got in I told her that she looked stunning, but I asked if she could change to a different colored dress for the ceremony.

I’m not one for etiquette by far, but one of the few things I have heard everywhere is that you should not wear a white dress to a wedding unless you’re the bride. She became pretty upset and wanted to know what was wrong with her dress. I said that it would be inappropriate to wear a white or off-white dress unless you’re the bride – and that it’s like wedding-law or something, trying to be lighthearted about it.

She rolled her eyes and said that it was an outdated tradition about women and virginity and that when her friends got married everyone wore white and that it’s not a big thing anymore.

I told her that I don’t know what the dress code is for this ceremony, but since it’s not saying “all white clothes” I still thought she should change to another color but white or “almost-white” – because my colleague was getting married and we had no idea how she felt about it.

My gf became really upset and told me that I was trying to control what she was wearing and that it was abusive, which honestly made me really upset and hurt. I said something along the lines of “F**k, well you shouldn’t go to a wedding with an abuser then” and then I told her to f**k off out of my car.

She began to cry and wanted to apologize and give me a hug, but I just told her to get out, which she did (To clarify we never left the driveway by her home, I did not drop her off in the middle of nowhere or anything like that).

I drove off and she called and texted me a bunch. I answered “I don’t want to talk right now” and then turned my phone off and attended the ceremony. The bride was the only one that was wearing white so I feel as if my gut feeling was the right one. When I got home my phone had blown up by texts from her and her best friend saying that I was being inconsiderate and controlling and should apologize for my behavior.

I’ve vented to a few friends – most of them agreeing with me but some have said that it was an a**hole thing to tell her that she could not wear her dress – because it had nothing to do with me. I feel as if I was in the right since it was my colleagues wedding and it was better to be safe than sorry, but I’m also not sure if I was being an a**hole about the situation.

Here’s what people on Reddit had to say about this.

This person said he’s not an a**hole and his girlfriend should have known better. 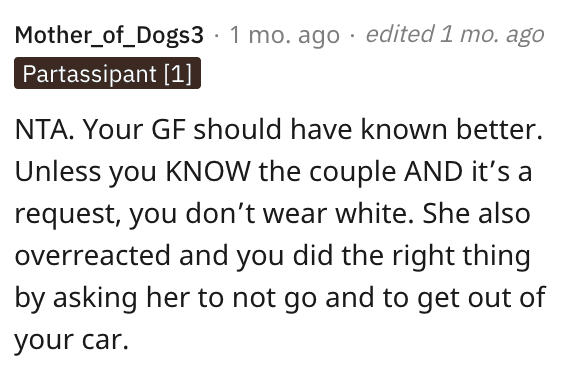 And this Reddit user said it sounds like the guy’s girlfriend either loves attention or was trying to test him. 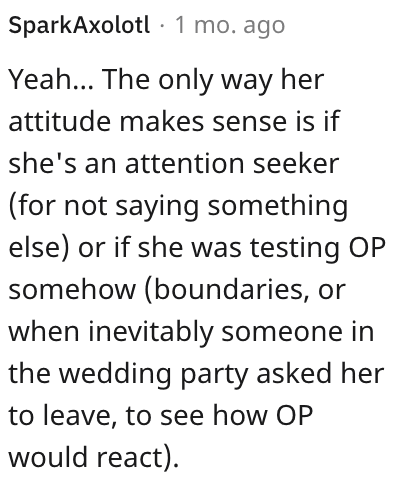 And another individual said this guy is NTA and argued that this is just his girlfriend’s (terrible) personality. 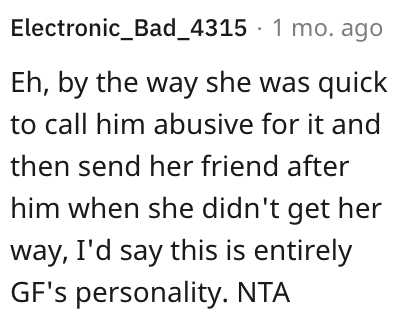 And what do you think about what happened?