I just saw the Seinfeld episode the other day where George thinks his girlfriend should get a nose job…do you remember that one?

Well, if you don’t or you’ve never seen it, you should correct that AFTER you read this story from Reddit’s “Am I the A**hole?” page because they’re kind of similar.

“I (31 M) love my (30 F) wife, we’ve been married for 3 years and there’s nothing I would change about her except that she’s really insecure about her nose and that she get aggressive over it when I try to comfort her.

For as long as I remember, she has always h**ed her nose and mentions it everyday and when I would try to comfort her and tell her it’s beautiful and she doesn’t have to change anything, she would get aggressive and yell that I’m a liar.

2 weeks ago she got a raise at her job and today she suggested the idea of getting a nose job. I said that if she’s that insecure about it to the point that it’s affecting her mental health then she should get it done.

She got extremely upset over this and said that I should’ve said no to the idea. She left the house to go to her mother’s and I haven’t been able to get in touch with her since.

One reader said that this guy is NTA and it seems like he can’t win in this situation.

Another person said his wife needs to grow up and stop trying to be a victim. 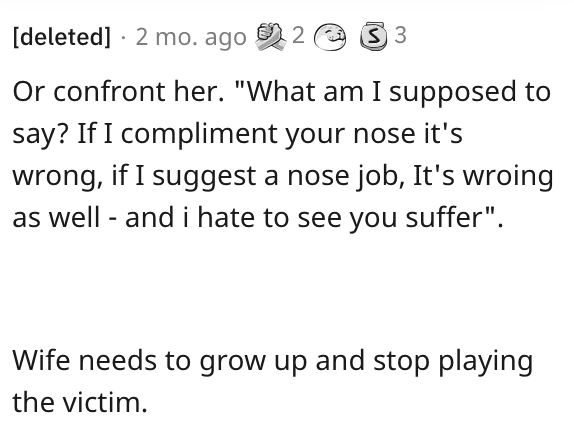 And this Reddit user agreed and said they wish their own husband was as supportive as this guy when it comes that stuff. 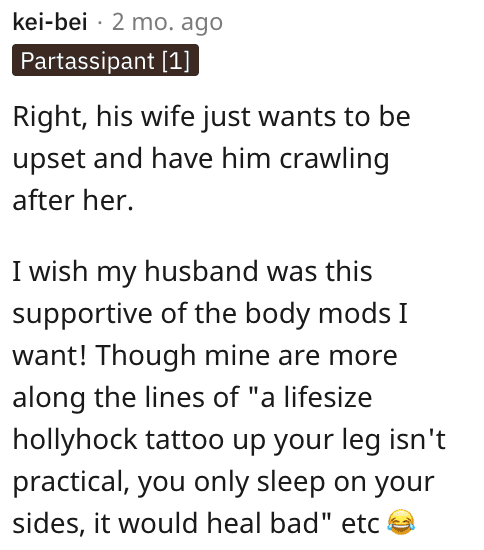