‘Godzilla vs. Kong’ on HBO Max is comforting — in a mindless monster battle kind of way 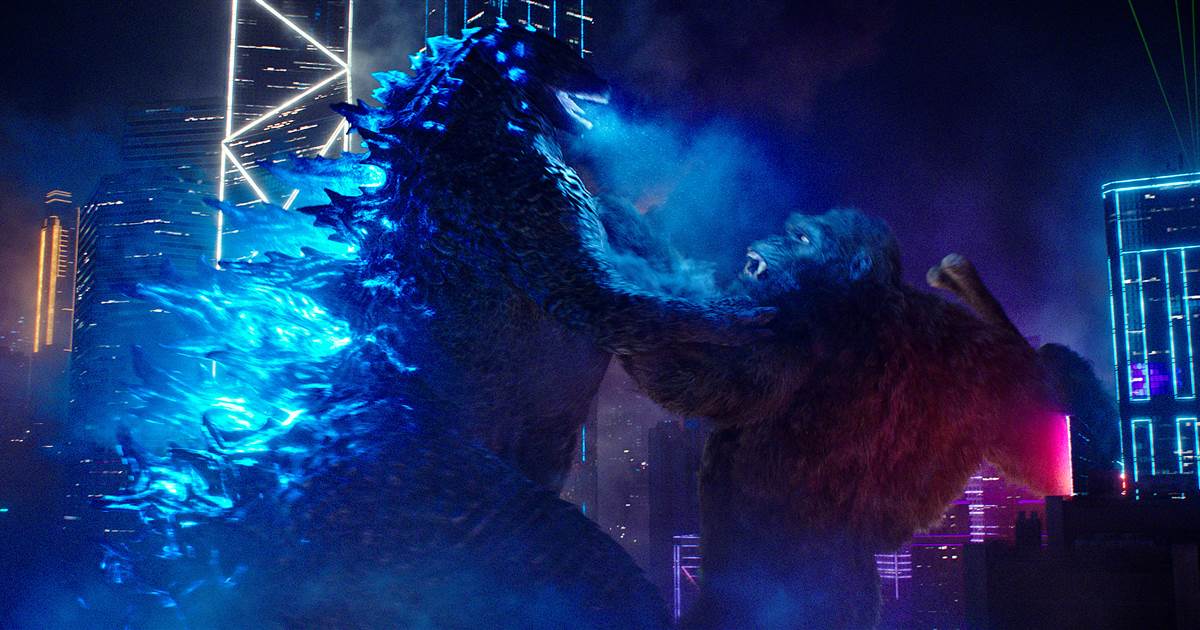 The path to be “the film that reopens theaters” has been a tricky one. Studios don’t want to be seen as encouraging risky behavior, and yet they want to have films ready for that first weekend when ticket sales revive. The franchise hoping this will be that weekend is the latest installment of the long-running “Godzilla” franchise, “Godzilla vs. Kong.”

The film brings the oversize sea monster and the giant ape back together for the first time since 1963’s “King Kong vs. Godzilla.” (Though perhaps bowing to the current anti-monarchist sentiment, the giant ape has retired his royal moniker.) As long as you’re here for the monster fights and cinematic visuals, the film is fine. In fact, there’s something comforting about a mindless indulgence that doesn’t require much from the viewer, whether you’re checking it out on the big screen or at home on HBO Max.

As long as you’re here for the monster fights and cinematic visuals, the film is fine.

When “Godzilla” arrived on screen in Japan in 1954, it was less than a decade out from the devastation of the atomic bomb. Though ostensibly the film was a smash-’em-up monster movie, not unlike 1933’s “King Kong,” it has also come to be viewed as a response to that trauma. A prehistoric sea monster turned into a destructive force via nuclear radiation — mankind’s technology weaponized and then spun out of our control. But after Godzilla wreaked havoc twice in 1954 and ’55, he slowly turned into a strange semi-antihero, protecting his territory from the invasions of various other monsters, from the pollution-created Hedorah to America’s iconic King Kong.

Decades later, America experienced the trauma of 9/11, and, like Japan in the 1950s, we processed it through movies. This time, it was people who were turned into superheroes, rather than innocent sea monsters. But as in “Godzilla,” chaos ultimately hurts the innocent population below. By 2014, the movies stopped dressing up the problem; “Avengers: Age of Ultron” re-enacted the collapse of giant skyscrapers as the collateral damage of a superhero-vs.-superhero battle.

Perhaps ironically, this was also the moment Hollywood chose to bring “Godzilla” out of retirement with a new American-produced franchise. The original Japanese franchise had been spinning out sequels on a fairly regular basis until 2004, when it was finally put to bed with “Godzilla: Final Wars.” (As all good finales do, this brought back nearly every monster co-star ever featured for one last goodbye.) But where, exactly, does “Godzilla” fit if society is no longer in need of its metaphor?

The 2014 “Godzilla” reboot treated its titular monster like a superhero, a creature from the deep here to protect humanity from the monster its technology accidentally awakened. The follow-up, 2019’s “Godzilla: King of the Monsters,” was less successful, giving Godzilla a posse of monstrous followers, known as Titans, who join to heal the planet. The latest installment quietly negates that ending, leaving Godzilla to work alone when facing down his simian nemesis. But this time the film is less interested in attempting to turn Godzilla (or Kong, for that matter) into some kind of oversize animal guardian of the galaxy and more interested in the WWE-style bombast of Lizard vs. Ape.

This time the film is less interested in attempting to turn Godzilla (or Kong, for that matter) into some kind of oversize animal guardian of the galaxy.

There are vague attempts to keep the monsters sympathetic. Millie Bobby Brown reprises her role from the 2019 film as Godzilla-whisperer Madison, along with Kyle Chandler as her animal behavioral specialist father. She also gains a counterpart in Kaylee Hottle as Jia, who is a corresponding human friend for Kong. They’re joined by Alexander Skarsgård as a faux Indiana Jones figure and Rebecca Hall as a fake Jane Goodall, as well as a new crew of somewhat expendable humans, including Brian Tyree Henry, Demián Bichir, Shun Oguri and Eiza González.

Brown and Hottle do their best to be spokespeople for their assigned monsters, and if you’re inclined to side with one or the other, you might even be swayed by their arguments. But for the rest of the cast, it’s a little like being the human characters on “Sesame Street.” No one tuned in to watch you. That having been said, the cast is talented enough to do what they need to with the little they’re given, and no one turns in a bad performance — which is all we can really ask for.

It’s not a spoiler to say that because of circumstances that don’t add up, it is deemed a good idea to take Kong from Skull Island and place him directly in the sights of Godzilla. Said sea monster deems the entire concept of “oversized ape” a threat to humanity. Thus, and of course, the monsters battle. But wait, there’s more. The title fight is actually a prelude to monster-mashing madness when Mechagodzilla shows up for the party (that’s Godzilla’s robotic double, for the uninitiated), because man cannot just have a large nuclear waste-empowered sea monster; he has to go and make a computerized version for good measure.

Since it was announced, “Godzilla vs. Kong” has been a naked attempt by Warner Bros. and Legendary Pictures to continue one long-running famous franchise while simultaneously reviving another just-as-famous franchise. One assumes that more Godzilla carnage will follow, while a Kong-led film with crossover potential will arrive not long after. It’s doubtful that either film will have anything more to say than the current one. But after a tough year, sometimes you just want to watch monsters hit each other.