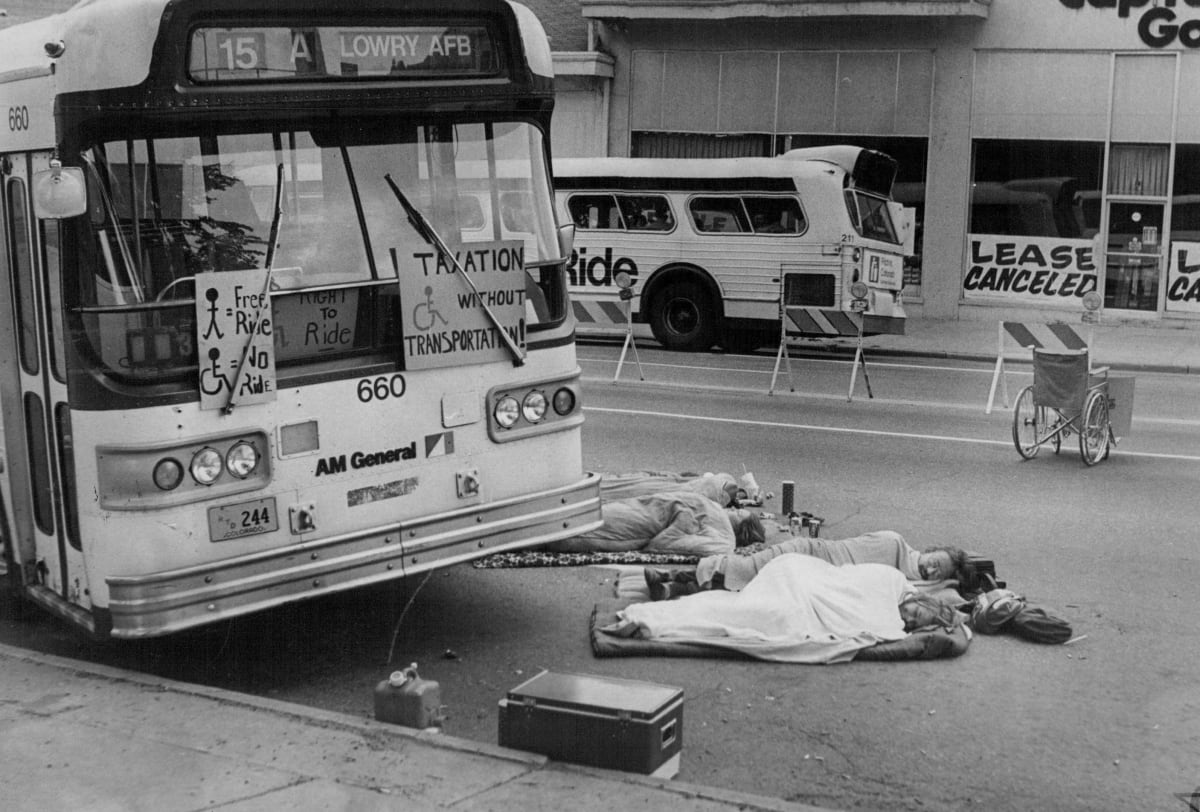 On July 5, 1978, a Regional Transportation District (RTD) bus stops at the intersection of Colfax Avenue and Broadway in Denver, Colorado. When passengers were boarding, a group of people in wheelchairs positioned themselves in front of the bus, preventing it from leaving the stop. When a second bus pulls up behind it, more people in wheelchairs position themselves behind that bus and refuse to leave, trapping the buses between them. For the next 24 hours, 19 disabled activists known as the “Gang of 19” are keeping the buses where they are, making a powerful statement about accessible transportation in the city and across America.

Denver had recently updated its bus fleet, but only a handful of its vehicles could accommodate people in wheelchairs. The cost of a ride was prohibitive for many people with disabilities, and the tiny number of accessible buses meant that a single ride could take disabled passengers for most of the day.

In 1977, a group known as Atlantis Community sued the city for demanding more accessible vehicles, arguing that “we put people on the moon, so we can probably put lifts on the buses.” Atlantis, a group dedicated to providing free, individualized care to those in need, recognized the importance of challenging the status quo and did so through an offshoot, ADAPT (American Disabled for Attendant Programs Today). Led by Atlantis co-founder and Presbyterian minister Wade Blank, it was ADAPT members who organized the protest a year later, disrupting downtown rush hour traffic and refusing to budge until RTD agrees to install lifts in at least one third of its fleet.

The demonstrators chanted “We will roll!” as the media, local and national, captured what was happening at the intersection. The police who arrived at the scene “didn’t know what to do”, according to activist Barry Rosenberg, who took part in the action. The following day, RTD officials held meetings with protesters and indicated their willingness to discuss the installation of elevators. Eventually, RTD and Atlantis settled their lawsuit, with the transportation authority agreeing to the demand that a third of Denver’s buses be made wheelchair accessible. “It was the start of something big for people with disabilities,” Rosenberg later said.

The protest was just the beginning for ADAPT and for the disability rights movement. ADAPT continues to organize for accessibility and health care to this day – its members came out in force in 2017 to pressure their lawmakers to defend the Affordable Care Act against a Republican proposal to “ repeal and replace it”. As activism spread across the country following the actions of the Gang of 19, momentum built for federal accessibility legislation, culminating in the landmark Americans With Disabilities Act of 1990.

READ MORE: When the ‘Capitol Crawl’ dramatized the need for the Americans with Disabilities Act