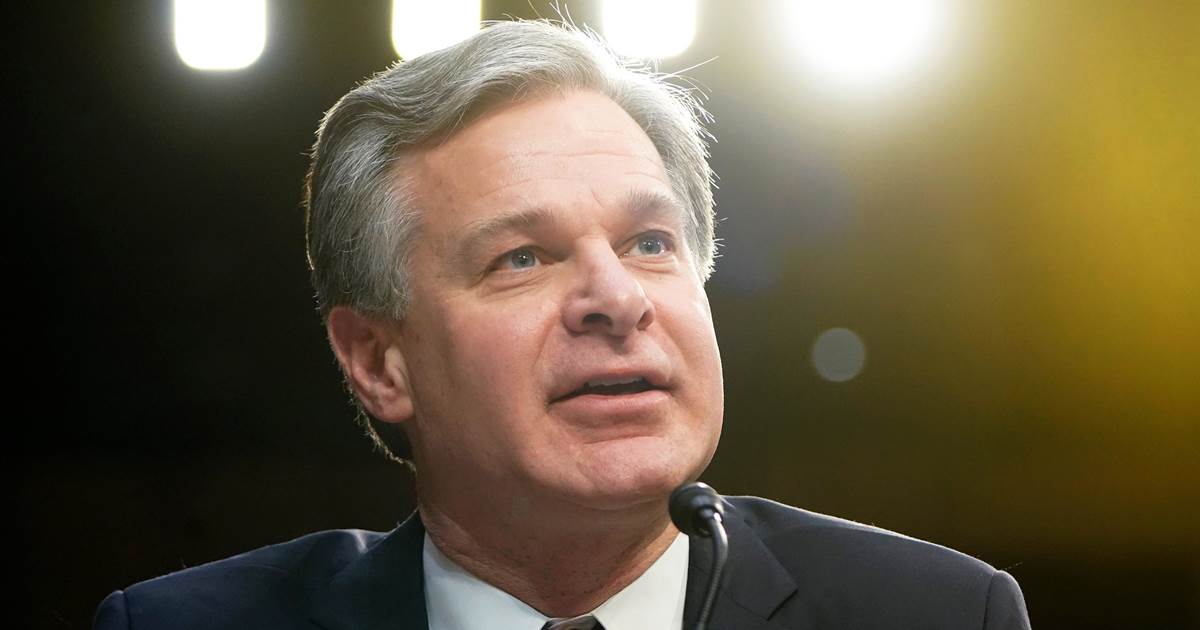 WASHINGTON — FBI Director Christopher Wray is expected to face questions from Congress on Tuesday about whether his intelligence analysts missed warning signs before the riot at the U.S. Capitol and how the bureau plans to confront the rising threat of domestic terrorism.

Wray’s appearance before the Senate Judiciary Committee will be his first public testimony since September and the first formal statement from the FBI about the status of the riot investigation, one of the most expansive in its history.

It will also be his first opportunity to discuss why the FBI did not detect in advance what it now says in court documents was extensive plotting and planning by known extremist groups that attacked the Capitol in coordinated fashion.

Wray made some brief remarks during a televised inauguration security briefing last month, but he has not attended any of the many news briefings about the riot and the investigation.

“I’d like to hear Wray explain the factors that seem to have caused the FBI not to see the threat that so many of us saw,” said NBC News national security contributor Frank Figliuzzi, a former assistant director of the FBI. “And then, once they saw it, why did they treat it as just another piece of intel?”

Sen. Dick Durbin of Illinois, chair of the Judiciary Committee, and other Democrats on the committee sent a letter last week asking Wray pointed questions about whether the bureau was doing all it could to counter domestic terrorism. A majority staffer confirmed Monday that Wray will be questioned about domestic threats and the Capitol riot.

Wray, who was appointed by President Donald Trump, will remain as director as he serves what is supposed to be a 10-year term, the Biden administration announced last month.

When it comes to the massive federal investigation of the people who stormed the Capitol on Jan. 6, Wray will be able to tell a story that arguably depicts the FBI at its best — an unprecedented effort to scour social media and other sources for evidence that has led federal prosecutors to charge more than 300 people in the nearly two months since the siege.

According to court documents, about three dozen were members of three extremist groups — the Proud Boys, the Oath Keepers and the Three Percenters.

They face the most serious charges, of conspiracy. The FBI said in court documents that members of the groups conducted detailed planning for an invasion of the Capitol and coordinated their movements once they got inside.

Prosecutors said they were among the first people to breach the police lines surrounding the building and to smash a ground-floor window, allowing the first rioters to enter.

Wray vowed in a statement Jan. 7 to hold Capitol rioters accountable, and so far, the FBI appears to be doing that. The investigation continues, and more charges pile up every week. Over the weekend, it emerged that the FBI had isolated video of an unidentified person spraying chemical irritant at police officers and that the FBI now suspects that that may have contributed to the death of Brian Sicknick, the Capitol Police officer who collapsed after engaging with rioters.

About the twin questions of why security forces seemed so unprepared for what happened and whether the FBI is devoting enough resources to domestic terrorism, Wray may face choppier waters.

In congressional hearings last week, the current and former chiefs of the Capitol Police said they saw no credible intelligence from the FBI and other law enforcement organizations that a violent mob might storm the Capitol.

Yogananda Pittman, the acting Capitol Police chief, said the final intelligence assessment before the riot indicated that militia, white supremacist and other extremist groups would participate in some kind of demonstration Jan. 6. The assessment also said they planned to be armed and to target Congress in what they saw as their last opportunity to stop the presidential vote count.

It also said they were desperate, Pittman said, but that “no credible threat indicated … thousands of them would attack the Capitol.”

Lawmakers are likely to explore whether the lack of warning amounted to an intelligence failure, a failure of imagination or both. In the days before the Jan. 6 pro-Trump rally in Washington, internet chat rooms and social media forums were filled with calls for violence to stop the congressional counting of Joe Biden’s Electoral College victory, as NBC News documented the day before the riot.

After the attack, it has become even more evident that vows of violence were being made, openly, on pro-Trump internet platforms.

“In the days leading up to Jan. 6, I received a flood of texts from family and friends telling me to ‘be safe’ at the joint session,” said Eric Swalwell, D-Calif., a member of the House Intelligence Committee. “They didn’t have access to intelligence. But they did read the tweets from President Trump and his supporters. This was completely foreseeable.”

FBI officials have responded that social media chatter is not the same as intelligence and that there was no clear indication of an organized plot.

A raw intelligence report from the FBI’s field office in Norfolk, Virginia, did warn of possible violence, but it was distributed after business hours the night before the riot, officials have said, and it did not reach top police officials. In any event, it was not considered well-founded enough to act on.

Wray is likely to be grilled about all of that. He will also be questioned about the hotly debated issue of whether current law gives the FBI enough authority to investigate domestic violent extremists.

A cross-section of civil liberties groups opposes any such move, fearing that it would, indeed, grant the FBI more authority and that the new powers would be used against marginalized communities. Imagine what Trump would have done with domestic terrorism laws, they say.

“This new authority could be used to expand racial profiling or be wielded to surveil and investigate communities of color and political opponents in the name of national security,” more than 150 civil rights organizations said in a letter last month.

Another issue lawmakers may raise is whether federal authorities, and the FBI in particular, have shifted enough resources from the diminishing danger of jihadi-inspired international terrorism to the burgeoning threat of domestic violent extremism from white supremacists, anti-government zealots and anarchists.

Yet the federal government continues to spend far more in money and manpower addressing international terrorism.

Michael C. McGarrity, then the assistant director for the FBI’s Counterterrorism Division, told Congress in 2019 that 80 percent of the bureau’s terrorism cases were international, including those of jihadi-inspired Americans, compared to 20 percent that were domestic. Wray is likely to be asked to update those ratios and explain how the bureau is adapting to the new threat picture.

Officials at the Justice Department, which includes the FBI, told reporters last week that they are boosting the number of lawyers and investigators devoted to cases of domestic terrorism. Anti-government sentiment and racial or ethnic hatred are now the top two motivations for attacks by domestic violent extremists, an FBI official said.

“2020 was a busy year,” the official said. “The violent reaction to a mixture of events that took place around the country is unlike anything we have seen in decades.”