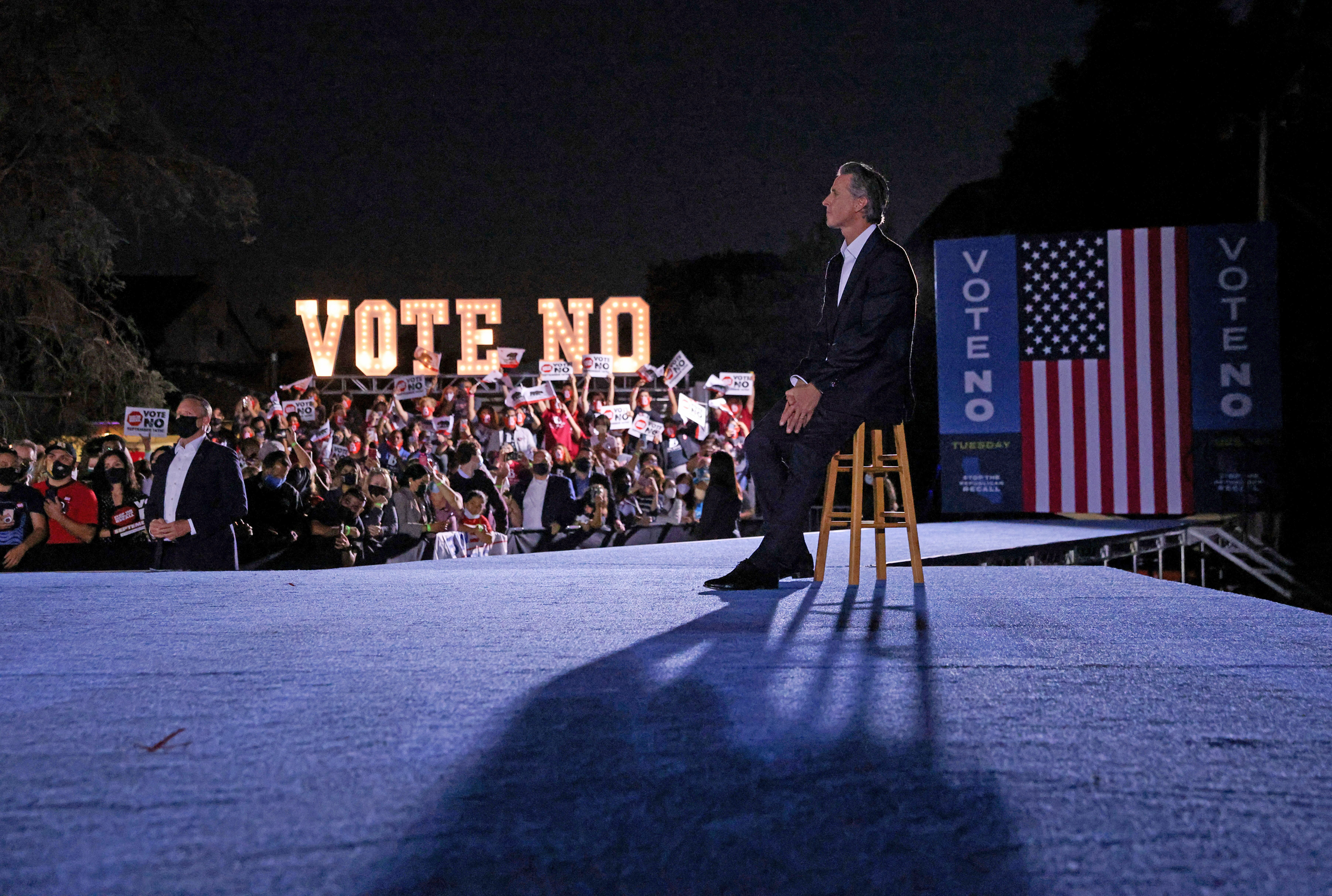 Ahead of polls closing in California’s recall election, where voters are deciding whether to remove Democratic Gov. Gavin Newsom from office, NBC News exit polls found support for the Covid mitigation measures he instituted in the state.

The unusual recall election asked whether Newsom should be removed from office and gave voters who wanted to see him ousted the choice of 46 alternatives. Polling places close at 8 p.m. PT.

Frustration with Covid-19 restrictions helped recall organizers gather the roughly 1.5 million signatures they needed to force the vote. But Newsom ended up making his support for mask and vaccine mandates the closing argument of his campaign, warning that a Republican replacement would undo his health restrictions if elected.

An NBC News exit poll found voters likely sided with Newsom on the public health measures, with a plurality, or 45 percent, saying Newsom’s Covid policies are right, compared to 32 percent who said the measures are too strict. Another 17 percent said they aren’t strict enough.

The NBC News exit poll results of early and Election Day voters found 69 percent support Newsom’s mandate requiring students to wear facemasks in schools and 63 percent said getting vaccinated against the coronavirus is more about a “public health responsibility” than a “personal choice.”

Newsom has been weighed down by a slew of issues facing the state, but those voting for and against recalling the Democrat had different views of which issues were most important, according to NBC News exit poll.

The pandemic was the top issue for those who wanted to keep Newsom in office, with 42 percent citing that as their top issue. It was followed by homelessness, cited by 22 percent, wildfires by 18 percent, the economy by 9 percent and crime by 2 percent.

Democrats were worried weeks ago when it looked like Democratic voter enthusiasm was low, but grew hopeful when recent polls showed more voters paying attention.

Every registered vote in the state was sent a mail ballot and millions have already returned theirs, but it could still take several days for the outcome to be clear if the race is close as officials count votes from people who voted in-person on Election Day-votes as well as mail ballots that arrive late.

Early returns are likely to look artificially blue, since Democratic voters often like to vote early by mail while many Republicans wanted to wait to vote on Election Day.

The two-question ballot asked voters first if Newsom should be removed from office and then, if so, who should replace him, with controversial conservative radio host Larry Elder leading the crowded field of potential replacements.

If the first question succeeds, then whoever wins the most votes on the second question would become governor.

As polls showed Newsom likely to survive the recall, Republicans began to sow baseless seeds of doubt about the integrity of the vote, with former President Donald Trump calling the vote “rigged” and Elder’s campaign promoting a website that claimed it had found fraud in the results before any were even released.