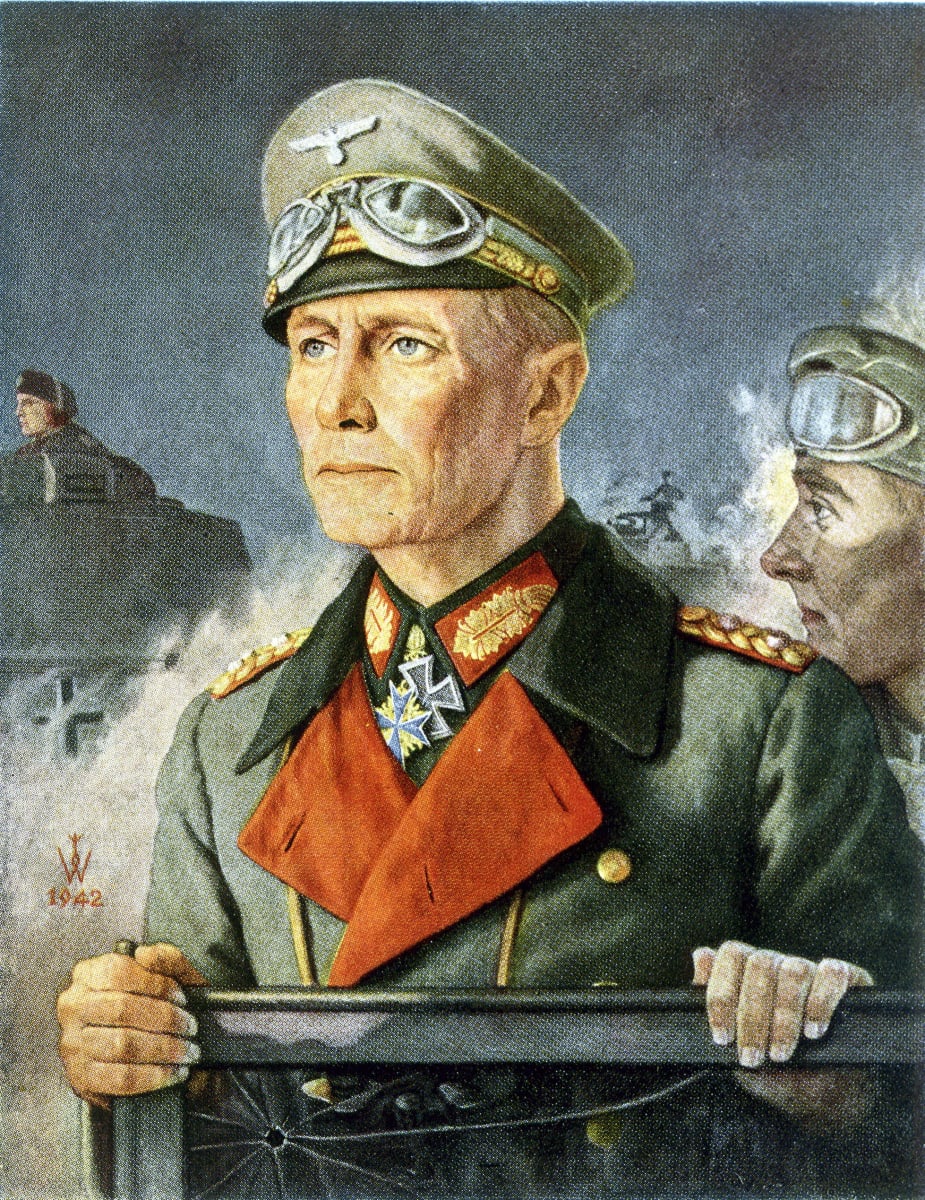 Erwin Rommel (1891-1944) was a German Army officer who achieved the rank of Field Marshal and rose to prominence at home and abroad for his leadership of the German Afrika Korps in North Africa during the Second World War. Nicknamed “the desert fox”, Rommel also commanded the German defenses against the Allied invasion of northern France. After being involved in a plot to assassinate Adolf Hitler, he committed suicide in October 1944.

Early life and service in World War I

Rommel was born on November 15, 1891 in Heidenheim, in the kingdom of Württemberg, Germany. While his father was a teacher and school principal, young Rommel showed little interest in academics, and his family urged him to pursue a career as an army officer. As the most prestigious cavalry and guard regiments were limited to those of noble or military origin, the 18-year-old Rommel joined the 124th Württemberg Infantry Regiment in 1910.

During World War I, Rommel served with distinction in Romania, France, and Italy, earning a reputation for bravery and aggressive combat tactics. After notable successes on the Italian front, during the battle of Caporetto and the capture of the city of Longarone, he was promoted to the rank of captain in October 1918, shortly before the armistice. He married Lucia Maria Mollin while on leave from the army in 1916; their son, Manfred, was born in December 1918.

Between the wars, Rommel served in the Weimar Republic Limited Army as a People’s Instructor at the Dresden Infantry School and the German War Academy in Potsdam. In 1934, he met Hitler, who had just consolidated power in Germany as führer, chancellor and commander-in-chief of the army. The following year Hitler reintroduced conscription, a policy that began the reconstruction of the German armed forces.

In 1937, Rommel’s reputation as a senior military instructor led Hitler to appoint him as the German War Ministry’s Liaison Officer to the Hitler Youth Organization. Although Rommel was quickly removed from his post due to his difficult relationship with Hitler Youth leader Baldur von Schirach, Hitler personally asked Rommel to command his personal escort battalion, which accompanied the Fuhrer whenever he was leaving Germany. Rommel held this post during the Nazi invasion of Poland in 1939, during which he was promoted to the rank of Major General.

From Blitzkrieg to Afrika Korps

Hitler gave Rommel command of the 7th Panzer Division, one of 10 tank divisions that took part in the lightning invasion of Belgium and France that began on May 10, 1940. As his division advanced with impressive speed, Rommel insisted on leading his men from the front lines, as opposed to commanding from behind. Less than a year later, this daring and dynamic style earned him his appointment as commander of the Afrika Korps, the German troops sent to aid Italian forces fighting the Allies in North Africa.

Arriving in Africa in February 1941, Rommel quickly took charge of the faltering Axis campaign, securing several quick victories against British defenses around Cyrenaica and surrounding the coastal fortress of Tobruk in mid-April. In early 1942, he launched another offensive, culminating in the defeat of the British at the Battle of Gazala in June and the capture of Tobruk. Rommel’s quick surprise attacks garnered admiration and praise even from his enemies, and his nickname, “Desert Fox”, became widely used among British soldiers as well as German soldiers.

The tide of war quickly turned against the Axis in North Africa, with Allied forces retaking Tobruk in the Second Battle of Alamein in October 1942, defeating Rommel’s exhausted and under-supplied troops. In March 1943 Hitler ordered Rommel, now Marshal, to return to Europe.

Role in Normandy and the plot to kill Hitler

After briefly commanding forces in Italy, Rommel headed for northern France, where he was tasked with fortifying German defenses along the Channel coast before a planned Allied invasion. Unlike the other German generals, he favored a daring counterattack strategy after the Allied landings, a disagreement that would eventually weaken the German response when the invasion began on D-Day (June 6, 1944).

By the spring of 1944, Rommel had grown disillusioned and doubted Germany’s chances of winning the war and criticized Hitler’s leadership. At one point, it is believed he spoke with friends who were involved in secret opposition to Hitler, but most historians suggest he was probably not actually involved in the failed attempt to assassinate Hitler on the July 20, 1944.

During the invasion battle in Normandy, Rommel was seriously injured in an airstrike on his car by British fighter-bombers on July 17. In August, he returned to Germany to complete his recovery. Having learned of Rommel’s contact with the July conspirators, Hitler did not want to create the spectacle of a popular general tried (and executed) for opposing him. Instead, he sent two generals to Rommel’s home to offer him the choice to kill himself rather than face a public trial (and possible repercussions on his family). Rommel chose to take this option and used cyanide pills to kill himself on October 14, 1944. He was given a state funeral and buried with full military honors.