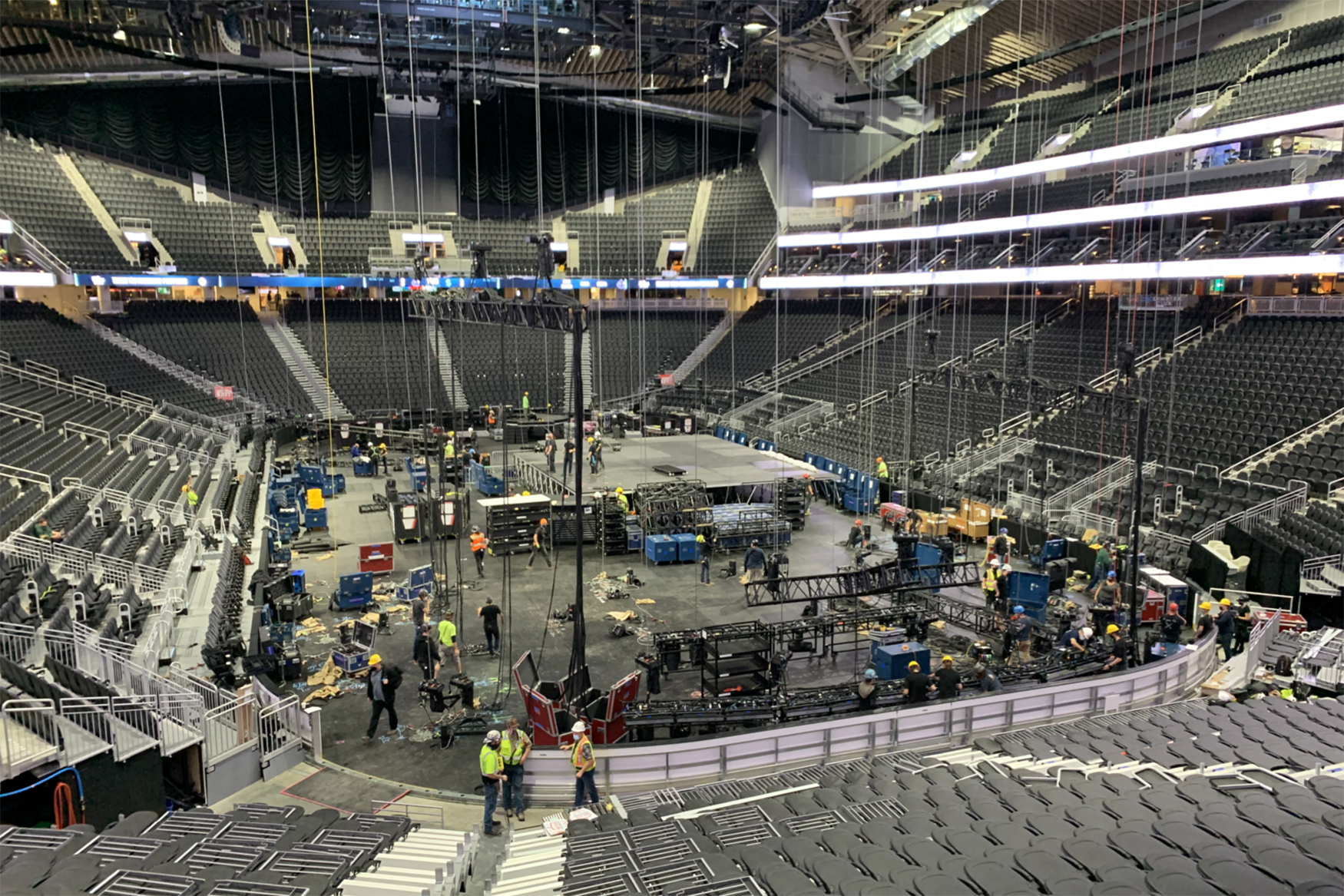 Walk through the south entrance and visitors will see a one-story digital waterfall pouring through a forested scene above the atrium escalators. Some 8,500 plants from 24 species are displayed on a “living wall” along the new arena’s west concourse (the plants take root in recycled plastic and have their own team of horticulturist caretakers). Hockey players will skate on rainwater drained from the roof, filtered and then frozen to create the playing surface (a detail  almost every team representative is excited to share).

This 740,000-square-foot hockey palace — which aims to be the first net-zero carbon arena in the United States — is one of the most ambitious green building projects in the nation with a price tag of $1.15 billion. And neither the team’s executives   nor the building’s interior design  is shy about it.

The goal: No fossil fuels (achieved), no single-use plastic by 2024 and little-to-no waste.

The Zambonis are electric, the cutlery is bamboo and the trash cans — yes, they still have them — are not long for the concourses if all goes according to plan.

On Wednesday, machinery purred and paintbrushes swished against the carpentry as workers put the finishing touches on the building, which is set to host the Seattle Kraken’s first home NHL game Saturday night. Kitchen equipment like fryers, held in port due to the global shipping crisis, still awaited installation.

The arena’s climate promises, too, remain a work in progress. An offsite project to generate renewable energy, in partnership with the local utility, remains in the planning phase. Staffers are just beginning to calculate the cost — in emissions — of fans’ attendance and travel to games, which arena operators plan to cover by buying carbon offsets that invest in environmental projects.

Team and arena executives hope their lofty ambitions and the attention they’re seeking to promote them will overcome skepticism and jump-start a green building movement at emissions-spewing stadiums across the country.

Buildings are responsible for roughly a third of U.S. emissions and prime targets for carbon reductions.

“It’s a moral imperative,” said Rob Johnson, the vice president of sustainability and transportation for the Seattle Kraken and the Climate Pledge Arena, adding that a full and transparent accounting of the arena’s carbon impacts will be public. “We hope that’s going to show cynics we really mean it.”

The idea to go carbon-neutral at  the arena started at the top — with the building’s roof.

Designed for the 1962 World’s Fair, the roof once put a lid on KeyArena, which hosted the WNBA’s Seattle Storm and once featured the NBA’s SuperSonics. But by 2017, the city-owned building had begun to trend toward disrepair.

Seattle put out a call for redevelopment bids amid public debate, seeking private money to spruce up the arena, lease the space and draw in new professional sports franchises.

One complication: The roof, designated as a historical landmark, had to stay. Whoever took on the project would need to preserve 44 million pounds of sloping concrete and steel. And to accommodate modern professional sports, the relatively small arena would have to grow.

The solution — a privately-funded project led by the Oak View Group, a sports and entertainment development and management company — would require a feat of engineering.

Workers sliced through the concrete columns, holding the roof up by installing 72 temporary steel pillars.

“It was on stilts,” Ken Johnsen, the project’s construction manager, said.

Then, workers dug about 600,000 cubic yards of soil to expand the arena footprint before reconnecting the columns and building out its bowl.

New arena construction is among the most carbon intensive building projects, said Kate Simonen, a professor and chair of the department of architecture at the University of Washington, who was not involved in the project.

Holding a structure up and preserving lines of sight across a bowl require large spans, which  require more concrete and steel — more carbon.

“To reuse an existing facility is the first, best thing you can do from a material carbon perspective,” said Simonen, who also heads the Carbon Leadership Forum, a nonprofit group that aims to reduce embodied carbon in building materials. “The more we can do about evaluating and appreciating things that already exist, the better along we’ll be toward meeting climate goals.”

According to Johnson, saving the historic roof preserved enough building material to construct an entire football stadium today. It also set the project on a path to try something novel.

A partnership with Amazon — a company with a self-reported yearly global carbon footprint roughly equivalent to nearly two-thirds the greenhouse gas emissions of Washington state, according to emissions tallies — pushed the arena’s green dreams further.

The Seattle-based company, which has been roiled by protests from environmental activists and criticism from employees over climate change, purchased the arena naming rights to promote its new public pledge to reach net-zero carbon by 2040.

The arena operators and Amazon decided the building ought to achieve that designation right away.

Workers installed solar panels on the new atrium and a nearby garage, which will meet an estimated 3-5 3 percent to 5 percent of the building’s energy needs, according to Johnson.

The team purchased two lithium-ion powered Zambonis to resurface the ice, becoming the second NHL franchise with an electric ice resurfacing machine, according to Doug Peters, a Zamboni sales manager.

A renewables project being planned by Seattle City Light will ultimately account for 100 percent of its remaining electrical use.

“We’re ensuring the building through time is going to remain zero carbon and we’re adding new renewable energy to the grid,” said Jason McLennan, a sustainability consultant who worked on the project.

The arena management group plans to file next October for zero-carbon certification from the International Living Future Institute, a sustainable building organization. A third-party auditor will verify whether it meets the requirements.

Some 37 percent of Seattle’s emissions come from building operations, according to an inventory of  its greenhouse gas sources.

“If you look at the building industry at large, we haven’t moved the needle fast enough,” McLennan said.

“When I first heard about it, it seemed very symbolic, but when I learned more about their operation and building plans, it felt more significant,” said Deepa Sivarajan, the Washington policy manager of a Pacific Northwest nonprofit group called Climate Solutions. “We need all of our buildings to be getting to this place.“

Perhaps the most ambitious plan is for the arena to offset the impacts of its fans.

For every fan who attends a concert, hockey contest or basketball game, the arena will purchase carbon offsets to make up for their travel and the food they eat. Staffers will track and offset how food and merchandise arrive at the facility. The offsets will fund environmental projects designed to reduce emissions or remove carbon from the atmosphere.

The arithmetic remains a daunting task, Johnson said. The arena expects to host about 200 events a year with as many as 18,300 people in attendance. The arena operators will have to collect enough data — through fan surveys, parking lot counts and attendance information — to calculate the carbon cost of cheering on the teams.

Each Seattle Kraken ticket includes a bus pass, which could help reduce the carbon cost of transportation.

Johnson said the organization does not have a budget or estimate for the cost of offsets. The group’s carbon accounting will be made public, he said.

And about the arena’s in-your-face tone: He hopes it pushes people to reflect on their personal carbon footprint.