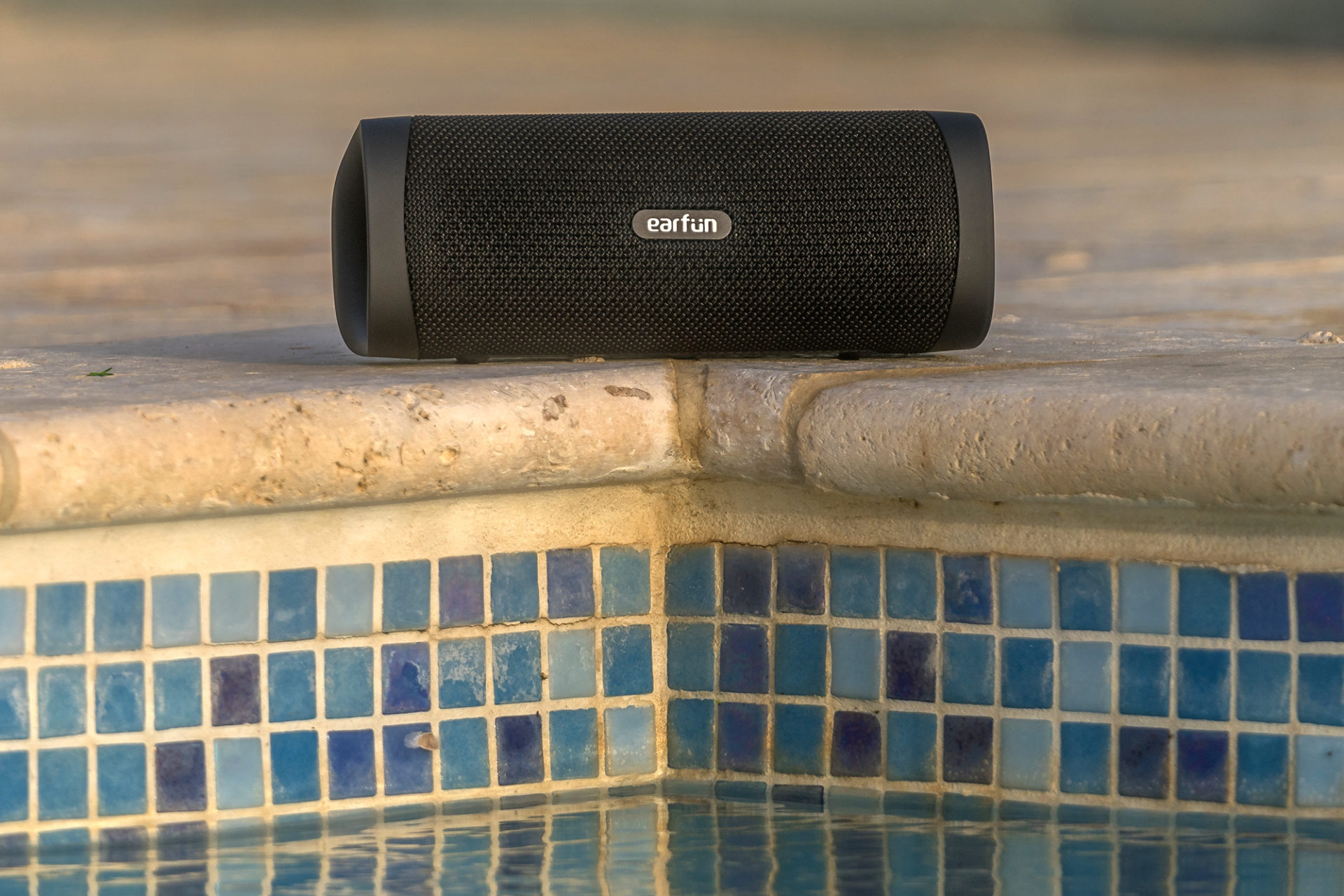 “Portable and ready to play better than you think.”

It’s easy enough to find a wireless Bluetooth speaker small enough to fit in your backpack or carry-on when you take it with you, but what’s worth spending some money on? money to serenade your ears? The multitude of options makes good value for money all the more appealing when you find it, and that’s the EarFun UBoom L in a nutshell.

At $80, you’re not breaking the bank compared to other speakers and you’re getting great sound for every dollar you spend on it. We’ve taken this speaker everywhere to find out how much each dollar stretches when the music is playing.

What’s in the box

EarFun didn’t pack much into the UBoom L box. Other than the speaker itself, you only get a USB-C charging cable and a user manual. Although the speaker has a 3.5mm Aux-In jack, you don’t get a cable in the box. There is also no wall charger for the USB-A to USB-C cable.

When looking at the UBoom L for the first time, there is nothing remarkable about it. It looks just like any other Bluetooth speaker, with a fabric skin and rubberized bumpers on each end protecting the dual passive radiators. This is purely meant to be a side speaker, meaning you lay it flat. While you can stand it up, it’s not on a secure footing, and it’s pretty clear that wasn’t the original intention.

If size matters, the speaker measures 3.07 x 8.26 x 2.83 inches, with the top angled slightly to make the front more prominent and give it a slightly upward orientation. It’s fairly easy to carry around at 1.43 pounds, and if you’re clumsy with it, you’ll probably still hear it playing. The UBoom L is waterproof, able to withstand salt water – plus, it floats, so an accidental dip won’t see it drop like a stone to the bottom.

EarFun does not specify a shock rating beyond its IP67 protection for water and dust resistance, but there’s some durability here. I wouldn’t describe it as rugged enough that you can abuse it, but an unfortunate drop to the ground shouldn’t stop it from working. It fits perfectly outdoors, whether at the beach, at the pool, in the hot tub – practically anywhere you can put your feet up to relax and listen to music.

A rubberized cover protects the USB-C and 3.5mm Aux-In ports on the back, keeping water out, although I don’t like having to open it every time anymore as the flap is difficult to grasp and open. Luckily, it’s not something you’ll likely need all that often, at least until you need to charge it.

There aren’t any fancy proprietary technologies at work when it comes to how the UBoom L outputs sound, so it’s more about how EarFun designed the components inside. Two 55mm drivers and a Class-D amp pump out 14 watts per channel, with the aforementioned passive radiators pushing out the bass at both ends.

Pairing the UBoom L is fairly easy to do by simply going to your device’s Bluetooth menu and going from there. EarFun doesn’t support the speaker with app, so you don’t have any tools to DIY. But there are a few important points that stand out.

The speaker has two playback modes: indoor and outdoor. Press the far right mode button to switch between them, with the white LED indicating when outdoor mode is activated. The other is stereo pairing for left and right channels. Here too, there are two ways to proceed. You can choose to play them as separate left and right channels, or in ‘party mode’, which essentially allows both speakers to play the same content without the stereo pairing.

The rest of the control layout is pretty simple. You have play/pause, flanked by volume up and down, as well as Bluetooth and the power button. An additional EarFun added is a video mode linked to the Bluetooth button. Double-tap it to turn it on (indicated by a white LED), reducing latency from the standard 250ms to 150ms. It’s fine for watching a show or movie, although I found it a little slow for gaming, so probably not ideal if that’s something you had in mind. Video mode shortens Bluetooth range by 45 feet, although I can’t quantify an exact number. Neither does EarFun, except to suggest always turning this mode off when listening to music, podcasts, or audiobooks for a stable connection, especially if you’re on the move with your phone.

It would be unfair to expect audiophile playback from a speaker like the UBoom L, but the results are impressive in both clarity and volume. This speaker isn’t so much about lowering the boom, given that its bass response is still resonant and thick enough to be enjoyed, even more so when accompanied by good balance across the spectrum. Unsurprisingly, the mids are pushed back, but they’re still audible enough to complement the solid highs.

I’ve listened to a wide range of genres, both indoors and outdoors, as I took the speaker with me on a recent vacation. Its outdoor mode is much like a “loud” setting you see in other speakers, where the bass and treble boost with louder volume for bigger sound in larger spaces. Indeed, I often chose this setting when I wanted to get a bit louder, when normal indoor listening didn’t require turning things up.

For example: there was no reason to do it while listening to a podcast or an audiobook. Spoken word content just doesn’t need the same range as music, so switching between the two modes made more sense as I progressed. There were times when I used outdoor mode indoors to hear the deeper bass, while I used indoor mode outdoors while lounging with a cigar listening to a podcast or audiobook. . For a speaker lacking a lot of customization, it was pretty satisfying to at least be able to do something. When I played it loud I was impressed to hear the distortion sustain until it got really high. The outdoor mode is tuned to thump the bass and add some sibilance to the treble at higher levels, but I found the indoor mode toned that down somewhat. Again, making up for a general lack of customization.

Watching video with it via Aux-In on a laptop was great for eliminating any latency, although the video mode was fine when doing it wirelessly. The only problem is that the Bluetooth connection is more sensitive to obstacles that might get in the way. Up close it’s fine, but wander off or hold the speaker too far away, and a weird drop or hiccup will occur.

As a loudspeaker, the UBoom L also performed very well. Calls were clear and my voice came through well through the built-in microphone. It won’t match more expensive speakers, like the Sony SRS-XE200, but it’s better at capturing voices more spatially. Rather than facing it head-on, you can be on either side as the mic is on top with the row of buttons.

EarFun says the UBoom L can last up to 16 hours per charge, and that’s largely true if you keep the volume at the default level with indoor mode on. Turning up the volume and regularly sticking to outdoor mode changes that. But even north of 10 hours, it’s hard not to like the results. Go all the way and you’re killing the battery in a fraction of the time, though I’ve never held it there long enough to know exactly how much.

There’s no fast charging here. Instead, you plug in and wait for those four LEDs at the top to stop flashing. It takes a good two hours to fully charge, and of course you can still play and charge at the same time.

EarFun has simplified things with the UBoom L, focusing on what needs to work well. Excellent, balanced sound, combined with exceptional ease of use and durability, means it fits just about anywhere. Not every Bluetooth speaker at this price can make that sort of claim, so there’s real value here, if you will.

Despite the bargain price – and the likelihood of discounts along the way – the UBoom L has some competition. The Ultimate Ears Wonderboom 2 has the same level of durability, and while its battery life doesn’t stretch that far, there’s a useful strap to keep it close to you. If you like the idea of ​​customizing things through an app, you might want to look at the Anker Soundcore Flare 2, which allows you to do just that. It won’t be as loud, but the app’s equalizer lets you play around a lot with the overall setting.

If your budget allows, you may be able to get JBL Flip 5 for around $100 or less if you come across a good deal. It’s not the latest from JBL, but it can still tip over and take punishment while doing so. No apps are supported, but you get a smaller footprint for even easier portability.

EarFun was clearly aiming to build the UBoom L to last a long time with its tougher build quality. The fact that it floats also means you’re less likely to lose it in the water, but without a lanyard to attach you have to be careful. EarFun’s 18-month warranty does not cover water damage or dropping the device. It mainly focuses on functional issues.

Yes. You don’t get anything flashy with the UBoom L, but EarFun has done well with its speaker, designing it to perform better than its $80 price tag suggests.