Does This Mother Have The Right To Be Upset Over Her Son’s Engagement?

There are about a million hard things about being a parent. That said, one of the toughest things emotionally might be those moments when we have to let go. When they start school for the first time, when they start driving, when they move out, and yes, when they find someone else they want to spend their lives with – it’s all tough.

This mother reacted very badly to her son’s engagement announcement…and wait until you hear why.

The story really begins when her son lost his best friend in the world. The loss was devastating for him.

My son Adam’s (24) best friend Carlos (25) passed away over 2 years ago in a car accident, this loss completely devastated Adam to the point where he lost his job, they were like brothers and our family have known his family for years. So we’re also very devastated over this loss.

As a means of healing, he began taking care of his departed friend’s girlfriend and young child.

Carlos left behind his girlfriend and their now 4 yo son, We don’t know his girlfriend too well since he didn’t bring her around much, they were on and off til their son was born.

Adam told me he had been seeing and taking care of Carlos’s family’s needs which’s great, we were glad he was stepping up to make sure that Carlos’s family were getting help.

Adam also got a new job and we sort of had limited contact for few months.

When they visited recently, her son and his late friend’s girlfriend announced they were engaged.

He’s started visiting us lately and looked different in general, he is now more calm and smiles more often and is even open to talk about Carlos without getting too emotional. I was relieved and happy for him but last week, he contacted me and his dad and said he had something to tell us.

OP reacted oddly, wondering why her son would want to date that woman and what the late friend’s family would think.

I was in shock, I didn’t expect this at all. I didn’t know what to say but I felt upset and shocked mostly. A

dam noticed my reaction and asked what’s wrong, I told him I never expected him to get with his best friend’s partner, of all people and talked about how bad this would look to Carlos’s family who are close friends to ours.

Their argument escalated after it was clear the fiancee was upset by OP’s words, and it ended with OP asking her son to leave.

Carlos’s girlfriend excused herself and her son to the bathroom and Adam and began arguing, he went on about how I upset his fiancee and that I should be supporting him but I said that he should’ve told me, and that he shouldn’t have got together with his best friend’s partner and perhaps use her grief to get her to date him, he acted shocked and called me unbelievable that’s when I asked him to leave my house.

He did, and they haven’t spoken since. Her husband told her she’d behaved badly and should apologize, but she’s not convinced.

He got up and left with them. my husband said I messed up by making a scene and reacting the way I did. I went upstairs and stayed alone for an hour.

It’s been days and Adam hasn’t called and my husband keep trying to get me to speak to him but I kept saying I needed time.

Reddit is weighing in below, and I think I have a feeling where they’re going to land!

The top comment points out all of the very grievous mistakes that OP made. 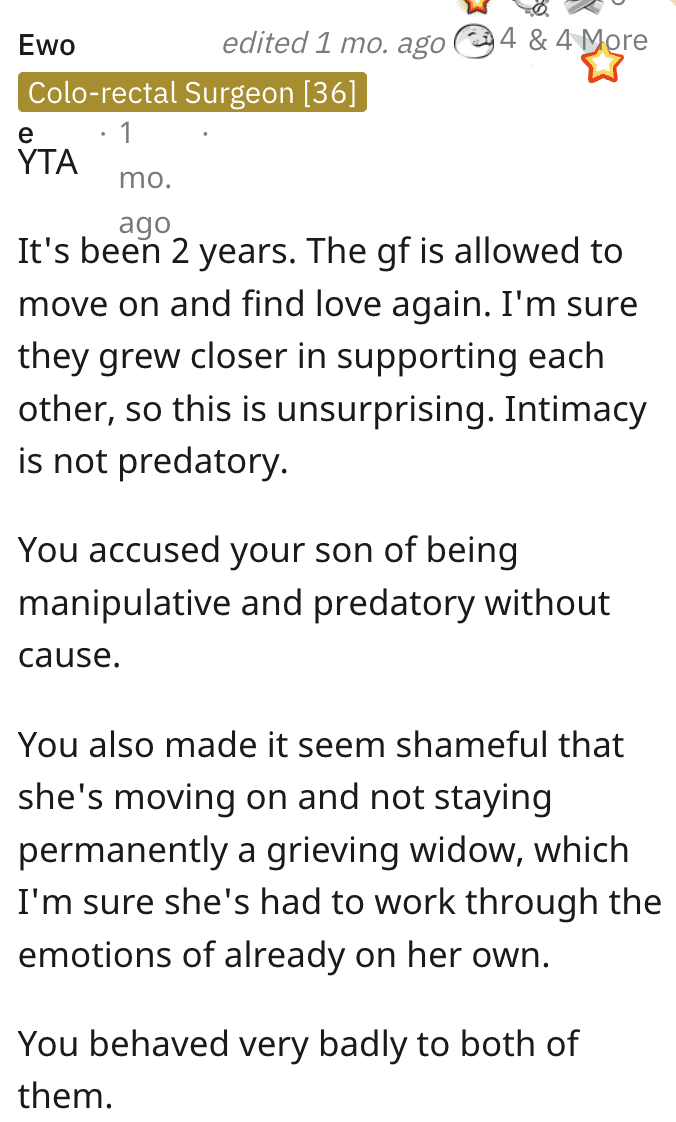 Who does she think the friend would want to be with his widow? 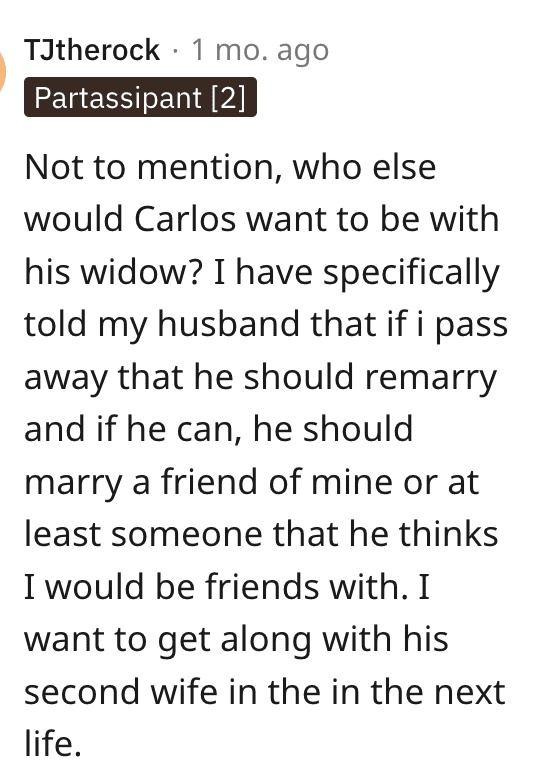 As sad as it is, the friend is gone, so he honestly doesn’t have a say in things. 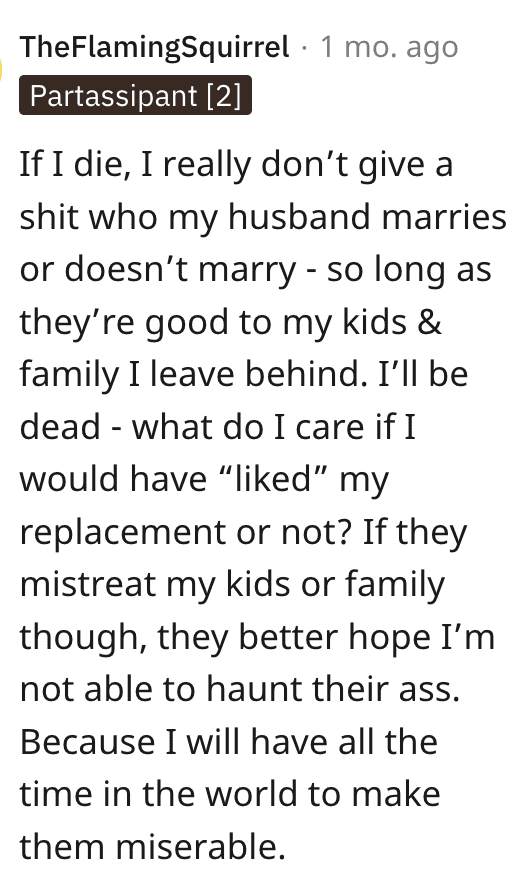 The bottom line is that maybe it’s none of OP’s business? 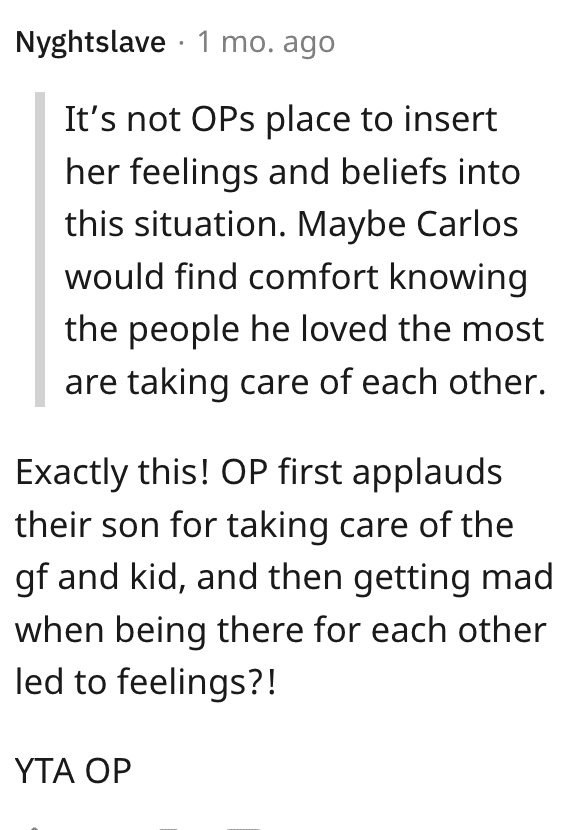 There’s no one who isn’t upset with how OP handled this entire situation. 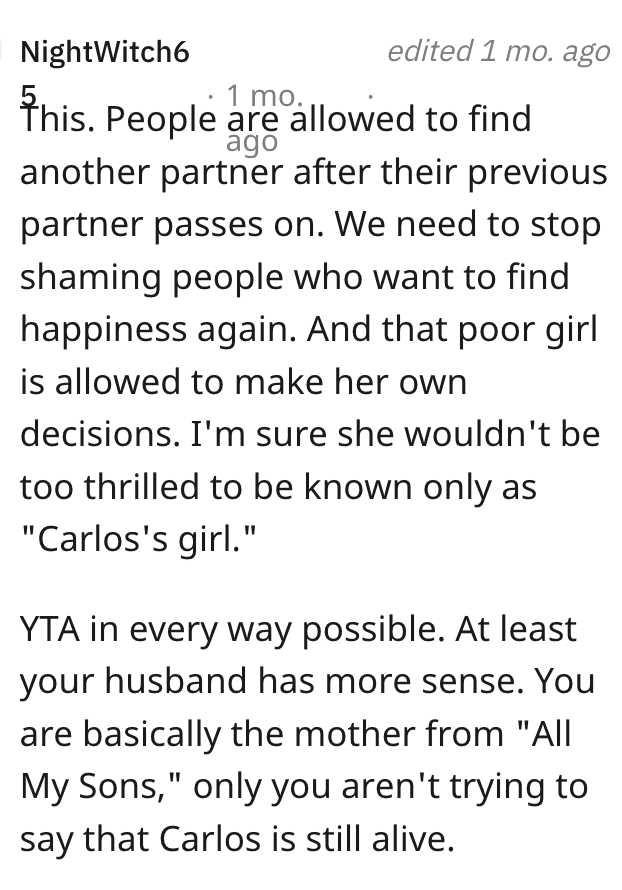 Why do you think she reacted the way she did? Let’s spitball in the comments!