I grew up in the Midwest. If you did, too, then you might know what its like to feel as if being “nice” is the best way to go about your day.

What I’ve learned as an adult (and thank goodness it wasn’t too late), is that it’s ok to decide that your safety and comfort are more important than coming off as rude.

This woman doesn’t suffer from the “just be nice” attitude, but after a brief confrontation with a man who claimed to be the former tenet of her new house, she’s wondering whether or not she took her paranoia too far.

She and her husband recently moved into a new house in a new-to-them town that’s not big or small. She’s pregnant and has an infant, and on the day in question, was home alone with the baby while unpacking boxes.

I’m a 28-year-old woman. My husband is 31 and we recently had our first child together; a little boy who’s about to be eight months old. We’ve just found out that we are expecting our second child.

We also recently moved a few states over for my husband’s work. We moved to a town that’s a bit of a cross between an old, small town and a suburb, and we ended up buying an older house.

A few weeks ago we were still getting settled in. I was working on unpacking while my son was taking his afternoon nap when I heard the doorbell.

A man showed up at the door with two young girls, stating that he grew up in the house and wanted to show it to his granddaughters.

She refused, feeling like it wouldn’t be safe to let a stranger into the house when she was alone.

I answered the front door and saw an older man (probably mid 60’s) with a couple of little girls (not sure how old they were; but likely under 10) standing on my front porch.

“Hello” he said. “I’m really sorry to drop in on you like this. My name is […] and these are my two granddaughters. This was the first house I ever lived in and I lived here until I was 12 years-old. I’ve always missed this place and I just want to see it one last time, and also show it to the grandkids since I’ve been boring them with stories about this place their entire lives.

I don’t mean to impose, but I notice you just moved in here, so would it be asking too much to just let us walk through here one time? We’ll be gone inside of 30 minutes; I promise.”

OK, now; I don’t know this man. Admittedly, he looked completely non-threatening; short, bald, chubby, and with a pleasant expression. But, still, I was a pregnant woman home alone other than my tiny, vulnerable, sleeping baby. Based on that I told him: “Geez, I’m sorry, but no. I’m just not comfortable with strangers traipsing through my house right now.”

He argued for a bit but eventually went away disappointed.

He answered: “I completely understand, but we really won’t be a bother. We won’t touch anything and we’ll be gone soon. I know this is an odd request but it would really mean a lot to me if you’d just let me in for a little bit.”

I answered: “No, sorry. I can’t do that. This is my home and I won’t let a stranger in without a good reason. Please leave.”

He said: “I think giving an aging man one last visit to his childhood home is a ‘good reason’ but OK. Can’t force you.” He then left.

When her husband arrived home, he thought she had overreacted and should have just let him show his family around his old home.

Later that evening when my husband got home I told him about the weird encounter. He told me that I should have just let the man look at the place. He said that we all get nostalgic about the places we grow up in and that it would have been a nice gesture to let this man see his childhood home.

He also said that I likely just fostered bad will among my new town mates. But I think that my comfort and safety as well as the safety of my son is more important than some random person’s reminiscing.

OP still disagrees, but what does Reddit think? Those comments are below!

This person pointed out the obvious, which is that he could have toured the home any time while it was up for sale. 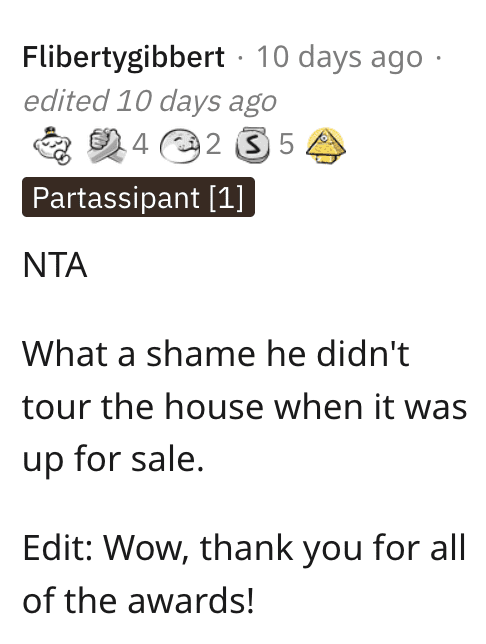 There are plenty of people on Reddit who are just as paranoid as OP, it would seem! 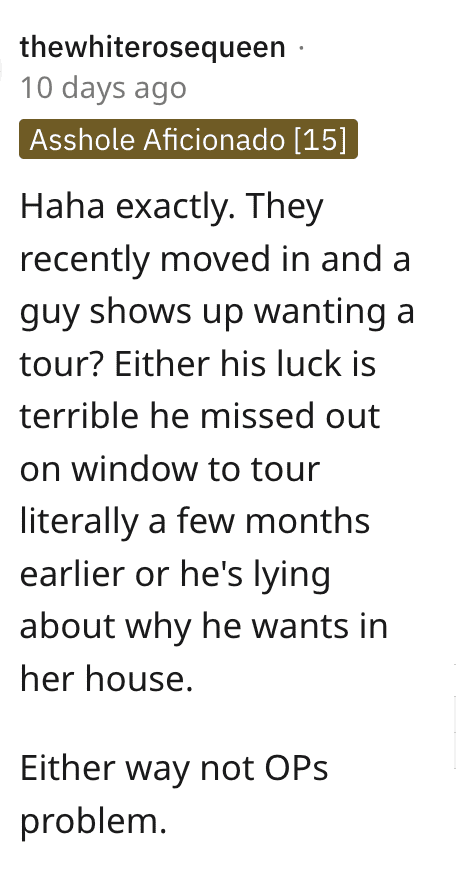 The bottom line is, of course, that you don’t have to let anyone in your house if you don’t want to.

You never can tell exactly what people are up to.

I mean, we’ve all seen Despicable Me, right? 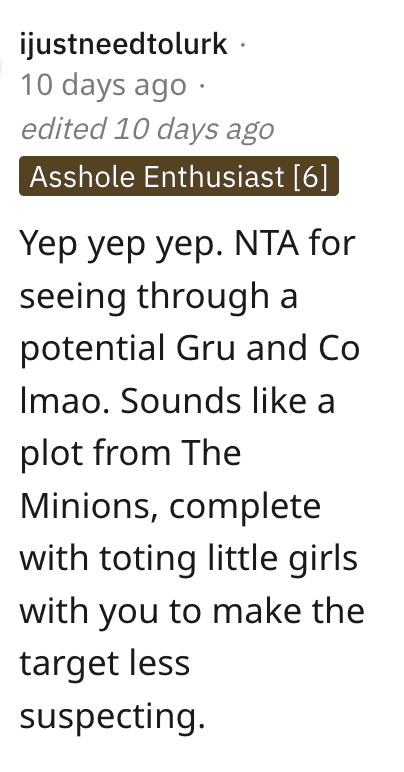 Y’all, I don’t know. I don’t think she was wrong but I do think she could have compromised and maybe set a time for him to come back when her husband would be home, too.

What would you have done in this situation? Let us know in the comments!