Does Anyone Else Have The Right To Tell You How Long You Can Hold A Grudge?

If there’s one thing I’ve learned on Reddit it’s how easy it is to lose your child’s trust – and how hard it is to get it back once you do.

Maybe that goes for all humans, but with kids, a broken heart can take a long time to heal.

OP in this case was her father’s best buddy for much of her life. She was “one of the guys” and she was fine with that – and she thought her father was, too.

My (26F) mom passed away at childbirth, so it was pretty much my father (50M) and me, with the occasional visits from my grandparents (from both sides), since I lived with just him, I took on a more masculine style and likings, like ”one of the boys” but the only boy was my father.

I was Rexy (for T-rex, because I was obsessed with them for years), I had no barbies (he bought me a few but I was like ”ew), and I had almost 0 dresses or skirts, he also did my hair really awful every time.

Then he married a woman with a daughter of a similar age. Her stepsister began bullying her for her “boyish” ways and sadly, her father did not have her back – he sometimes even joined in.

When I was around 12, he began dating this woman called Maria who had a daughter (15 at that time) named Stacy, while Maria was a total sweetheart, Stacy was horrible. She bullied me for not looking like ”a girl should do”, for liking ”man stuff” like cars, bikes and stuff like that, I have to admit that I also didn’t had many friends while growing up (neither female or males) so my person was my dad, and as I grew up I got involved with what he liked.

To make things short, Stacy would often throw awful comments about me being a boy, a weirdo, etc and my dad would do these same comments in a less-bully way, but they hurt me more because he was confirming that while Stacy was ”his daughter”, I was his ”son”.

What broke my heart was that he called Stacy ”Peach” like Mario’s princess while I was T-Rex.

When she was 15, OP decided she wanted to try more traditionally girly things, but her stepsister was still mean about it.

I did a 180° in my looks at 15, I brought dresses, skirts and dyed part of my hair a sweet pink which made Stacy laugh at me even more and my dad was like ”whoa! Pink? that’s for girls”.

In my 16th birthday, Stacy put black dye in my shampoo and ruined my whole look, I guess it was the stick that broke the camel’s back because I cried so horrible to the point of not breathing and I told my dad in front of Maria and Stacy what she had been done all of those years, along with my dad awful remarks and subtly enabling Stacy’s awful comments.

After a particularly bad incident OP blew up and the resulting fallout saw her father leaving her stepmother over the whole thing.

In the end, he left Maria and Stacy because it was obvious there was no going back for me after that, he eventually married my now step-mom when I turned 20.

He’s remarried now and the two of them have been through therapy, but she still feels resentful about the entire incident.

My dad apologized, we talked about it and a year after that we attended therapy until I was 24 I don’t like to talk about it, I think it broke my relationship with my dad in away we will never be able to fix, I know he doesn’t have my back.

Her dad brought it up jokingly in a recent conversation, but she told him she wasn’t interested in talking about it because it still hurt her feelings.

He thinks she should be over it, but she’s not.

Yesterday, while talking he tried to joke about it and I said that I didn’t want to remember it because I’ll never forgive him for joining Stacy in her bullying, he said it couldn’t be possible that I’m still holding a grudge.

I say I am, and that I always will because he absolutely broke my heart and confidence, he tried to argue, but my step-mom said that he needed to let go because my feelings are my feelings. I still cry when I remember it, but he says I’m an AH because he left them and made amends with me.

Whose side is Reddit on here? Is there a time when we should agree to just move on, no matter our feelings?

The top comment says OP is not in the wrong, and that her father’s behavior now is likely to just make things worse. 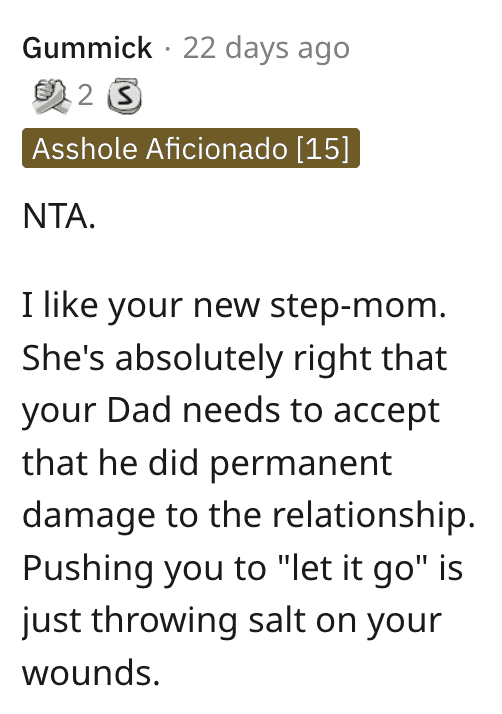 Her father would do well to listen when she tells him what a big deal it was to her. 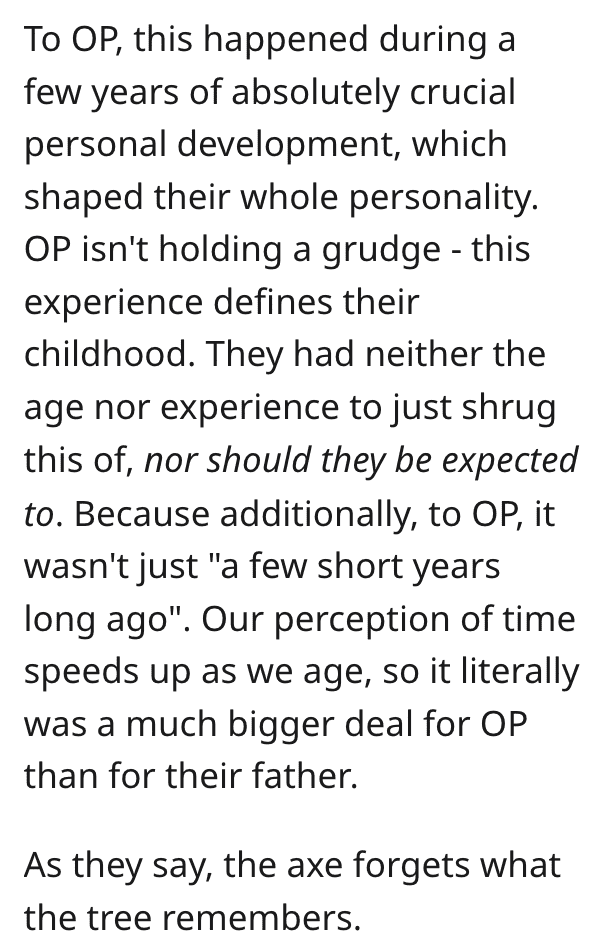 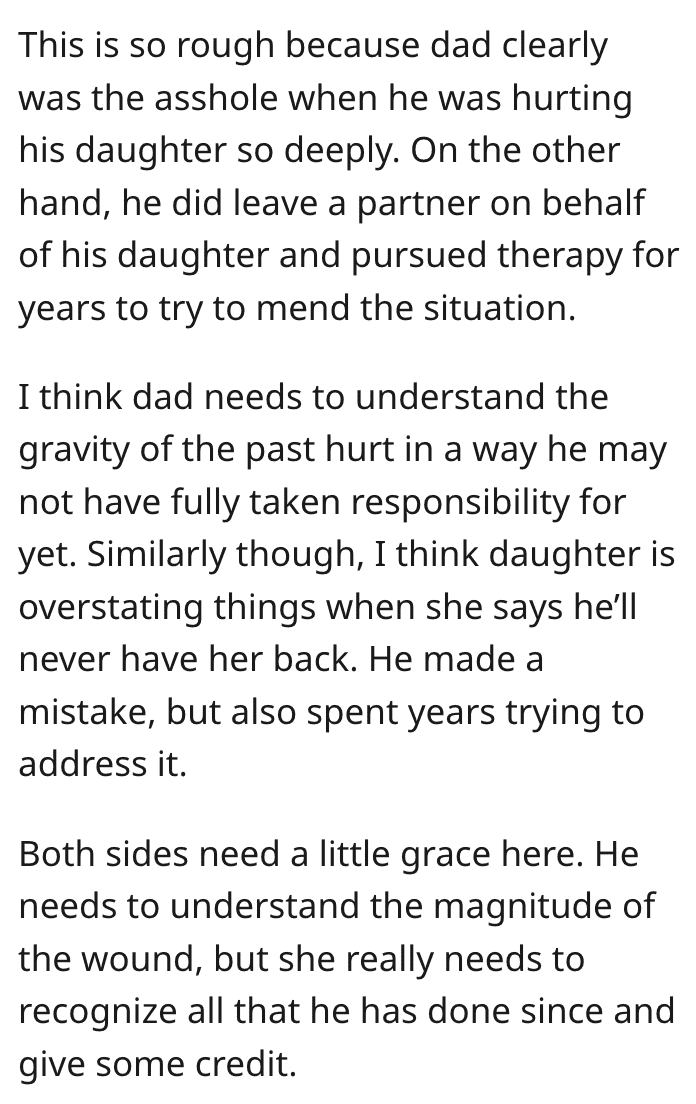 Feelings don’t have to be rational (and often aren’t). 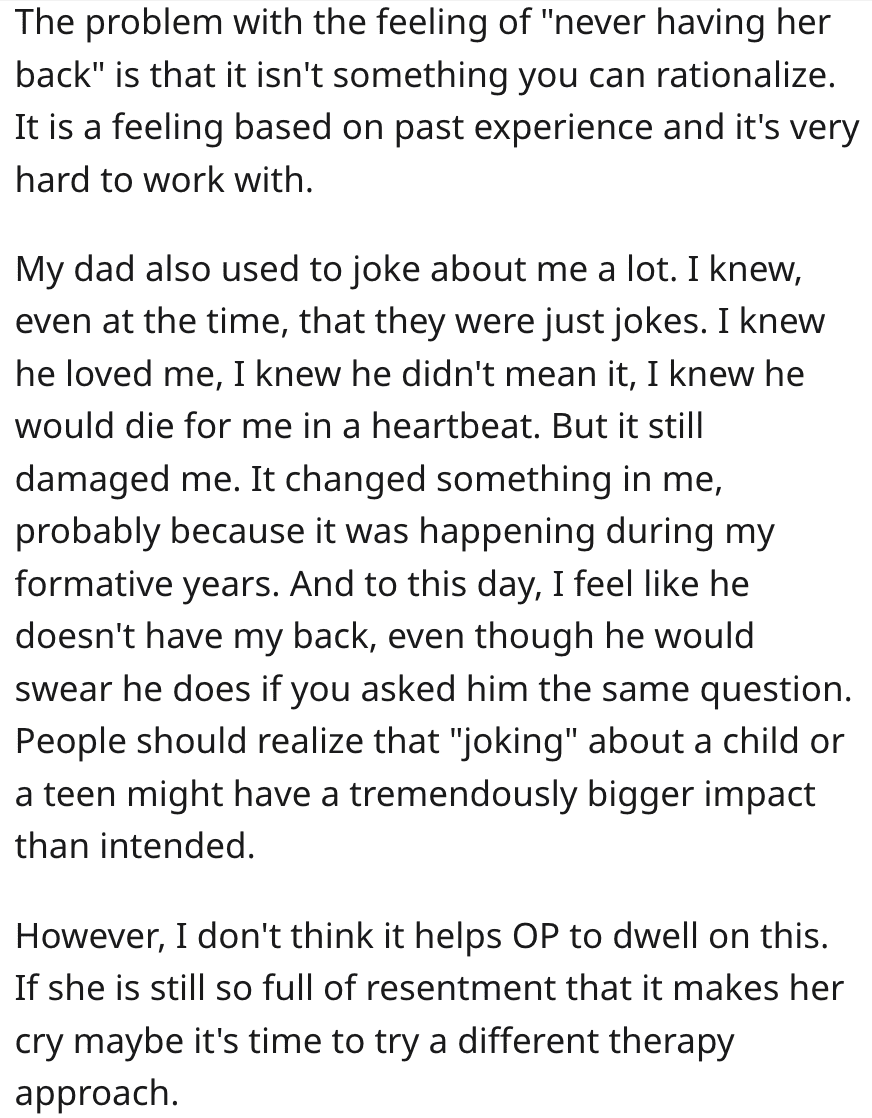 My heart hurts for this poor 16yo girl and the woman still dealing with the fallout.

If her father was your friend, what advice would you give him here? Lay it on us in the comments!