Do You Owe Your Child’s Teacher An Explanation When They Miss Class?

It’s our job as parents to not only protect our kids, but to know them better than anyone else. We’re the ones who decide when and why they can stay home from school, for example, and we’re the ones who gauge when the situation warrants a day off.

This OP’s daughter required a mental health day after starting her period for the first time, and when she called in to the office for “personal reasons” no one questioned it.

My daughter is in the 5th grade. Thursday night she got her first period and it freaked her out. She was sad she was getting older. She was up all night. Likely dealing with a lot of unfamiliar hormones.

We ended up taking the next day off for a mental health day.

I called the school and said we’d had a personal matter and she wouldn’t be in. She has a male teacher who she doesn’t really get on with so suffice it to say she wanted to keep this private.

When her daughter returned to school, her teacher – who she doesn’t like – cornered OP and demanded to know why her daughter was absent the previous day.

The next day her teacher stopped me after I dropped her off and kind of cornered me outside the building, blocking my path from leaving, which already grated on my nerves.

He asked where my daughter had been the day prior. I said we’d had a personal matter at home and it was resolved now, thanked him for his concern, and said I really must be off to work now.

OP refused, and then he said she had to tell him and threatened to report an unexcused absence.

She said she didn’t care, because her daughter hadn’t missed any school so far, and managed to escape.

He then said I had to tell him. Kind of leaning over me and dropping his voice an octave as though he were trying to lord over one of the kids. Wasn’t a fan of that either. I told him I didn’t have to do anything and if he continued to speak to me this way I might have to have a chat with the administrators.

He said if I didn’t tell him then it would be an unexcused absence. You need something like five of those for it to matter and this would be my daughter’s first so I shrugged my shoulders. (Not to mention I could get it expunged at a higher level.)

Finally I said again I really couldn’t be late to work and I pushed past and left. He called after me that he couldn’t be expected to do his job if I left him out of the loop on things like keeping my child out of school. I told him he’d have to manage.

Her husband thought OP was too “abrasive” when dealing with a teacher who might just have their daughter’s best interests at heart.

When I got to the car I vented all this to my husband who felt maybe I’d been a bit too brash and that the teacher was coming from a place of genuine concern for my daughter.

I now feel a bit badly and as though maybe I jumped to conclusions stonewalling him the way I did.

OP is asking Reddit for their thoughts, and you know they have plenty!

The top comment lays out a solid argument for why this teacher is not only completely out of line, but creepy as well. 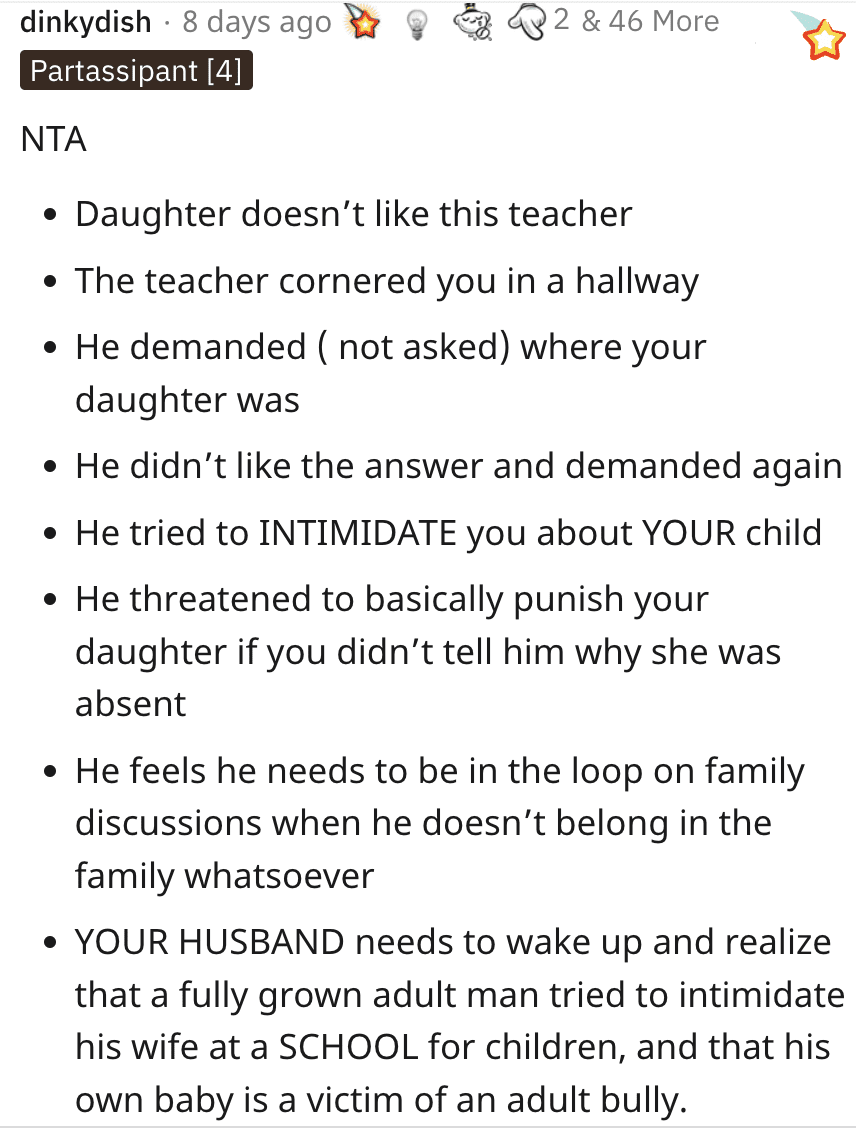 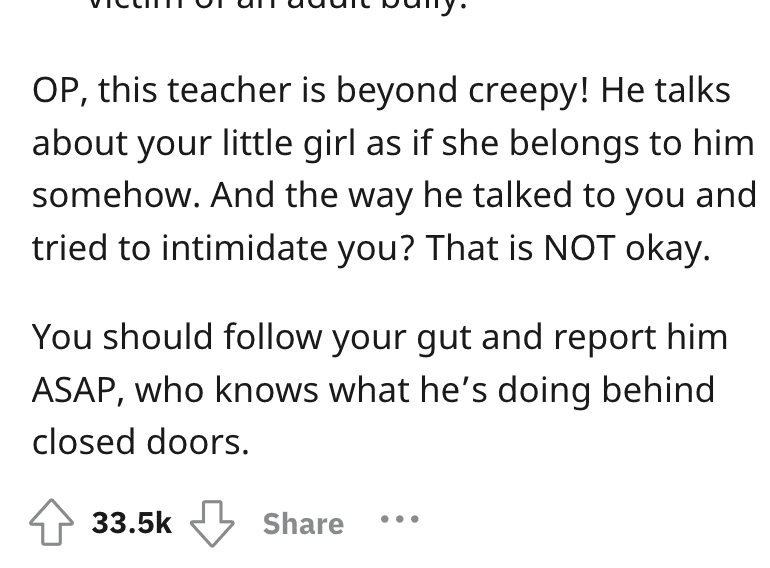 I’m very concerned about all of his students, too. 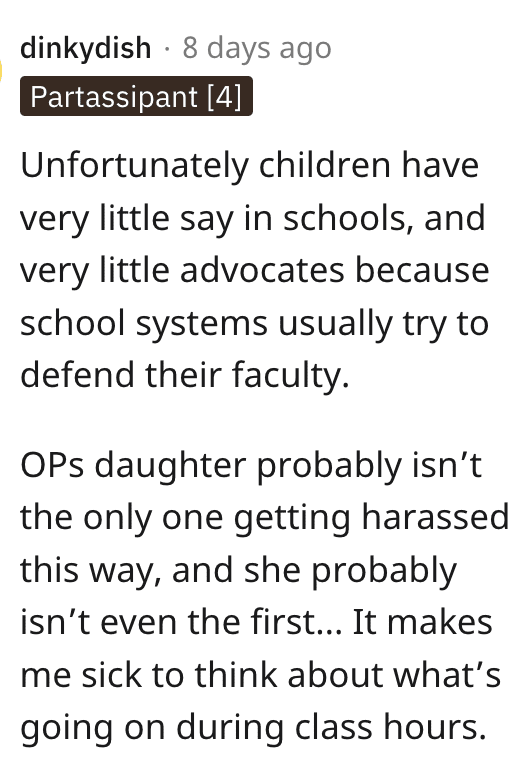 We’re all behind OP if she wants to file an official complaint. 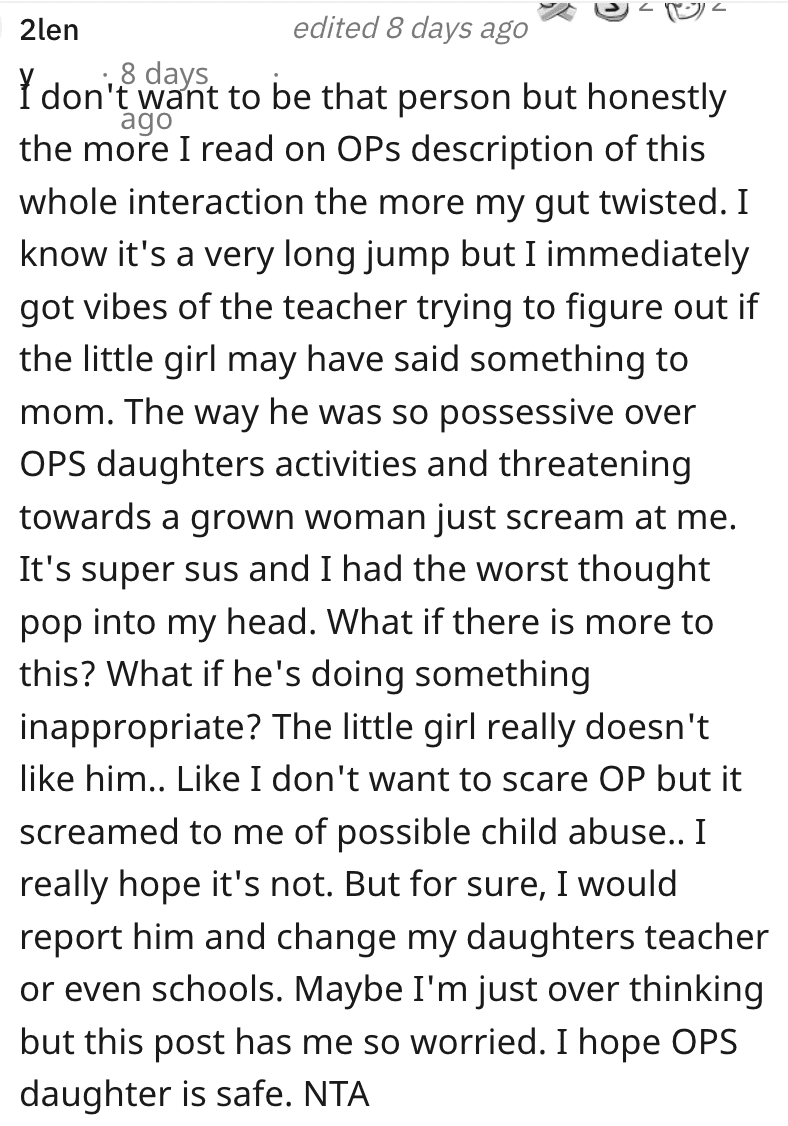 This is not a new story. 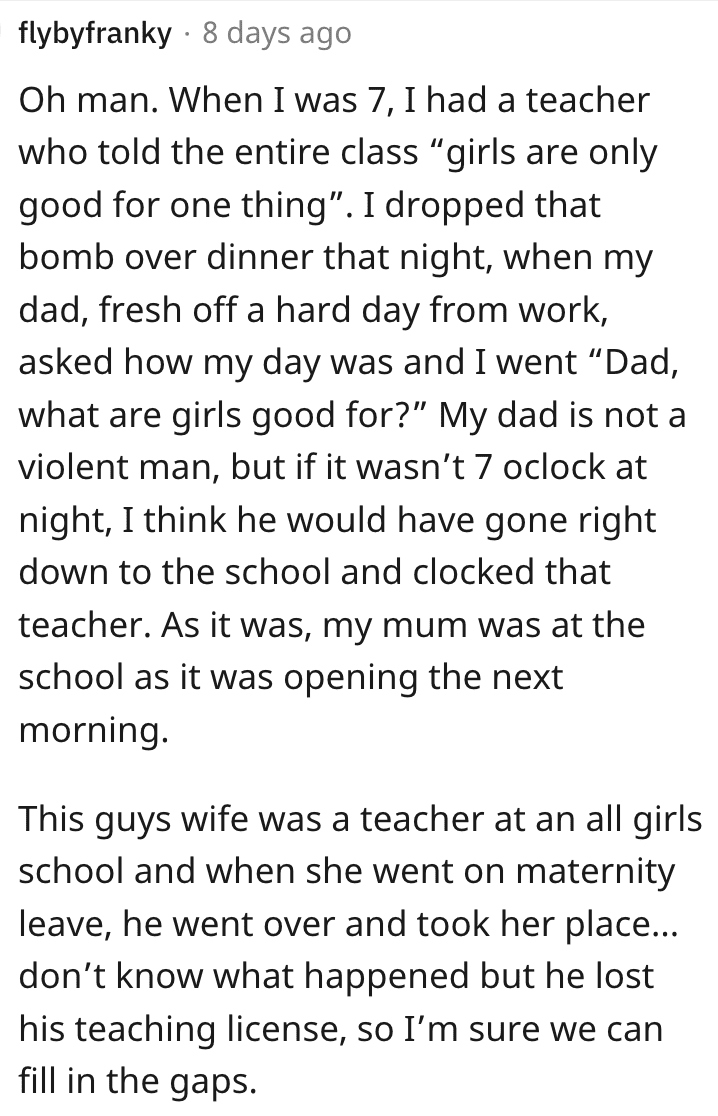 Y’all I am worried and I really wish this lady would provide an update.

How would you handle this if it was your child? I’m dying to know in the comments!