I think the obvious answer to that question is no, but I also think that cutting off contact with family on your children’s behalf is a very tricky decision to make.

People want to do the right thing by their kids. They also probably wonder whether or not those same kids are going to agree that the right decision was made once they are adults themselves.

This woman has had a hard time with her mother-in-law for years. When she married her husband he had a teenaged daughter, and though OP says they tried and even went through therapy, the girl never warmed up to her.

I’ve been with my husband since his daughter “Lina” was 13. Being a stepparent is the hardest thing I’ve ever done. To put it very simply, Lina was never happy. She didn’t want me to marry her dad, but I thought she would come around when she saw that he still loved her just as much.

She was not a bad child, wasn’t acting out, but literally nothing made her happy. She never smiled, never expressed any interest or enthusiasm about anything.

The entire time she lived at home – from 13 to 18 – her mother-in-law insinuated (or outright stated) that they must be abusing her granddaughter in some way for her to be so unhappy.

MIL was extremely concerned about Lina and kept demanding to know what we were doing to her. We had to set boundaries because MIL was asking Lina completely inappropriate questions and implying we were doing something to her.

Lina reacted badly to these boundaries and began acting out. It was such a mess, and I felt like such a failure, because no matter what we did she just was not happy. (yes she was in therapy and we did family therapy)

Now that the step/granddaughter has moved out and her mood has improved, the mother-in-law has moved to openly suggesting they must have “done” something, even though the girl herself denies it.

Lina moved out at 18 and was suddenly super happy, which just made us feel worse, and MIL was convinced we did something to her. MIL has multiple times asked Lina in front of other people what we did to her.

Lina denies that we did anything and says it just wasn’t fair that she had to live with her dad’s partner and she couldn’t relax with a “stranger” in the house.

That really hurt because I tried to bond with her and her dad tried to maintain a relationship with her, but she was just so shut down.

Now OP and her husband have had a baby, and OP doesn’t want her mother-in-law to be part of her life. She’s accused OP of being a child abuser, after all, so who knows what might happen next?

I recently found out that MIL has been calling me a child abuser. She also blatantly tells people she hates me. When confronted she cried about how hard it was on her to watch Lina like that and she knows we did something.

I’ve wanted a baby with my husband for years and we finally welcomed a baby girl 3 months ago. MIL has been acting like it is just a give in that she will meet her, but I decided that i don’t want her to.

I am too worried about having someone who hates me and makes these accusations.

Now her stepdaughter has gotten involved and threatened to cut off her own father if they don’t allow her grandmother to meet the new baby but OP wants to stand her ground.

my husband backed me, but Lina uninvited him to her graduation dinner and said that if I think I can use boundaries to bully people, then he can have fun with her new boundaries and just never see her again.

He is now very upset because Lina won’t talk to him and is saying what’s the harm in letting MIL see the baby.

Is she wrong here?

Reddit is going to weigh in on the matter below!

The top comment points out that boundaries are not bullying, and while the stepdaughter can be excused because she’s young, the mother-in-law should not be. 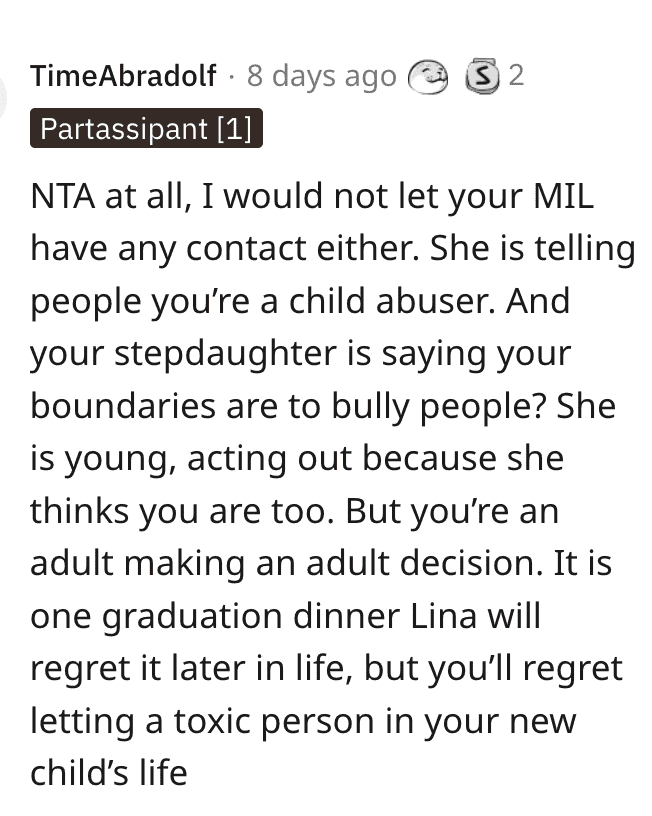 This person says giving in now will just make things harder down the line. 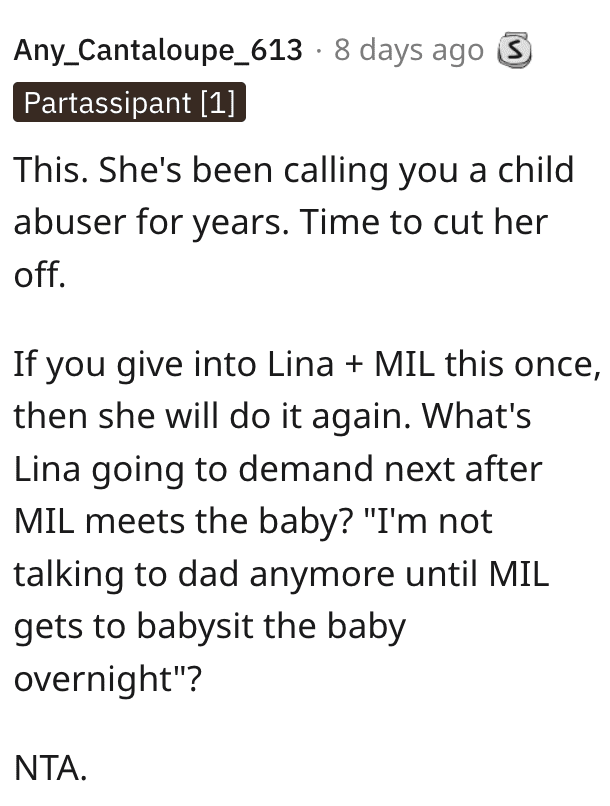 OP needs to protect her family and her life, full stop. 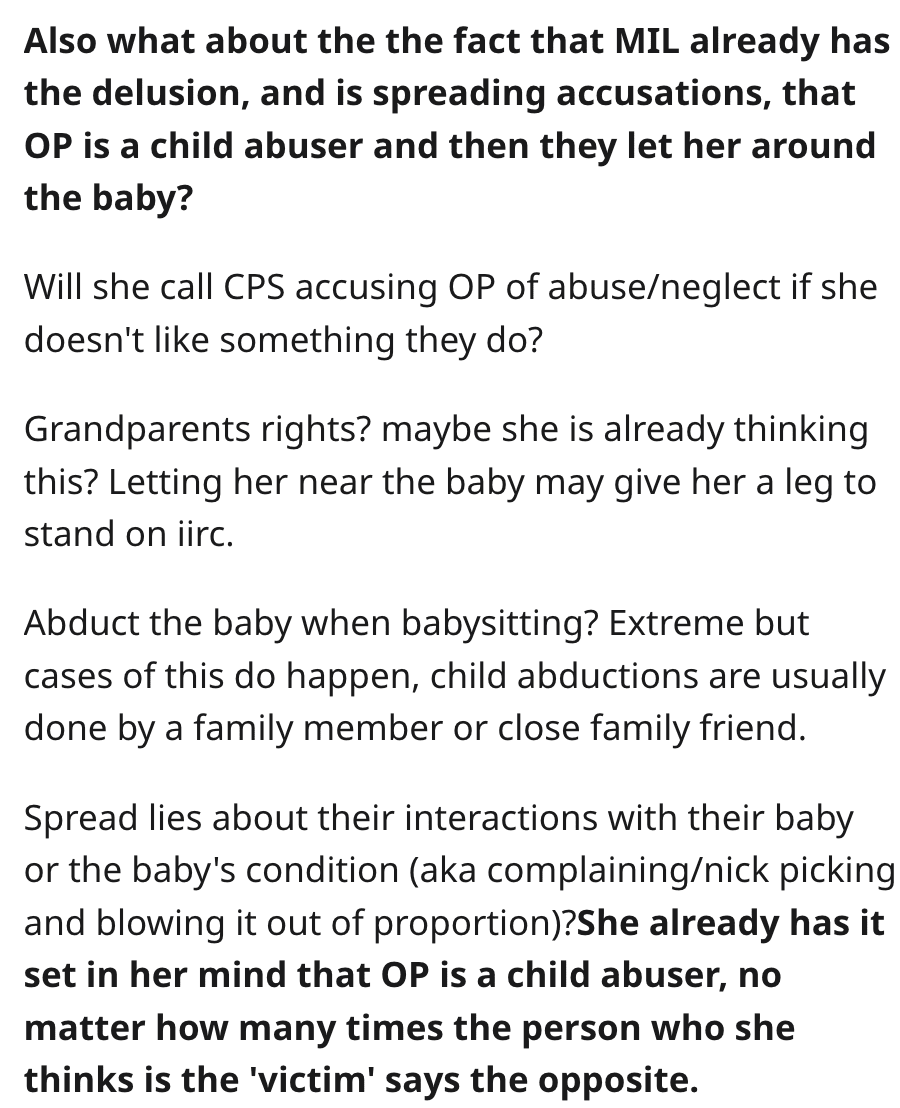 They need to put a stop to her behavior before things get any worse. 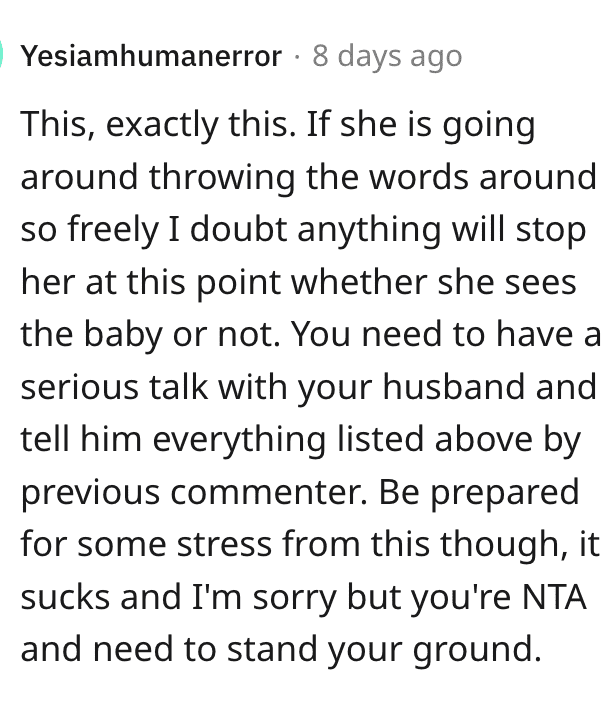 Some people aren’t as forgiving of the stepdaughter as others, though. 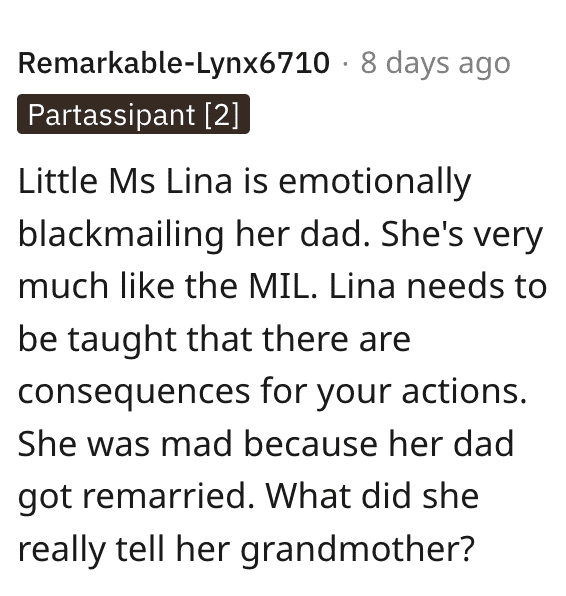 This is such a tricky situation and I truly feel badly for OP and her husband here.

Things are bound to get worse before they get better, so I hope they’re holding on tight.