Do You Have The Right To Tell Your Significant Other They Can’t Stand Up In A Wedding?

No one is going to tell you that relationships are easy, but I swear if you read enough posts on reddit/am i the a$$hole, you’ll start to realize that some people also make them harder than they have to be.

This OP is a prime example, because she wants her boyfriend to decline to be the best man at his best friend’s wedding just because she had a falling out with the fiancee.

I (26F) have been with my boyfriend (27M) for 2 years. We recently found out that we are expecting a baby, and we’re both excited about it. He has a best friend (27M) that got engaged to his fiancée (24F) over the summer, and they plan on getting married in May. He asked my boyfriend to be the best man (they’ve known each other since childhood).

Now here’s the conflict: the fiancée and I had a falling out last year. We used to be really close, but she pulled a complete 180 on me and went behind my back. When I confronted her about it back then, she looked completely confused and asked what she did and how she can fix it. I wanted to believe her but I felt that she should’ve known already why I was mad at her.

Btw, people came to me and said that the fiancé talked behind my back about something very personal to me at a bonfire last year. When I confronted her about it, she looked at me like I had no idea what I was talking about.

Her boyfriend is still close to his best friend and has a good relationship with the fiancee, and of course wants to be the best man.

OP told him he shouldn’t be in the wedding because she didn’t want to attend, and that she and their baby should be their priority.

AUTHOR’S NOTE: It’s discussed at some length in the comments, but OP will not be more than 6 months pregnant at the time of the wedding.

My boyfriend is still close to both his best friend and the fiancée to this day since he’s known them before dating me. He mentioned that he could bring me to the wedding in case something happens with my pregnancy.

I told him that I wasn’t going to sit through and watch someone who betrayed me celebrate love. My boyfriend understood that, but he told me that being the best man was very important to him. I lost it and told him that if I’m not going to the wedding, then he shouldn’t be his best man and should prioritize me and the baby.

He dropped the conversation after that.

Her friends think she’s being unreasonable, and that she should give up the drama with the fiancee (soon spouse) and move on, because it’s not fair to her boyfriend otherwise.

I told some of my friends this, and they said though the pregnancy is important for him to be attentive to, I should move on from the drama and let him be there for his best friend’s big day.

I still stand firm because it’d be awkward with his fiancé if I went, and his best friend can find someone else to be his best man. AITA?

What does Reddit think? I’m almost afraid to find out!

The top comment points out that OP never even gave the fiancee a chance to explain, for one, but if that’s how she wants to be it shouldn’t be her boyfriend’s job to sit at home and be angry over potentially nothing, too. 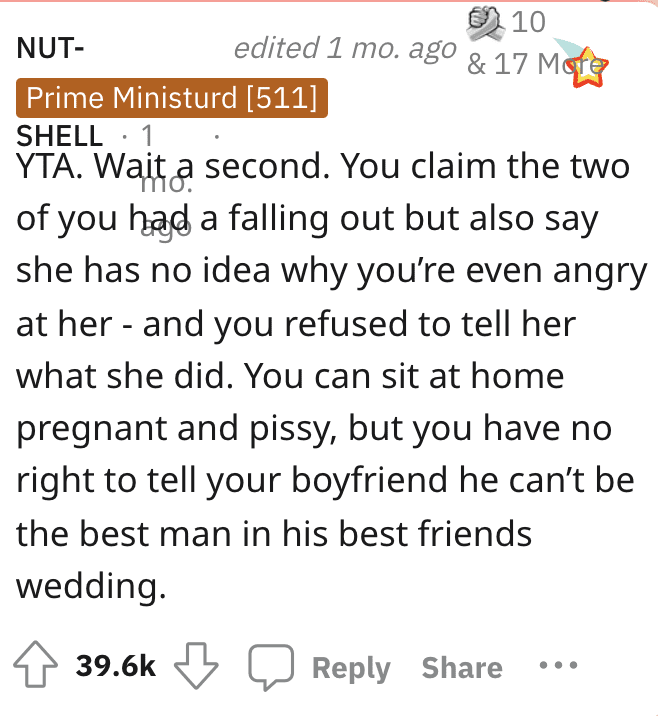 The whole reason for the falling out is vague, and thinking the fiancee should be a mind reader about why smacks of immaturity for sure. 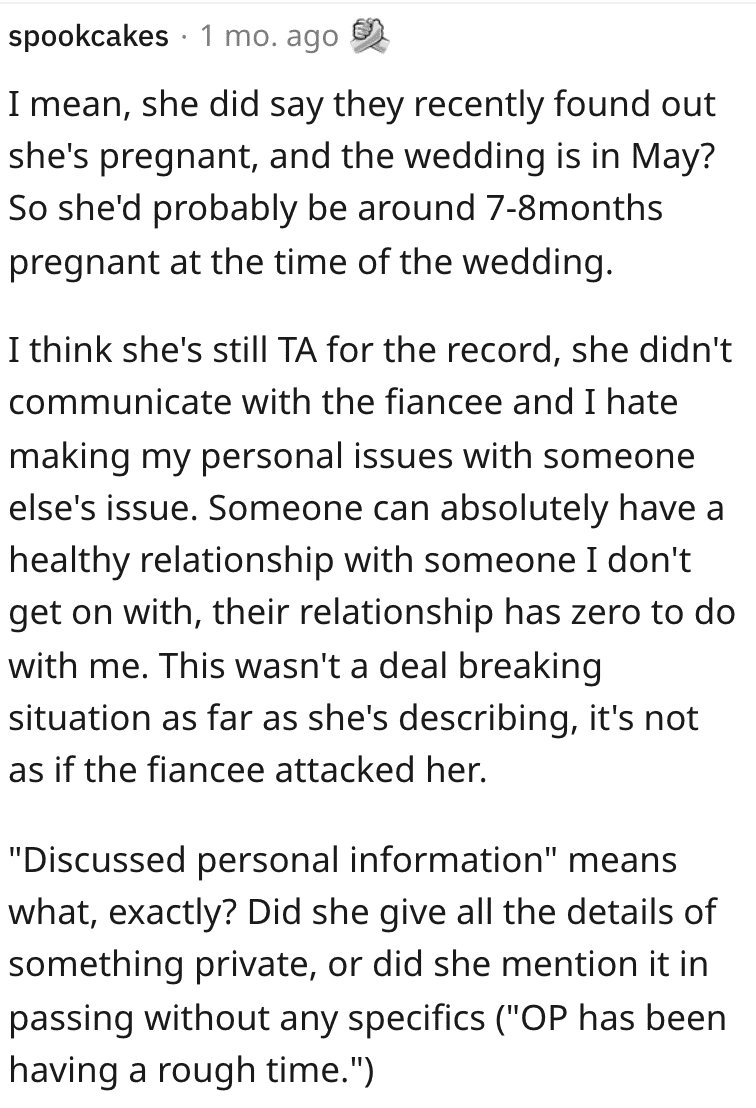 She’s about to have a baby so maybe she should work on being an adult before that happens. 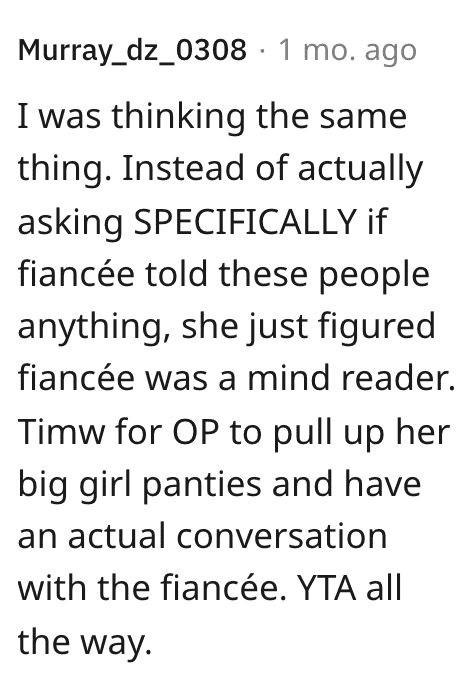 This person points out her inability to consider her bf’s point of view in the whole thing is pretty darn selfish. 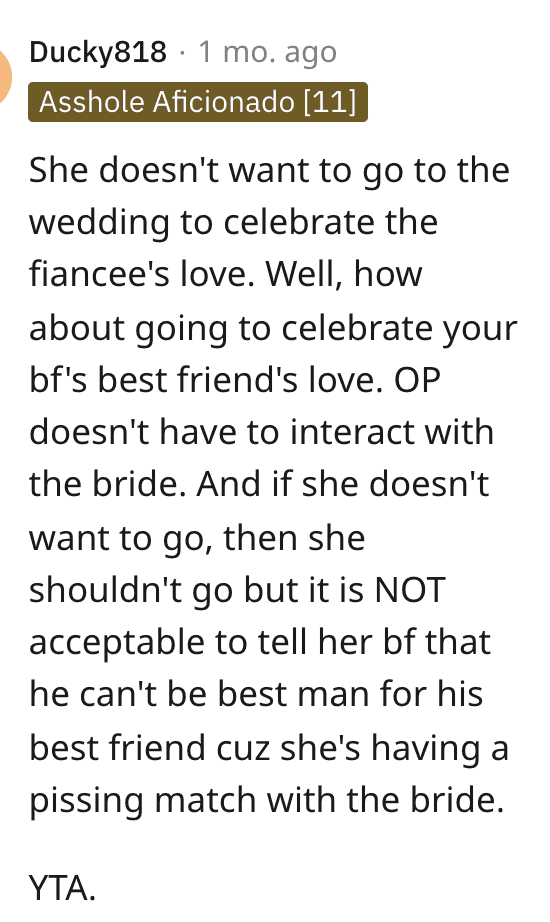 Everyone else just might decide they don’t need all of this drama in their lives. 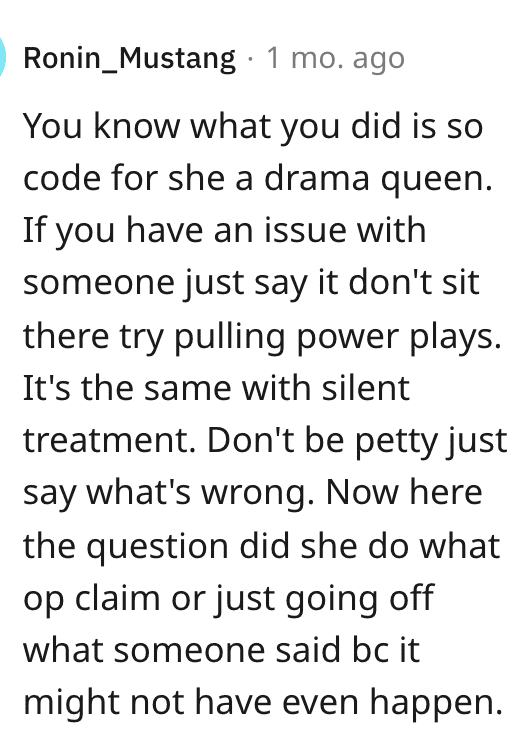 I decided I wasn’t on her side as soon as she described her encounter with the fiancee and not bothering to explain why she was so upset with her. Bah.

If you were her boyfriend, what would you do? Drop some thoughts on us in the comments!